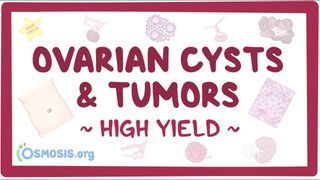 65-year-old Rebecca presents to the clinic with several months of abdominal discomfort, bloating, and a change in bowel habits.

Her past medical history is significant for endometriosis.

Menarche was at age 10 and menopause at age 57.

On physical examination, a slightly painful nodule is palpated around the umbilicus.

Later that day, 6-year-old Gloriana is brought to the office by her mother, who is worried that her daughter is more “womanly” and taller than the other girls her age.

Over the last few months, she has also occasionally complained of vague abdominal pain.

The child’s height is also in the 96th percentile.

Based on the initial presentation, Rebecca and Gloriana’s symptoms are caused by some form of ovarian mass.

Starting with ovarian cysts, these are fluid-filled sacs on or in the ovaries and can be classified into simple and complex cysts.

Simple cysts are generally small, they contain a clear serous liquid, and have a smooth internal lining.

The classic example is a follicular cyst which is a dominant follicle that fails to rupture before ovulation and keeps growing.

In fact, follicular cysts are the most common type of ovarian mass in young individuals.

For your test, remember that if you encounter multiple follicular cysts, they are usually associated with polycystic ovary syndrome, or PCOS.

Another type of simple cysts are the corpus luteum cysts.

Normally, after ovulation, the follicle remnants become the corpus luteum, which regresses during the luteal phase.

If instead of regressing, the corpus luteum continues to grow, then the arteries nourishing it can rupture and hemorrhage into the cyst.

So a high-yield fact to know is that corpus luteum cysts are also called hemorrhagic cysts.

The last kind of simple cysts are theca lutein cysts.

These are caused by overstimulation by human chorionic gonadotropin, or hCG, a hormone that’s produced by the placenta, so they’re only seen in pregnancy.

For your test, keep in mind that since hCG stimulates growth of the follicular theca cells and resting follicles can be found on both ovaries, these cysts are usually bilateral.

Another important thing is that theca lutein cysts are much more likely to develop when there’s more hCG than usual, so the scenario will usually include multiple fetuses, or gestational trophoblastic disease, like hydatidiform mole, or choriocarcinoma.

Ok, now, the second category of cysts are complex cysts.

These are generally large, have irregular borders, internal septations creating a multilocular appearance and the fluid inside these cysts tends to be heterogeneous, meaning there’s something other than fluid inside it.

In many cases, a complex cyst could be part of an ovarian tumor.

For your exams, remember that epithelial tumors account for over seventy percent of all ovarian tumors.

The other thirty percent comes from germ cell and sex cord-stromal tumors.

Epithelial ovarian tumors can then be subdivided into four types: serous, mucinous, endometrioid and transitional.

Serous tumors are usually cystic and full of watery fluid.

Mucinous-type tumors are similar to the serous type, but they’re full of a mucus-like fluid, which is where they get their name.

Both serous and mucinous tumors can be benign, malignant, or borderline, meaning that they have a mix of benign and malignant characteristics.

The benign type is called serous or mucinous cystadenoma.

Cystadenomas are usually a single cyst lined with simple cuboidal and columnar cells.

On your test, they most commonly arise in premenopausal women who are between thirty and forty years old.

What sets them apart is that serous cystadenomas, which are the most common type of ovarian cyst, tend to be bilateral and are lined with fallopian tube-like epithelium.

On the other hand, only five to ten percent of mucinous cystadenomas are bilateral, and they are lined with mucous secreting epithelium.

The malignant type is called serous or mucinous cystadenocarcinoma.

Cystadenocarcinomas have a thick, shaggy lining due to inflammation, edema and overcrowding of the epithelial cells.

They are also more common in postmenopausal women.

The serous type is the most common malignant ovarian neoplasm and they tend to be bilateral.

Another high-yield fact to remember is that serous cystadenocarcinomas contain psammoma bodies which are circular plaques of calcium deposits around necrotic or dead cells.

On the other hand, an important clue to the mucinous type is that it can cause pseudomyxoma peritonei, pseudo meaning false, myxoma meaning mucinous tumor, and peritonei telling us its location.

So the mucinous material can leak from the ovary into the peritoneum, resulting in metastasis to the appendix or other parts of the GI tract.

Finally, there is a borderline type of both serous and mucinous tumors and it has a mix of characteristics from both benign and malignant types.

The one thing to keep in mind here is that it usually has a better outcome than the malignant type since it is not as likely to metastasize.

So then we’ve got tumors from endometrial cells, which are called endometriomas.

These are benign cysts within the ovary that occur in endometriosis, which is when endometrial tissue from the uterus grows on the ovary.

Because they’re functionally the same as the endometrial tissue inside the uterus, endometriomas respond to hormones just like the uterus would.

And because of this, endometriomas tend to bleed within the cyst cavity during menstruation, and over time, they fill up with old blood that turns a dark brown color.

If these cysts get too large, they can rupture and spill their “chocolate-like” contents inside the peritoneal cavity.

Another commonly tested fact is that there’s a very rare subclass of endometriomas, the endometrioid tumor, which is malignant and composed of endometrial-like glands.

The last type of epithelial tumors come from transitional cells, and these are better known as Brenner tumors.

They are benign and made up of bladder like tissue which gives them a pale yellow tan color.

A high-yield fact here is that under the microscope, the cell nuclei are “coffee bean shaped”.

In rare cases they can transform into squamous cell carcinoma.

Alright now that we’ve looked at the epithelial tumors, let’s shift gears and go over the germ cell tumors.

These are the second most common type, accounting for about fifteen percent of all ovarian tumors.

They can be divided into four subtypes classified by the type of tissue produced by the germ cell, which are fetal, oocyte, yolk sac, and placental tissue.

Starting with tumors from fetal tissue, these are called teratomas and are divided into two types.

The first is mature cystic teratoma, also known as dermoid cyst, that has fully developed tissue inside, like skin, hair, nails etc.

These are actually the most common ovarian tumors in females between ten and thirty years old and are bilateral in ten percent of cases.

What’s important is that they tend to be benign.

This is unlike mature testicular teratomas in male adults, which tend to be malignant.

However, rarely, they can undergo malignant transformation into squamous cell carcinoma.

A special, high-yield type of mature cystic teratoma that only contains thyroid tissue is called a struma ovarii.

These tumors can secrete T3 and T4, leading to hyperthyroidism.

So if a question asks about a female with hyperthyroidism, normal thyroid physical examination, low TSH, and an ovarian mass, think of struma ovarii.

The other type is immature teratoma which has undifferentiated fetal tissue, and this is most commonly neuroectoderm, the embryonic precursor to neural tissue.

For your exams, it’s important to know that it tends to be malignant and very aggressive, meaning they tend to be invasive.

They typically present quite early, before the age of twenty.

Next, tumors from oocyte tissue are called dysgerminomas, and are the most common malignant type of germ cell tumor.

They are most common in adolescents.

For your exams, remember that on microscopic examination, the tumor cells are large with central nuclei surrounded by clear cytoplasm.

Another high-yield thing to know is that this is the ovarian analogue of testicular seminoma.

Lactate dehydrogenase or LDH as well as human chorionic gonadotropin or hCG are both markers for this tumor.

What’s high-yield here is that these are the most common germ cell tumor in children.