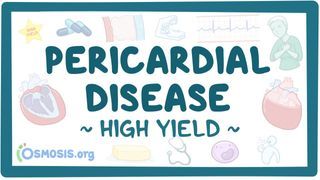 Two people came to the emergency department. One of them is 55 year old Pamela who has sharp retrosternal chest pain that gets worse when she breathes in.

On chest auscultation, a friction rub can be heard.

The other person is 43 year old Thomas, who had been in a car accident and now presents severe hypotension and on physical examination, his neck veins are distended, his heart rate is really high.

An ECG was ordered for both individuals.

Okay, based on what we know about the individuals, we can assume that both suffer from pericardial disease.

The pericardium is a sac that covers the heart and the roots of the great vessels.

The pericardium has two layers, an inner serous layer and an outer fibrous layer.

The space between the two layers is the pericardial cavity that cushions the heart from any kind of external jerk or shock - like a shock absorber.

The pericardium also fixes the heart to the mediastinum, to prevent it from twisting, so that the large vessels don’t get pinched shut.

Now for pericardial disease, we should start by talking about inflammation in the pericardium, which is called pericarditis.

People who develop pericarditis are also at risk of developing a pericardial effusion where the inflammation causes fluid to accumulate around the heart.

Pericarditis is in most cases idiopathic.

It can also be due to a viral infection, like Coxsackie B virus.

Pericarditis can also be seen in autoimmune diseases, like rheumatoid arthritis or systemic lupus erythematosus, because the immune system attacks our own tissues, including the pericardium.

Basically, when heart cells die in a myocardial infarction, it attracts white blood cells to the area, leading to massive inflammation that also involves the serous pericardium.

Another cause is uremia, which is when blood levels of urea gets really high and this usually happens due to kidney failure.

Cancers like lung cancer and lymphoma can also lead to pericarditis, due to metastasis that reach the pericardium, irritating it.

Finally, there’s radiation therapy that can also lead to pericarditis.

Now, sometimes, when the inflammation persists, immune cells can initiate fibrosis of the serous pericardium which can produce an inelastic shell around the heart, making it hard for the chambers to expand and this is called constrictive pericarditis.

For your tests, remember that the most common cause of constrictive pericarditis in high- and middle-income countries is idiopathic or viral infection, while in lower-income countries, it’s tuberculosis.

In a test question, it might often also appear as a consequence of chest radiotherapy.

Now, both ventricles can’t fully expand and fill with blood.

So, from the left ventricle, all that blood backs up into the lungs, specifically in the pulmonary veins and capillary beds which can increase the pressure in these vessels.

And from the right ventricle, blood accumulates in the veins of the systemic circulation.

One common manifestation of this is jugular venous distention, where the jugular vein that’s relatively close to the heart becomes enlarged and distended.

One fact that you have to remember here is that normally, during inspiration, the jugular venous pressure falls, because blood returns to the right ventricle.

However, in constrictive pericarditis, the right ventricle isn’t as compliant.

So, in this case, during inspiration, the jugular venous pressure will paradoxically rise and this is called Kussmaul’s sign.

Also in the body, when blood backs up to the liver and portal circulation, it causes hepatomegaly or liver distention, as well as portal hypertension and ascites, which is the accumulation of fluid in the peritoneal cavity.

Finally, fluid that backs up into the interstitial space in the soft tissues of the legs causes pitting edema, which means that the tissue is visibly swollen and when you apply pressure to it it leaves a “pit” and takes awhile to come back to its original place.

The main symptom of pericarditis, which is extremely high yield, is severe, sharp retrosternal chest pain, that radiates to the neck, shoulders, and back, and it typically happens with each breath during inspiration.

That’s because the lungs expand during inspiration, filling the thoracic cavity and compressing the pericardium.

For diagnosis, the most important clue is that upon auscultation, there’s a pericardial friction rub which is a scratchy, grating, high-pitched rub resembling the sound of leather rubbing against leather.

Also, for your tests, remember that PR segment depression is a very specific ECG finding in pericarditis.

On imaging, pericarditis can show up as an enlarged heart on chest X-ray, and an echocardiogram can show fluid in the pericardium.

In constrictive pericarditis, a CT can detect calcifications and thickening of the pericardium seen in a CT scan.

Okay, there’s one more thing to talk about: cardiac tamponade.

Pericarditis can lead to pericardial effusion when fluids begin to pool in the pericardial space, and the serous pericardium can’t remove it as quickly as it builds up.

In general, cardiac tamponade can result from pretty much anything that causes rapid accumulation of fluid inside the pericardium.