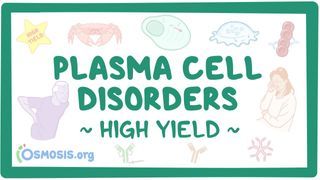 At the family medicine department, a 70 year old male named Ian came in with progressive fatigue and chronic back pain.

His lab tests show anemia with an MCV of 90. as well as increased calcium, blood urea nitrogen and creatinine levels. Peripheral blood smear showed the following.

Next to Ian, there’s a 65 year old female named Amanda that complains of progressive fatigue, recurrent nosebleeds and blurred vision.

Although their symptoms are very different, both Ian and Amanda have a plasma cell disorder.

Plasma cell disorders are a group of hematological malignancies that are characterized by unregulated proliferation of plasma cells in the bone marrow.

They include multiple myeloma, monoclonal gammopathy of unknown significance or MGUS(em-gus), and Waldenström’s macroglobulinemia.

Each of them produce a monoclonal or M-protein, which is a unique protein of a single type, like a protein “clone”.

Alright, now let’s take a closer look at these different plasma cell disorders, starting with multiple myeloma, which is the most common primary bone tumor in people older than 40 to 50 years of age.

In multiple myeloma, the most common M-protein produced is IgG, followed by IgA, and these immunoglobulins have both a heavy and light chain.

More rarely, the myeloma cells can only make the kappa or lambda light chain of the immunoglobulin, and in that situation, the resulting protein is called the Bence-Jones protein.

A high yield concept is the clinical presentation of multiple myeloma, which can be summarized with the mnemonic CRAB (like the animal), “C” is for hypercalcemia, which results from increased osteoclast activity due to the release of osteoclast activating factor from the malignant plasma cells, which resorbs the bone and releases free calcium into the circulation.

Remember that your exam might not just give you the lab finding, but instead give you some symptoms of hypercalcemia, such as abdominal pain, psychiatric changes, constipation or fatigue.

Okay, “R” is for renal disease, which can be caused by multiple mechanisms.

First, the light chains can deposit in and obstruct the renal tubules, and this is called light chain cast nephropathy, or myeloma kidney.

Renal disease can also be due to type two renal tubular acidosis, or even hypercalcemia which may cause the formation of calcium phosphate kidney stones.

These include restrictive cardiomyopathy, a large tongue, also called macroglossia, and nephrotic syndrome to name a few.

So on the exam, beware of primary amyloidosis being a presenting feature of multiple myeloma. “A” is for anemia, which causes fatigue and shortness of breath.

The anemia occurs because the malignant cells infiltrate the bone marrow, and disrupt the normal production of red blood cells.

Finally, “B” is for bone pain, which is due to increased osteoclast activity causing pathologic fractures and lytic bone lesions.

So, in the exams, look for an elderly individual with symptoms of anemia and chronic back pain.

Serum and urine protein electrophoresis, or SPEP(es-pep) and UPEP(you-pep), respectively, are important to see which M protein is predominantly being produced, and is seen as an M-spike.

Serum levels of beta-2 microglobulin are checked in multiple myeloma, because the higher they are, the more severe the disease.