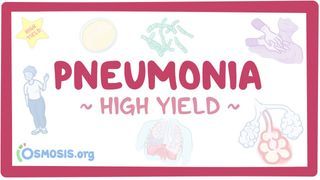 Two people came to your clinic one day.

Mariah is a 54-year-old smoker, who came in with with productive cough with yellow sputum and left-sided chest pain.

Physical examination reveals fever, tachycardia, and tachypnea. Her lung sounds are barely audible, but it had crackles at the left base.

Next is Jeremy, a 64-year-old man who was hospitalized for a stroke 2 weeks ago.

He recently developed a cough and right-sided chest pain.

Now, both people have pneumonia.

So pneumonia is an infection of the lung tissue.

Some microbes can overcome the innate defenses of the lungs and immune system to colonize the bronchioles or alveoli.

These pathogens then triggers an inflammatory response.

Inflammatory cells, such as white blood cells, dead bacteria, proteins and fluid from the damaged tissue, form a fluid called exudate which can be coughed up and expelled from the body.

However they can also accumulate in the lungs, filling up the alveoli.

We can divide pneumonia into “classic” pneumonia or “atypical pneumonia based on symptoms.

So with classical pneumonia, high yield symptoms might include dyspnea, or shortness of breath, fatigue, and fever.

Individuals might also develop pleuritic chest pain, which is characterized by sudden and intense sharp, stabbing, or burning pain in the chest when inhaling and exhaling; and productive cough with yellow sputum.

Besides these, High yield signs that might come up on your exam include dullness to percussion, which suggests that there’s a lung consolidation.

This occurs because the air in the alveoli is replaced by pus and fluid so the sound will lose its normal tympanic or drum-like quality.

There’s also tactile fremitus, which is when you can feel increased vibrations when you place your hand on the individual’s chest or back on the area with the consolidation and they say 99.

Similarly, if you auscultate the area with the consolidation, the “99” will sound louder and this is called bronchophony.

This is because sound waves and vibrations travel better through the fluid-filled consolidated tissue than air-filled healthy tissue.

For a similar reason if you put your stethoscope on the area with the consolidation, you can hear bronchial breath sound where the sound of air moving in the bronchi is transmitted clearly through the consolidated area.

This is higher pitched and louder than the normal vesicular breath sound where sound waves pass through more air filled alveoli.

Next is egophony which is increased resonance in the area with consolidation, so when asked to say the “E” it will sound like the letter “A.”

Late inspiratory crackles can also be heard over the affected area.

Crackles are popping lung sounds made when air passes through the fluid in the collapsed alveoli. Finally, people with pneumonia will often have tachypnea and tachycardia.

Now, there are many ways to categorize pneumonia.

One way would be by the causative microbes.

Usually, pneumonia is caused by viruses and bacteria, and rarely fungi as well. In adults, the most common viral cause is influenza.

This type usually has an abrupt onset and tends to develop secondary bacterial pneumonia.

Next is the typical pneumonia, or the classic bacterial pneumonia and its most often caused by either streptococcus pneumoniae, haemophilus influenzae, or staphylococcus aureus.

“Atypical or walking pneumonia” is also caused by bacteria, but the individual won’t develop the classic symptoms.

In atypical pneumonia with mycoplasma pneumoniae, a bacteria without a cell wall, individuals usually present with insidious onset, headache, nonproductive cough, and sometimes, no fever.

If you see these symptoms in a question prompt, it’s safe to assume the answer is atypical pneumonia with mycoplasma pneumoniae.

Another clue is that it tends to occur in areas with many people packed together like in military recruits training camps and prisons.

This bacteria can be found in water-systems or water-based cooling systems in hotels, which is why this infection is also common in travelers.

The next high yield concept is that people in certain age groups are more at risk for certain types of microbial infections.

In neonates, or those younger than 4 weeks, the most common cause of pneumonia are Group B streptococci and Escherichia coli.

In those 4 weeks to 18 years, the condition is typically caused by viruses like the Respiratory syncytial virus, but also by bacteria such as Chlamydia trachomatis, which is more common in those younger than 3, and Chlamydophila pneumoniae, which is usually found in school-aged children.

Streptococcus pneumoniae is also a common cause of pneumonia in this age group.

Next, in those 18 to 40 years, the most common causes are Mycoplasma, Chlamydophila and Streptococcus pneumoniae, but also viruses like influenza.

The last age group is individuals over 40, especially the elderly over 65.

The most frequent causes are Streptococcus pneumoniae, anaerobes, and viruses.

Ok besides age, remember that in IV drug users, pneumonia is usually caused by Staphylococcus aureus and Streptococcus pneumoniae.

These also common causes of pneumonia in people with cystic fibrosis, but a very high yield pathogen associated with CF is Pseudomonas aeruginosa.

Another special group is people who are immunocompromised.

HIV+ individuals with a CD4+ lymphocyte count under 200 cells per microliter can also suffer from AIDS-related opportunistic pathogens, like the fungus Pneumocystis jirovecii.

This type of pneumonia can cause respiratory failure or pneumothorax if left untreated, and was a common cause of death in AIDS patients.

Moving on, in those who’ve acquired pneumonia after a viral infection, the most common culprit is either Streptococcus pneumoniae, Staphylococcus aureus, or Haemophilus influenzae.

And finally, in post organ transplant patients who are on immunosuppressants, pneumonia with intranuclear and cytoplasmic inclusion bodies histologically points to opportunistic infection by Cytomegalovirus.

Pneumonia can also be categorized by where it’s acquired.

The most common is community-acquired pneumonia, and it’s when a person gets sick outside of a hospital or healthcare setting. It is usually caused by Streptococcus pneumoniae.

Ok, so next is hospital-acquired pneumonia or nosocomial pneumonia, which is when a person gets pneumonia when they are already hospitalized for something else for at least 2 days.

It tends to be more serious because these individuals often have weakened immune systems and the microbes in hospitals are often resistant to the common antibiotics.

Some high yield bacteria to remember are Methicillin-resistant Staphylococcus aureus or MRSA, which is usually carried by asymptomatic hospital staff; Legionella pneumophila, which can be found in water-systems or water-based cooling systems in hospitals is also common.

Another category is ventilator-associated pneumonia, which is a subset of hospital-acquired pneumonia.

It often develops when ill individuals are intubated for more than 48 hours. Oftentimes, bacteria like Pseudomonas aeruginosa and Staph. aureus can form a biofilm on the endotracheal tube.

Individuals on a ventilator can’t cough so over time microbes move from the tube directly into the lungs and cause pneumonia.