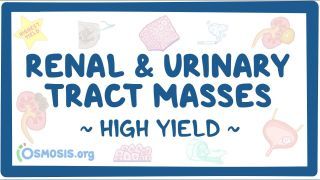 One of them is 68 years old Randy who has left flank pain and gross hematuria.

On the physical examination, there’s also a palpable mass in the left abdomen.

Randy also has a history of heavy smoking for the past 40 years.

The other person is 54 year old Uriah who came in because of painless hematuria.

A while ago, Uriah took cyclophosphamide for a condition he had called Hodgkin’s disease.

Both individuals had an ultrasound done, which showed a mass in Randy’s left kidney and a mass in Uriah’s bladder.

Let’s first talk about renal masses, which can develop in both adults and children.

These masses may be either cysts or tumor.

In turn, renal cysts can be either simple or complex, while tumors can be benign, like renal oncocytoma, or malignant, like renal cell carcinoma.

Regarding masses of the urinary tract, the main concerns are transitional cell carcinoma and squamous carcinoma of the bladder.

Let’s look at them one by one.

Simple cysts are very common and account for most of renal masses.

They are typically small and occur in adults with otherwise healthy kidneys.

On an abdominal ultrasound, they’re perfectly round and have a thin wall and are filled with fluid.

This liquid is basically the produced by the kidney.

The ultrafiltrate is the plasma without proteins that results after the filtration process, that happens in the glomeruli, specifically in Bowman’s capsule.

This makes simple cysts anechoic on ultrasound, since the fluid does not produce an echo and thus appear black.

Usually they’re asymptomatic and are discovered incidentally during an ultrasound or a CT-scan done for other reasons.

On the other hand, complex cysts are larger than simple cysts.

Additionally, on an ultrasound, they have thick, irregular walls and are multilocular- meaning they have septations within, that separate the cyst cavity into compartiments.

Sometimes, complex cysts may even have a solid component within.

Now, complex cysts are more likely to cause symptoms, like flank pain, for example.

They also have a higher chance of becoming malignant and that’s why, for your tests, remember that complex cysts require additional follow up and even surgical removal.

Let’s now talk about renal oncocytoma, which is a benign tumor that usually appears in adults.

It originates from the intercalated cells of the collecting ducts.

Macroscopically, the tumor appears as a circumscribed mass with a central scar.

Microscopically, unlike RCC, a renal oncocytoma has large eosinophilic cells without perinuclear clearing.

Individuals can present with painless hematuria, flank pain and an abdominal mass.

Most of these benign tumors are resected in order to rule out malignancies, like RCC.

Moving onto renal cell carcinoma or RCC, which is the most common renal malignancy.

It usually appears in males between the ages of 50 to 70.

Risk factors for RCC include smoking and obesity.

It’s associated with mutations that cause gene deletions on chromosome 3.

These mutations can be sporadic or inherited as a part of Von-Hippel-Lindau syndrome, which is characterized by the formation of cysts and tumors in different parts of the body, like the kidneys and pancreas.

For your tests, remember that, the most common type of RCC is a clear cell carcinoma, where the cancerous cells are polygonal and filled with lipids and carbohydrates.

They appear clear on microscopy, because the standard tissue fixation and staining techniques dissolve the lipids and glycogen, leaving clear empty spaces behind.

So, if RCC invades the left renal vein, then the venous drainage of the left testis is blocked, leading to a varicocele.

Remember for your exams that this can never happen on the right side, because the venous drainage from the right testis goes directly into the inferior vena cava.

Now that we got that covered, RCC can also invade the inferior vena cava via the renal veins and through hematogenous spread, can cause metastasis to the lungs and bones.

RCC can be asymptomatic, but it can also present with the classic triad of flank pain, hematuria and palpable masses.

That’s because if the tumor is big enough, it will compress the surrounding tissues, leading to flank pain and a palpable mass.

This compression can also damage the kidney, causing hematuria.

In more advanced stages, weight loss can also be present.

Now, RCC can also be associated with signs and symptoms of a paraneoplastic syndrome.

First, the tumor can secrete erythropoietin and this will affect the bone marrow, making it produce more red blood cells in which case there will be polycythemia.

In other cases, the tumor can also secrete a PTH-related protein, which acts just like Parathyroid hormone and cause the bones to release more calcium, leading to hypercalcemia.