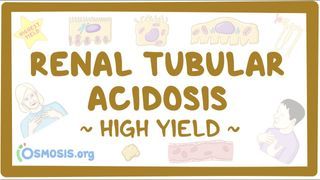 In the Emergency Department, two people came in with rapid, shallow breathing and tachycardia.

The first one is 45 year old Olga who also has systemic lupus erythematosus and the second one is 39 year old Fred.

An arterial blood gas was taken, along with electrolytes.

Results showed that Olga had low pH, low bicarbonate and pCO2 levels and her potassium level was also low.

Fred also had low pH, low bicarbonate and pCO2 levels, but his potassium level was high.

Based on the ABG results, the diagnosis of normal anion gap metabolic acidosis was made.

In order to identify the cause of their normal gap metabolic acidosis, more investigations were done and the urine anion gap showed that both individuals had a low urinary anion gap, which suggests that the cause was renal.

Like when a lot of bicarbonate is lost through the urinary tract- which happens in type II renal tubular acidosis.

Now, there’s also a type III renal tubular acidosis, where both the proximal and distal tubules are affected.

This is a pretty rare situation and the causes are not well understood, so it’s unlikely to be tested.

Okay, now, let’s review the physiology of the tubules.

The proximal tubule is affected in RTA type II.

It’s lined by brush border cells which have two surfaces:

One is the apical surface that faces the tubular lumen and is lined with microvilli, and the other is the basolateral surface, which faces the peritubular capillaries.

Now, a lot of bicarbonate is reabsorbed here.

When bicarbonate approaches the apical surface it binds to hydrogen to form carbonic acid, which will be split into water and carbon dioxide by carbonic anhydrase.

The water and carbon dioxide diffuse into the cells where carbonic anhydrase facilitates the reverse reaction and combines them to form carbonic acid, which dissociates into bicarbonate and hydrogen.

Then bicarbonate will get into the blood with the help of a sodium bicarbonate cotransporter on the basolateral surface.

Okay, so now let’s look at the distal tubule and collecting duct which are affected in type I and type IV RTA.

First, they are lined with alpha-intercalated cells which also move bicarbonate and hydrogen from the tubule into the cell with the help of carbonic anhydrase.

The alpha intercalated cells also secrete hydrogen across the apical surface and into the tubule with the help of a hydrogen ATPase and a potassium hydrogen ATPase.

This allows protons to get removed without making the urine too acidic and damaging the cells lining the tubules and the rest of the urinary tract.

The other group of cells in these regions are the principal cells.

All three of these channels are stimulated by aldosterone, and the combined effect is resorption of sodium and loss of potassium.

In type I RTA or distal renal tubular acidosis, the main issue is that alpha intercalated cells of the distal tubule and collecting duct are unable to secrete hydrogen.

This leads to a buildup of hydrogen in the blood, resulting in acidemia which will eventually lead to metabolic acidosis.

With type I RTA, there’s also increased potassium excretion to maintain electroneutrality in the renal tubules, so there will also be hypokalemia.

The underlying cause of type I RTA could be a genetic mutation in the H+ ATPase pump or the H+/K+ ATPase pump of alpha intercalated cells.

Alternatively it could be due to an acquired defect from a medication like amphotericin B, which can allow hydrogen to simply diffuse from the tubule right back into the cell.

Other causes include analgesic nephropathy, congenital anomalies of the urinary tract, and autoimmune disease, like systemic lupus erythematosus, all of which can damage the distal and collecting tubules, and decrease hydrogen secretion.

On lab tests, Type I RTA leads to a normal gap metabolic acidosis, meaning that blood pH will be low and levels of serum bicarbonate, potassium, and pCO2 be low, but the anion gap will be normal.