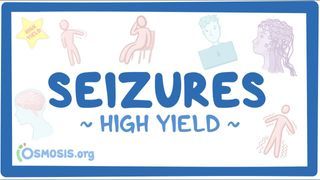 On the neurology ward, a 7-year old male, called Stefan, is brought by his mother.

His mother is worried because he has several episodes every day where he loses consciousness for a few seconds.

His teacher also complains that she often catches him daydreaming during the lesson.

Next to Stefan, there’s a 17-year old male, called Jacob, who seems sluggish and tired.

His friends brought him because he suddenly started “shaking and jerking” and he lost consciousness for about two minutes.

Her father is very upset because he witnessed an episode of twitching of her left foot that lasted a few minutes.

Megan was unconscious and has no memory of the event.

Finally, there’s a 19-year old female, called Joanna, that has had repetitive episodes of sudden and rapid jerking movements with loss of consciousness for the past few months.

They usually occur when she wakes up in the morning and especially during periods of sleep deprivation.

Okay, so all of them had a seizure episode.

A seizure is a paroxysmal motor, sensory or autonomic event that occurs due to abnormal, excessive and synchronous electrical discharges from neurons in the brain.

If it lasts more than 5 minutes, it’s called status epilepticus.

However, focal seizures can spread to both cerebral hemispheres, causing a generalized seizure.

When this happens, it’s appropriately called secondary generalization of a focal seizure.

Generalized seizures are subclassified into motor and non-motor seizures.

However, these clinical features are usually combined, so individuals commonly have a tonic-clonic seizure.

After the tonic-clonic seizure ends, individuals enter a period called the post-ictal phase, during which the individual’s consciousness is still impaired for minutes to hours, so they seem sluggish and tired or hard to wake up.

So on the exam, look for these subtle clues that indicate a post-ictal phase.

Next are myoclonic seizures.

Myoclonic seizures typically occur in the morning and are usually triggered by stress or sleep deprivation, and that’s something you also have to know for the exams!

Therefore they are characterized by sudden loss of postural muscle tone lasting 1 to 2 seconds, causing the individual to collapse to the ground out of the blue.

Alright, moving on to the other arm of generalized seizures, there are the generalized non-motor seizures.

These are called absence seizures and they are very high yield.

They are commonly found in children and adolescents.

Episodes are characterized by sudden, brief loss of consciousness for seconds to minutes without any change in the individual’s muscle tone.

So, they could be sitting in class listening to a lecture and suddenly lose consciousness without falling down.

Now, focal seizures can be motor, sensory, or autonomic, depending on the area of the cerebral cortex involved.

During an aura, individuals may exhibit subtle muscle movements called automatisms, such as chewing, lip smacking, or rapid blinking of the eyes.

Other interesting forms of aura include smelling unusual odors like kerosene, a rising sensation in abdomen, or even feelings of fear or deja vu.

Alright, now it might be difficult to know if a seizure was a generalized tonic-clonic right from the beginning, or if it was a focal seizure that secondarily generalized.

However, a history of an aura, unilateral shaking, turning of the head to one side or Todd’s paralysis is a clue it may have been a focal seizure that secondarily generalized.

Take that with a grain of salt though, because the absence of these historical features does not adequately exclude a focal seizure.

Okay, now a special subtype of seizures that occurs in young children between the ages of 6 months and 5 years are febrile seizures.

These only happen when the child develops a fever, and they can be generalized or focal.

Simple febrile seizures are usually generalized, last less than 15 minutes, and do not happen again within 24 hours.