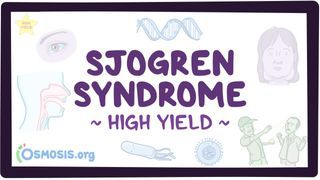 On your rounds, you see a 55-year-old female named Patricia who presents with fatigue, dry skin, and red eyes.

She mentions that she's had a recurrent sensation of sand in her eyes and dry mouth every day for the past three months.

She also mentioned that when it’s cold outside, the tips of her fingers turn white and hurt.

On examination, there are signs of tooth decay and purpura on both lower extremities.

Ok, so Patricia’s clinical picture is suggestive of Sjogren syndrome.

Alternatively, it can be secondary when it is accompanied by other autoimmune diseases like lupus, rheumatoid arthritis, and scleroderma.

Now, the exact cause of Sjogren syndrome is unknown, but both genetic and environmental factors are involved.

In Sjogren syndrome, some helper T-cells perceive nuclear components that leak out of dead or damaged cells in the body as antigens.

These T-cells become active and proliferate and then activate B-cells which start producing anti-nuclear antibodies, or ANAs, against the nuclear antigens.

A high yield fact to remember is that the two types of ANA formed in Sjogren syndrome are anti-SSA/RO and anti-SSB/LA antibodies, which are formed against ribonucleoproteins SS-A and SS-B.

Next, both T-cells and antibodies enter the circulation and reach the exocrine glands, where activated T-cells secrete cytokines to recruit even more immune cells.

The end result is a loss of secretory cells in the glands.

The resulting symptoms of Sjogren syndrome can be divided into two main categories.

First up are glandular manifestations, where involvement of the eyes or salivary glands occurs first and sometimes exclusively.

Lacrimal gland involvement results in decreased tear secretion, which leads to dryness of the eyes, blurry vision, irritation which is described as a sensation of sand in your eyes, redness and, ultimately, to keratoconjunctivitis, which is inflammation and ulceration of the cornea and conjunctiva.

Salivary gland involvement usually leads to diffuse fibrosis and painless enlargement of the gland, so remember that if you see nodules, think neoplasm instead.

The diffuse damage to the glands leads to xerostomia, or dry mouth, due to decreased saliva secretion.

The lack of saliva causes mucosal atrophy and fissuring of the tongue.

It can also lead to decreased sensation of taste, problem swallowing and tooth decay.

If it involves the parotid glands, fibrosis can lead to bilateral parotid enlargement, which can compress on the nearby nerves, causing pain.

In the nose and airways, Sjogren syndrome causes dryness that leads to ulceration and bleeding, and if this affects the larynx, it can lead to difficulty speaking.

And finally, some people can experience dryness of the skin and vagina, which might cause dyspareunia or painful intercourse.

Extraglandular manifestations occur when the syndrome affects organs beyond the exocrine glands, especially if it overlaps with another autoimmune disorder.

Joint involvement is typically manifested as arthralgia, or joint pain, with or without inflammatory arthritis, and it actually occurs in 50% of people with Sjogren syndrome.

There can also be vascular conditions like purpura, which occurs due to bleeding within the skin secondary to vasculitis, or Raynaud’s phenomenon, which is where arterial spasms reduce blood flow to the fingers for a few minutes at a time.

The fingers turn white and then blue, often with numbness or pain, and then as blood flow returns, the fingers turn red. Lung problems include a chronic cough, as well as interstitial lung disease, which results in a restrictive pattern on pulmonary function tests.

Renal involvement can cause interstitial nephritis and defects in tubular function, causing creatinine levels to rise.

The condition can be associated with autoimmune thyroiditis, hypergammaglobulinemia, monoclonal gammopathies, and cryoglobulinemia.

Finally, a really high-yield concept to know is that overtime, Sjogren syndrome can lead to lymphomas.

One type is a non-Hodgkin lymphoma called mucosa-associated lymphoid tissue, or MALT, lymphoma, which is typically associated with chronic inflammation.

MALT lymphoma can present as nodular parotid enlargement instead of the diffuse enlargement normally seen in Sjogren syndrome, so keep that in mind!.

Since virtually any organ or gland can be affected, diagnosis is based on symptoms relating to salivary gland, mouth, and eye involvement,