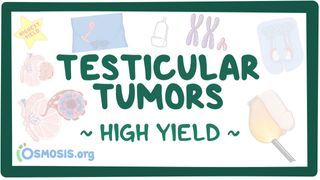 Another high-yield thing to know is that this is the testicular analogue of ovarian dysgerminoma. Now, lab tests may show increased PALP levels, however, remember that AFP levels are always normal. hCG is usually also normal, but in rare cases, it might be increased.

What’s high-yield here is that these are the most common testicular tumor in children.

So, if a test question is about a child, particularly younger than 3 years old, with a firm, painless testicular mass, think of yolk sac tumor at the top of your differentials.

On gross examination, this type of tumor is typically yellow and mucinous.

A key thing to keep in mind is that, under the microscope they form glomeruloid structures or Schiller-Duval bodies, which are rings of malignant cells around the central blood vessel.