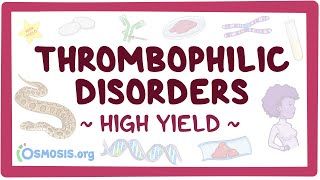 At the emergency department, a 30 year old Caucasian female named Celia came in with pain and swelling in her right calf.

Her medical history is otherwise unremarkable.

Next to Celia, there’s a 60 year old male called Nicholas who developed a painful lesion on his arm after starting anticoagulation therapy with warfarin.

She was diagnosed with systemic lupus erythematosus about a year ago.

She has no family history of thrombophilic disorder.

All of them suffer from thrombophilic disorders, or thrombosis syndromes, which are inherited or acquired diseases that predispose an individual to clot formation.

But before going into the individual thrombophilic disorders, let’s go through the normal coagulation system.

The coagulation pathway is divided into an extrinsic and an intrinsic pathway, which join into a common pathway that ultimately result in the formation of fibrin clots.

The extrinsic pathway starts when trauma damages a blood vessel, and exposes the cells under the endothelial layer, which have tissue factor in their membrane.

Activated factor VII binds to tissue factor, forming a complex that then binds to and activates factor X.

Finally, factor IX forms a complex with factor VIII, and this complex binds to and activates factor X.

In the common pathway.

Thrombin then converts fibrinogen, or factor I, into fibrin, which cross-links to form a fibrin mesh that stabilizes the platelet plug.

Alright, but in order to prevent over-coagulation, the liver makes proteins C and S, which are vitamin K-dependent anticoagulant factors.

In the presence of protein S as a cofactor, protein C acts by enzymatically inactivating factors V and VIII.

Alright, now let’s take a closer look at the different thrombophilic disorders, starting with the inherited ones.

Factor V Leiden is the most common hypercoagulable disorder in people of caucasian descent, and was named after the town Leiden in Holland, where the disease was first described.

It results from an autosomal dominant point mutation in the gene encoding for factor V, causing it to become resistant to inactivation by protein C. And when factor V can’t get inactivated, there’s increased blood clot formation.

Next up, is the second most common inherited thrombophilia, the autosomal dominant prothrombin G20210A mutation.

This mutation involves the substitution of adenine for guanine at position 20210 in the noncoding region of the prothrombin gene, causing an increase in the circulating levels of prothrombin.

Okay, now onto protein C and S deficiency that results in an inability to inactivate factors V and VIII.

There are two types and both are inherited in an autosomal dominant manner.

If a person suffers from type I disease, they don’t make enough protein C or protein S, so they have a quantitative defect.

In type II disease, there’s enough of protein C and S, but they don't function properly, which means the proteins have a qualitative defect.

There are also acquired forms of deficiency, which include impaired production due to liver disease, anticoagulation therapy with warfarin, which is a vitamin K antagonist, or when protein C and S get lost in the urine due to nephrotic syndrome.

Proteins C and S can also become deficient in disorders like disseminated intravascular coagulopathy, or DIC, where widespread clotting leads to depletion of both coagulation and anticoagulation factors.

Next up is antithrombin III deficiency that results in inability to inhibit factor X and factor II and can be acquired, or inherited.

Acquired deficiencies are more common, and result from impaired production of antithrombin III due to liver disease, or protein losses such as nephrotic syndrome, or DIC.

Antithrombin III deficiency can also be inherited via an autosomal dominant inheritance pattern and is further divided into two types.

Alright, onto the acquired causes of thrombophilia, the most important of which is antiphospholipid antibody syndrome.

In antiphospholipid antibody syndrome, individuals produce antibodies, which attack the phospholipids in the cell membrane of their own cells, or attack proteins that are bound to those phospholipids.

So it’s an autoimmune disease, and it can occur as a primary disease, or in the setting of an underlying disease, like systemic lupus erythematosus.

The most common presentation of all thrombophilic disorders is venous thromboembolism.

This includes deep vein thrombosis of the lower or upper limbs which can present with pain and swelling in the affected limb.

Now, parts of the clot can break off and travel to other organs, like the lungs, the brain, the liver and the kidneys, cutting off blood flow to those organs and causing organ failure.

Now, each of these thrombophilic disorders also have specific symptoms that can help you identify them.

Αlso, they are both associated with pregnancy loss due to blood clotting in placental vessels, leading to placental infarction.

The risk of recurrent venous thromboembolism is only mildly increased but can increase when there’s an additional risk factor, like surgery, pregnancy, prolonged immobility, or oral contraceptive use.

Now, most people with protein C or S deficiency also present with venous thromboembolism, but a more serious condition that could result from severe protein C or S deficiency in homozygotes is called neonatal purpura fulminans, which is a condition where a newborn suffers massive arterial and venous thromboembolisms with hemorrhagic skin necrosis.

Now, a high yield topic that is frequently tested on the exams is warfarin induced skin necrosis.

This is a condition where tiny thrombi form in the blood vessels of the skin while a person is on warfarin therapy.

But the thing is, protein C and S have the shortest half-life out of all of these factors.

As a result, there’s a transient period of time after starting warfarin in which the patient doesn’t have much protein C and S but still has adequate levels of factors II, VII, IX, and X. So during this transient period a patient is slightly hypercoagulable!

Normally, this transient period is not significant enough to cause any problems.

But in a person with protein C or S deficiency, the hypercoagulability can cause them to develop tiny clots in cutaneous blood vessels, which leads to warfarin-induced skin necrosis.

Μοving onto antithrombin III deficiency, the major consequences is increased risk of venous or arterial thrombosis and heparin insensitivity.