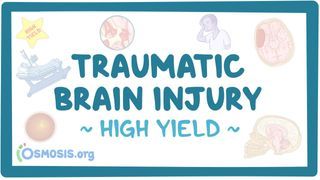 At the emergency department, 65-year-old Christian came in complaining of headaches, vision problems, and memory loss.

These symptoms have gradually progressed over the past couple of weeks.

On examination, there’s slurred speech, and his gait is unsteady.

He has a history of chronic alcohol abuse. Head CT shows a “crescent-shaped” hyperdense mass that crosses the suture lines.

Later that day, 33-year-old Max is brought in after a fight.

They reported being knocked unconscious, but regained consciousness after an unknown period of time.

Head CT is ordered and shows a “lens-shaped” hyperdense mass that doesn’t cross the suture lines.

Max was very agitated and said they felt fine.

They then left the hospital against medical advice.

Okay, so Christian has and Max had some form of traumatic brain injury.

When an external force damages the head resulting in temporary or permanent brain dysfunction, we call it a traumatic brain injury, or TBI.

TBIs can cause primary brain injuries, which are a direct result of the external force and can be classified as extra-axial and intra-axial injuries.

Extra-axial injuries are within the skull but don’t involve the brain parenchyma.

The most high yield ones are epidural and subdural hematomas, as well as a subarachnoid hemorrhage.

Intra-axial injuries - on the other hand - do involve the brain parenchyma, and the most high yield one for your exams is diffuse axonal injury.

Now, sometimes, primary injuries can lead to secondary injuries, and for the exams, the most important is brain herniation.

Okay, now let’s take a closer at these different types of traumatic brain injury, starting with the extra-axial injuries.

This region is called pterion, and it’s the thinnest part of the lateral wall of the skull.

For the test, remember that a fracture at the pterion can tear open the middle meningeal artery (a branch of the maxillary artery) causing profuse bleeding.

During this time the individual regains consciousness and feels fine, but a lucid interval isn’t always seen.

Symptoms are due to the build of blood trapped between the dura mater and skull, which increases intracranial pressure.

This means the intracranial pressure can increase rapidly.

There can also be evidence of scalp hematoma due to the head trauma.

In addition to the bleeding, there can be surrounding cerebral edema, and if the edema is significant, it can cause a shift of the midline to the contralateral side.

This signifies an impending brain herniation, most commonly a transtentorial herniation.

Epidural hematomas are an emergency, and neurosurgical intervention is often necessary.

All right, moving onto subdural hematomas.

So even minor head trauma, like walking into a door, can lead to a subdural hematoma in these individuals.

Because of these factors, subdural hematomas tend to be more insidious.

And the density on the brain CT helps determine the age of the hematoma.

Also, a midline shift can also be seen on CT.

The morbidity and mortality of subdural hematomas are high because they can develop more insidiously and are therefore harder to detect in the early stages.

Similar to epidural hematomas, the mainstay of treatment is prompt surgical hematoma evacuation.

Sometimes, stable individuals with acute small hematomas can be managed nonoperatively, as the hematoma is reabsorbed naturally.

Aneurysms can burst open when there’s an increase in intracranial pressure.

The most common aneurysms in the brain are saccular cerebral aneurysms, also called berry aneurysms.

They typically arise in the anterior half of the circle of Willis at bifurcations.

Bifurcations are junctions between arteries, and the most common junction where saccular aneurysms take place is between the anterior communicating artery and the anterior cerebral artery.

Brain imaging shows blood in the ventricular cisterns, interhemispheric fissures, and within the sulci.

The more blood that’s seen, the worse the outcome.

Now, in cases of a spontaneous subarachnoid hemorrhage, if the brain imaging is negative, then the diagnosis can be made with a lumbar puncture and cerebrospinal fluid analysis.

Initial management of a subarachnoid hemorrhage is supportive.

But rebleeding is very frequent, so the only effective treatment is prompt surgery like aneurysm repair.

A complication that can occur about 2 days to 2 weeks after a subarachnoid hemorrhage is post-traumatic vasospasm of the subarachnoid vessels, which can cause cerebral ischemia.