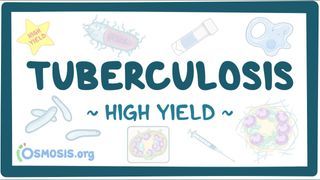 While doing your rounds, you meet Josh, an HIV-positive 25-year-old man who presents with a 2-month history of non-productive cough.

He denies dyspnea or hemoptysis.

A PPD intradermal test was performed and it was negative.

His chest X-ray showed a peri-hilar lesion with central necrosis and calcification as well as lymphadenopathy of nearby nodes.

Now, this person seems to suffer from tuberculosis, or TB for short.

But first, a bit of microbiology.

One piece of high-yield information is that they’ve got an unusually waxy cell wall made of mycolic acid , which is composed of long chains of branched lipids.

This makes them “acid-fast” so when Ziehl-Neelsen stain is applied, the dye will not be washed away by acids, giving the bacteria a bright red color.

The wall also makes the bacteria incredibly hardy, and allows them to resist weak disinfectants, antibiotics, and allow them to survive on dry surfaces for months at a time.

Before we start, you need to know that there are a few high-yield risk factors for TB.

These include immunosuppression, like in people with HIV; iatrogenic immunosuppression, like in people who undergo treatment with corticosteroids; systemic diseases such as COPD, diabetes, and end-stage renal disease; extremes of age; substance abuse; and populations with an increased risk of exposure, like the prison populations, homeless people, those born in an endemic country, and health care workers.

Okay, so let’s start by talking about primary tuberculosis.

This is where TB bacteria are transmitted when a person breathes in contaminated aerosolized droplets coughed up by someone who has TB.

This is not normally a problem, as we have plenty of defense mechanisms against the microorganisms we inhale.

They are often trapped in the mucus secretions in the upper respiratory tract and coughed up.

TB that make it to the alveoli are phagocytized by macrophages, where they are trapped inside phagosomes, that later fuse with a hydrolytic enzyme-containing lysosome that normally breaks down harmful microbes.

However, TB bacteria can survive this process due to sulfatide, a surface protein that inhibits the phagosome-lysosome fusion.

So, what you need to know is that this allows the mycobacterium to survive, proliferate inside the macrophage, and cause a localized infection within one week of exposure.

However, most people at this stage are actually asymptomatic and unaware they are infected because the immune system can contain the bacteria quite efficiently.

However, around 3 weeks after initial infection, a surface glycolipid called TB cord factor triggers an immune response where numerous cytokines are released, attracting more macrophages and helper T-cells to the area.

They try to quarantine the TB bacteria by forming granulomas.

Remember that this granuloma formation is a cell-mediated type IV hypersensitivity reaction where helper T-cells presented with TB antigen activate, and release cytokines that attract more macrophages to the area.

These macrophages, dead tissue, and bacteria form the center of the granuloma, while helper T-cells and multinucleated giant cells, which are formed by the fusion of several macrophages, are found on the periphery.

Their multiple nuclei are arranged peripherally, resembling the shape of a horseshoe.

Their cytoplasm contains Schaumann bodies which are made of calcium and protein deposits, and abnormal lipid structures called asteroid bodies.

This is because the tissue in the middle of the granuloma dies as a result of a process called caseous necrosis, which means “cheese-like” necrosis, since the dead tissue is soft, white, and resembles cheese.

These areas are known as a “Ghon focus”.

Now, TB can also spread to nearby hilar lymph nodes, either carried over by immune cells through the lymphatic system or by direct invasion from the Ghon focus.

Together, the Ghon focus and the affected lymph node, form the “Ghon complex,” which is characteristic of primary tuberculosis.

A high yield fact is that Ghon complexes are usually subpleural and occur in the mid and lower lobes of the lungs.

From here on, there are a few possible outcomes.

In children and immune compromised individuals, primary tuberculosis can not be contained by granulomas so they spread throughout the lungs, causing further damage.

This is called progressive primary tuberculosis.

In most cases however, the tissue that’s encapsulated by the granuloma undergoes fibrosis, and often calcification, producing scar tissue that can be seen on x-ray.

A calcified ghon complex is called a “Ranke complex”.

In some cases, the mycobacteria is killed off by the immune system and the complex heals, leaving just a small scar behind, and that’s the end of that.

However, if the TB bacteria in the Ghon complex isn’t eliminated, we can get secondary tuberculosis.

Even though the bacteria are walled off, they remain viable but latent.

If and when a person’s immune system becomes compromised, the Ghon complex can become reactivated, and the infection can spread throughout the lung parenchyma.

Another high-yield fact is that the infection usually spreads to either one or both upper lobes of the lung, mostly because oxygenation is greatest in these areas, and TB being an aerobe, prefers areas of greater oxygenation.

Now, since individuals were previously exposed to the bacteria, the immune system’s memory T cells quickly release cytokines to try and control the new outbreak, which forms more areas of caseous necrosis and more lung parenchyma is destroyed.

If the damage is severe, it could cause fibrocaseous cavities.

Because the cavities are large, they can allow the bacteria to disseminate, or spread, through airways and lymphatic channels to other parts of the lungs, causing bronchopneumonia.

Another way the infection in both secondary and progressive primary tuberculosis can spread is via the vascular system, causing bacteremia.

This way, TB can infect almost every other tissue in the body, leading to systemic miliary TB.

When TB spreads to other tissues, it causes complications related to the organ affected.

Kidneys are commonly affected, resulting in sterile pyuria, or high levels of white blood cells in the urine.

It might also spread to the meninges of the brain, causing meningitis, the lumbar vertebrae, causing Pott disease, the adrenal glands causing Addison’s disease, the liver causing hepatitis, and the cervical lymph nodes causing lymphadenitis in the neck, also known as scrofula.

It can also spread to the joints, where it causes mycobacterial arthritis, and long bones, where it leads to osteomyelitis.

Now, the symptoms of pulmonary tuberculosis are varied, depending on the phase of the disease and any comorbidities.

Primary tuberculosis might be completely asymptomatic, or it might present with classic findings, including fever, night sweats, weight loss, non-productive and productive cough, and hemoptysis, usually secondary to the infection eroding the pulmonary blood vessels.