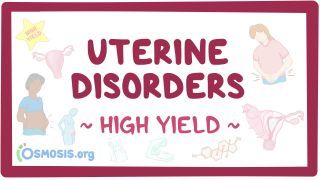 Treatment for endometrial hyperplasia includes eliminating the underlying cause of excess estrogen, such as weight loss in cases of obesity, stopping unopposed estrogen therapy and correcting the problem of anovulation in cases of polycystic ovarian syndrome.

Also, progesterone containing medications can be used, which help in counteracting the proliferative effect of estrogen.

For endometrial cancer, treatment is based on surgery.

This typically means the removal of the uterus, both ovaries, and both fallopian tubes, also called a hysterectomy with bilateral salpingo-oophorectomy, combined with the removal of pelvic and para-aortic lymph nodes.

In some cases where the cancer is more advanced or is likely to spread, radiation therapy and/or chemotherapy can be also done after surgery.

Okay, next, endometrial polyps are benign growths of the endometrial glands and stroma that protrude into the uterine cavity.

What’s especially high-yield is that they are more frequent in females who are on tamoxifen therapy.

So, in your test question, the typical individual with endometrial polyp will also have a history of breast cancer treatment.

Now, endometrial polyps may be asymptomatic or present with abnormal uterine bleeding.