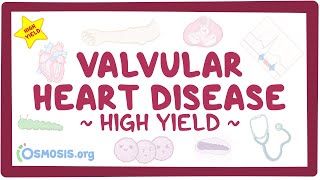 On the Cardiology ward, there are two individuals.

One of them is 75 year old Antonia, who’s complaining of chest pain and says she hardly catches her breath after walking.

On clinical examination, her pulse feels pretty weak and on auscultation, a systolic murmur is heard.

The murmur was louder just after S1 and got quieter and quieter by the end of S2.

The other individual is 38 year old Mark who has a history of rheumatic fever and is complaining of not being able to swallow properly.

On clinical examination, his voice sounds raspy and on auscultation, a snap is heard after S2 along with a diastolic rumble.

Based on auscultation, both individuals were sent for echocardiography.

Okay, so based on auscultation and symptoms, both individuals seem to have valvular heart disease.

Rheumatic fever can develop after streptococcal infection like strep throat, which is caused by Streptococcus pyogenes.

This particular group of streptococcus has an antigen that lumps it into a group called “group A”, and they also produce an enzyme called streptolysin, which causes hemolysis.

Some of these strep bacteria have a protein on their cell wall called “M protein”, and this particular protein is highly antigenic, meaning that the immune system sees it and recognizes it as a foreign molecule and produces antibodies against it.

Now, this becomes a problem when these antigens cause a phenomenon called molecular mimicry.

M proteins can be structurally similar to human proteins, which means the antibodies that target them will also target our own tissue.

In this case, they are similar to proteins found in the myocardium and heart valves.

This is also an example of what’s called a type 2 hypersensitivity reaction.

Alright, so not everyone that gets strep throat gets rheumatic fever, and it’s actually only a small minority that get it.

However, the individuals that do get rheumatic fever from strep infections will have a variety of clinical findings.

The most common is migratory polyarthritis of the joints, where multiple large joints become inflamed, swollen and painful, then the inflammation resolves and spreads to other joints.

Secondly, some patients have carditis.

The inflammation can affect the endo, myo, and pericardium.

Since the endocardium includes the valves, they too are affected.

A high yield fact to remember is that the mitral valve is most commonly affected, although the aortic and tricuspid valve can also be affected.

In the acute phase of the illness, mitral regurgitation is most common.

Later on, fibrosis around the valve causes its leaflets to fuse together, giving it a fish-mouth-like appearance.

This fusion narrows the valve opening, and so we get mitral stenosis.

Now, although not a part of the Jones criteria, a high yield fact is that on histology, there will be Aschoff bodies in the heart.

These are granulomas with giant cells consisting of areas of fibrinoid necrosis and lymphocytic infiltration.

Within Aschoff bodies, there are characteristic Anitschkow cells which are enlarged macrophages that have a characteristic caterpillar-looking nucleus.

Now for the rest of the Jones criteria, the hypersensitivity reaction in rheumatic fever can affect the skin.

So the next criteria is subcutaneous nodules, which are these firm lumps under the skin made up of collagen.

The fourth is erythema marginatum, a reddish rash that shows up as rings on the arms or trunk.

And finally, there’s Sydenham’s chorea, which is a set of rapid movements of the face and the arms, caused by an autoimmune reaction against the basal ganglia of the brain.

Treatment and prophylaxis of rheumatic fever is done using penicillin.

They can be divided into stenosis, where there’s narrowing of the valvular orifice that prevents adequate outflow of blood, and insufficiency or regurgitation, where the valvular leaflets fail to close correctly and are unable to prevent backflow of blood.

In order to make things easier to remember, we’ll classify valvular disease based on what type of murmurs you hear on auscultation.

So first, there are systolic murmurs, which you can hear right after S1 and these happen with aortic stenosis, mitral and tricuspid valve regurgitation.

Then there are diastolic murmurs, which come right after S2 and these happen with aortic regurgitation and mitral stenosis.

Let’s start with systolic murmurs and look at aortic stenosis.

The aortic valve is typically made up of three leaflets: the right, left, and posterior leaflet and it opens during systole to allow blood to be ejected to the body.

During diastole, it closes to allow the heart to fill with blood and get ready for the next systole.

Aortic stenosis is when the aortic valve doesn’t open all the way and it gets harder to pump blood into the aorta.

Aortic stenosis is usually caused by chronic mechanical stress that damages endothelial cells around the valves, causing fibrosis and calcification, which hardens the valve and makes it more difficult to open completely.

This type usually shows up in late adulthood, so for your exams, remember that this is more common in individuals over 60 years old.

Now if there’s aortic stenosis in a younger individual, the cause could be due to a bicuspid valve.

These abnormal valves are more at risk of fibrosis and calcification since the mechanical stress is now being split by just two leaflets.

With aortic stenosis, since blood has to flow through a narrow aortic valve, there’s turbulence which creates noise, or a murmur.

This initially gets louder as more blood flows past the opening and then quieter as the amount of blood flowing subsides.

This is called a crescendo-decrescendo murmur and you can hear this right after S1.

This sound is best heard in the aortic area and typically radiates in the carotids.

The intensity of the murmur increases as the pressure gradient between the left ventricle and the aorta increases.

So, the narrower the stenosis, the louder the murmur.

Now, normally, S2 has two components: the aortic component and the pulmonary component since the valves don’t close at the same time.

Typically, the aortic valve closes first and then the pulmonary valve.

But with aortic stenosis, the aortic valve closes later than expected and so it may close at the same time with the pulmonary valve, in which case you’ll hear a soft S2.

Another important clue that will likely show up on your exam is the ejection click,

Since the valve fuses together or hardens, it doesn’t open as easily.

And so as the left ventricle contracts, it creates this high pressure that eventually pushes on the valve until it finally snaps open, causing a clicking sound.

In aortic stenosis, the pulse is described as being “parvus and tardus”.

That’s because the valve doesn’t fully open so there’s less blood flow and the pulse is weak, or “parvus”, and there’s a delay in the opening of the valve that occurs a bit later than expected, so, the pulse is also late, or “tardus”.

Even though the ventricle tries to pump out more blood, the heart still might struggle to get enough blood through the narrowed opening and then to the rest of the body.

Individuals might not initially experience symptoms at rest, and problems only occur during exercise or exertion because there’s an increase in the demand for oxygen.

So, during exercise, they can also experience dyspnea.

The next systolic murmur is caused by mitral regurgitation.

The mitral valve has two leaflets, the anterior and posterior leaflet, and together they separate the left atrium from the left ventricle.

During systole, the valve closes, which means blood has just one option, to be ejected out through the aortic valve and into circulation.

Mitral regurgitation is when the mitral valve doesn’t shut all the way, therefore blood can leak back into the left atrium.

The leading cause of mitral valve regurgitation in the United States, and the most common of all valvular conditions, is mitral valve prolapse.

Normally, when the left ventricle contracts during systole, a ton of pressure is generated to pump blood out through the aortic valve.

This also means a lot of pressure pushes on that closed mitral valve.

Normally the papillary muscles and connective tissue called chordae tendineae keep the valve from prolapsing or falling back into the atrium.

However, sometimes there’s myxomatous degeneration where connective tissue of the leaflets and surrounding tissue are weakened.

Why this happens isn’t well understood, but it is sometimes associated with connective tissue disorders like Marfan syndrome and Ehlers-Danlos syndrome.

Mitral valve prolapse can also be caused by rheumatic fever or by chordae rupture during trauma.