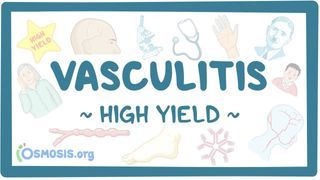 Novakova is a 60 year old woman from Czech Republic who’s been having a headache by the right temple, progressive jaw pain during chewing, and shoulder and hip stiffness, particularly in the morning.

Her ESR levels are elevated, and she is beginning to develop vision loss in the right eye.

The other person is Hikaru, a cute 3-year-old Japanese boy brought by his mother.

He has a red, swollen tongue, unilateral neck swelling, a desquamating rash, and a fever for the past 6 days.

An ECG reveals elevation of the ST segment, and an echocardiogram shows evidence of a coronary artery aneurysm.

At first glance, you’d think Novakova and Hikaru symptoms have nothing in common. But the fact is, they both have different forms of vasculitis.

The majority of vasculitides are caused by some form of immune-mediated damage.

Some are type III hypersensitivities caused by immune complexes that deposited in vessels and cause damage.

They could also be triggered by autoantibodies, such as anti-neutrophil cytoplasmic antibodies, or ANCA.

Lastly, they might be caused by cell-mediated immunity due to monocytes, macrophages or lymphocytes.

Whatever the cause, immune cells cause inflammation, which damages the endothelial wall, exposing the underlying collagen.

This results in thrombosis and could lead to ischemia of the organs supplied by the affected vessels.

Also, inflammation weakens the structural integrity of the blood vessel wall, leading to aneurysms. In addition, inflammation can spread to the supplied organ itself, causing tissue damage.

Because vasculitides are systemic inflammatory disorders, non-specific symptoms like fever, arthritis, myalgia, weight loss, and night sweats might be present.

The symptoms specific to each disease depends on which blood vessels are affected, and we can classify vasculitides into large, medium, and small-vessel vasculitis.

Age is the greatest risk factor, and it typically affects people older than 50 years.

It's also more common in females of Northern European descent.

Giant cell arteritis affects the branches of the carotid artery like the temporal artery.

For your exams, remember the person with this disorder often complains of having an unilateral headache located in the temporal area.

They might also have fatigue or pain during chewing, or jaw claudication, which is caused by ischemia of the masseter muscle.

Interestingly, you can sometimes see a prominent and tender superficial temporal artery on examination, and individuals will complain of pain when brushing their hair.

About half of the people with giant cell arteritis have polymyalgia rheumatica, a chronic inflammatory disease characterized by pain and stiffness in the muscles of hips and shoulders, and is associated with fever and weight loss.

Laboratory testing can reveal an elevated erythrocyte sedimentation rate, or ESR, which is not specific.

But if it’s normal, then you should probably think of another diagnosis.

The most high yield complication you need to remember for the test is vision loss, which happens when there’s blockage of the opthalmic artery, the first branch of the internal carotid artery.

Because of this, although the diagnosis is made with a temporal artery biopsy, giant cell arteritis is always treated first with high-dose corticosteroids to prevent irreversible blindness.

The biopsy of the affected artery typically shows granulomatous inflammation featuring monocytes that have joined forces together to make large, multinucleated cells called giant cells, which is where we get the name.

In addition, intimal thickening and fragmentation of the internal elastic lamina of the blood vessels are seen. However, because giant cell arteritis affects intermittent segments of the vessel, the can appear normal.

Next, we have Takayasu arteritis.

This large-vessel vasculitis usually affects females less than 40 years, especially those of Asian descent, and this is high yield.

Branches of the aortic arch like the subclavian artery are typically involved.

Therefore, individuals characteristically have weak upper extremity pulses on one side, which gives it the name “pulseless disease”.

This can also present as a blood pressure discrepancy between the two arms that’s greater than 10 millimeters of mercury.

On auscultation, a carotid bruit is often heard.

Visual loss and even strokes are also possible complications.

Histologically, Takayasu arteritis looks exactly like giant cell arteritis, and the treatment is the same with corticosteroids.

Because of the similarities, the best way to differentiate giant cell arteritis from Takayasu is to look at the person’s age.

Polyarteritis nodosa is a necrotizing vasculitis that typically affects middle-aged men, and can involve the renal, coronary, and mesenteric arteries.

A variety of skin manifestations can also develop, including livedo reticularis, a purplish web-like skin rash, or palpable purpura. It can also cause ischemia to multiple peripheral nerves, which is called mononeuritis multiplex.

For your tests, it’s important to remember that 30 percent of individuals are positive for the hepatitis B surface antigen, and it’s thought that the immune complexes that develop in response to hepatitis B are responsible for the vessel damage.

A portion of individuals are ANCA positive in polyarteritis nodosa.

Although not really that helpful diagnostically, just be aware of it so you won’t confuse it with the ANCA-positive small vessel vasculitides.

Histologically, a high yield thing to look for in polyarteritis nodosa shows transmural inflammation and fibrinoid necrosis of the arterial wall, which means it involves all layers.

But it doesn’t affect the whole length of the blood vessel, rather it’s segmental.

Because the entire vessel wall is involved, small microaneurysms develop along the length of the wall, looking like beads or nodes, which gives it its name.

Alright, next up is Kawasaki disease.

It usually occurs in children less than 4 years old and of Asian descent, especially in Japan.

To remember the symptoms, think of a Kawasaki motorcycle that is unfortunately about to “CRASH and burn”.

So for “C”, we have Conjunctival redness, which is usually bilateral and non-exudative, “R” is for rash, which typically progresses from being a polymorphous maculopapular rash to desquamation, or peeling of the skin.

“A” is for adenopathy, which refers to enlargement of the cervical lymph nodes, usually more than 1.5 centimeters.

Next is “S” for strawberry tongue due to glossitis, as well as other oral mucosa changes like lip cracking.

“H” is for hand and foot changes, including erythema, edema and desquamation.

Finally, the burn refers to a fever that lasts more than 5 days.

The major concern in Kawasaki disease is the development of coronary artery aneurysms, which can rupture or predispose to thrombosis, causing an acute myocardial infarction.

It’s important to remember that although aspirin is usually avoided in young children to prevent Reye syndrome, Kawasaki disease is an exception to the rule, as the anti-thrombotic benefits of aspirin outweigh the risk of Reye syndrome.

Buerger disease, or thromboangiitis obliterans typically affects males less than 40 years of age, and is particularly common in Ashkenazi Jews, and people from Israel, Japan and India.

Remember that the high yield risk factor is heavy smoking, which is the greatest risk factor.

Buerger disease commonly affects the tibial and radial arteries, so individuals experience intermittent claudication and pain in the forefoot, ischemic ulcers, or even loss of their digits.

Another common presentation is Raynaud phenomenon, which is changes in the color of the fingers and toes when exposed to the cold.

However, this is non-specific, and can also be present in other diseases like scleroderma and lupus.