An 11-year-old girl is brought to the emergency room after sudden weakness in her right arm and leg and slurred speech. She has complained of intermittent chest pain during gym class and visual disturbances for the past 2 months. Her parent states that the patient’s performance in school has been poor recently. The family immigrated from Singapore 2 years ago. Her birth and development were unremarkable. Weight at the 50th percentile for her age, while height is at the 85th percentile. Temperature is 37.0°C (98.6°F), pulse is 94/min, respirations are 18/min, and blood pressure is 105/65 mmHg. Physical examination reveals kyphosis and pectus excavatum. Ophthalmic examination reveals bilateral lens luxations. Neurological examination reveals 2/5 power in her right upper and lower limb and positive Babinski sign on the right side. An inborn error of metabolism is suspected as the cause of this patient’s symptoms. Which of the following enzymes is most likely deficient in this patient? 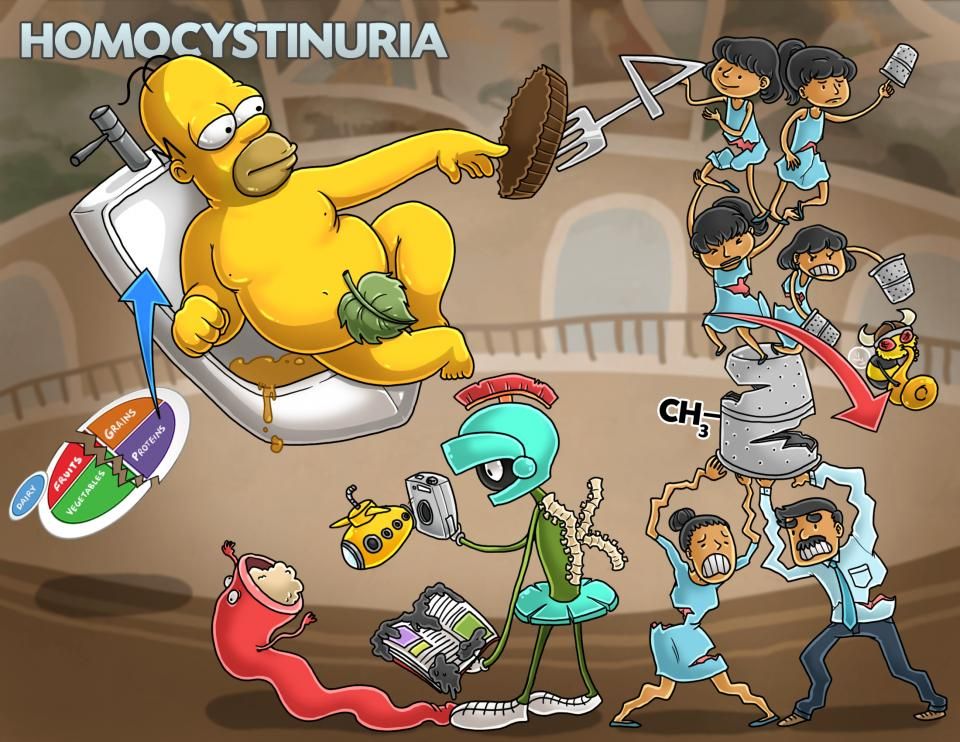 In homocystinuria, “homocysteine” is a metabolite of the amino acid methionine, and “uria” means, a substance present in urine.

So people with homocystinuria have large amounts of homocysteine in their urine, as well as other problems in the connective tissue, muscles, brain, heart, and blood vessels.

There are 20 amino acids used in the human body and they all contain a carboxyl (-COOH) group and an amine (-NH2) group.

Methionine is one of the essential amino acids, meaning our bodies can't create it, but they must be acquired through food that’s rich in protein like meat, eggs, dairy, avocados, beans, etc.

The amino acids are then absorbed by the small intestine into the bloodstream, and then travel to the cells of the body, where they are used for protein synthesis.

Since the body can’t store these amino acids, any excess amino acids are converted into glucose or ketones and used for energy.

First, methionine is converted into the amino acid homocysteine through multiple steps.

Next, the enzyme cystathionine beta- synthase, which requires vitamin B6 as a substrate, combines homocysteine and serine to create cystathionine.

Any homocysteine that does not undergo this process can be converted back into methionine by methionine synthase, which requires vitamin B12, or cobalamin, and folate as substrates.

There are two types of homocystinuria: familial and acquired.

Now, when there’s a problem with cystathionine beta- synthase, homocysteine cannot be combined with serine, so less cysteine is produced, and homocysteine builds up in the body.

If methionine synthase is defective, homocysteine can be converted into cysteine, but it can’t be converted back into methionine, which also leads to its accumulation.

Acquired homocystinuria happens later in life and is often caused by poor diet, where there are deficiencies in vitamin B6, B12, or folate.

B12 and folate deficiency decreases the activity of methionine synthase, while B6 deficiency does the same to cystathionine beta-synthase, both leading to the build up of homocysteine in the body.

Whatever the cause, when homocysteine builds up in the body, some of it is excreted in the urine leading to homocystinuria.

These attract immune cells like leukocytes to the area and cause inflammation, which leads to atherosclerosis, or plaque build up inside the arteries.

This narrows the arteries and could lead to ischemia of the tissue supplied by these arteries.

Furthermore, homocysteine also binds to platelets and cause them to stick to one another to make blood clots.

In the bones, homocysteine binds to fibrillin-1 proteins that normally provide structural support.