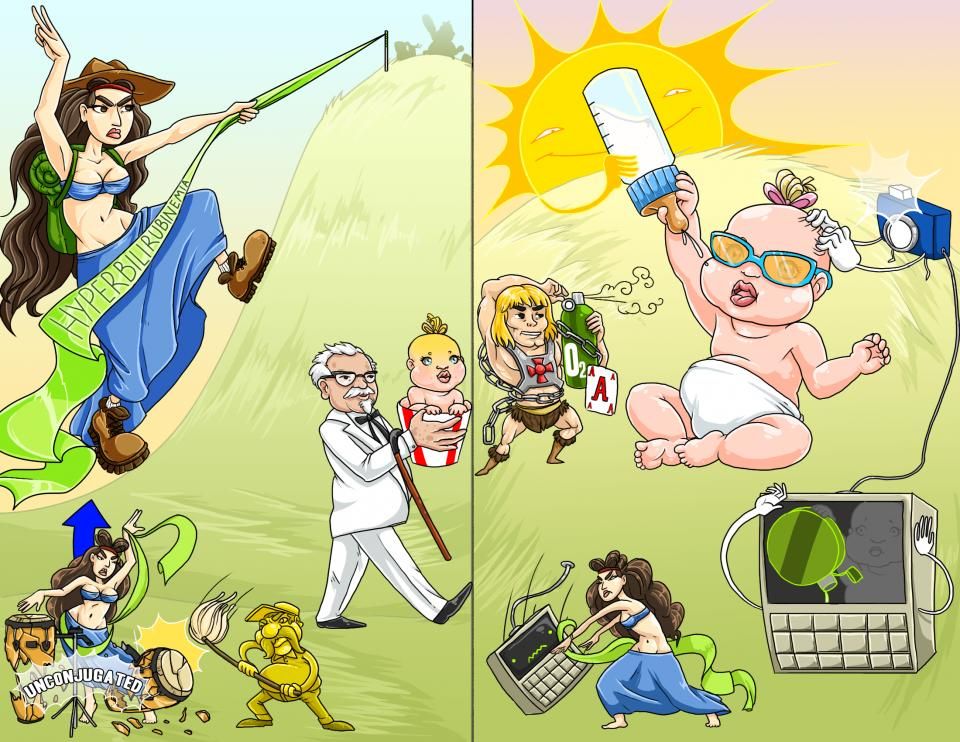 Charlotte Simpson is a 4-day-old female born by spontaneous vaginal delivery at 36 weeks of gestation, weighing 6 pounds, 11 ounces, or 3034g.

At the time of discharge, Mrs. Simpson, G1P1, was breastfeeding well and Charlotte had no evidence of jaundice.

Two days later Mrs. Simpson brings Charlotte to the pediatrician’s office. She reports that Charlotte had been spending less time suckling during feedings and would fall asleep after nursing only a couple of minutes.

She says that Charlotte has been less active, and has had just one stool per day for the past two days. She also noticed that the whites of her eyes have developed a yellowish tinge.

This often results in the deposition of bilirubin in the skin, sclera, and mucous membranes, causing a yellowish pigmentation known as jaundice.

Now, there are some risk factors that can make hyperbilirubinemia more likely to occur.

These include gestational diabetes, an ABO blood group or Rh incompatibility between mother and baby, as well as preterm birth before 37 weeks, low birth weight below 1,500 grams, and being of East Asian race.

Other factors that increase the risk of hyperbilirubinemia include genetic disorders like glucose-6-phosphate disease, as well as birth injuries like bruising or cephalohematoma, which is when blood accumulates under the scalp caused by pressure during labor.

Now, there’s two types of bilirubin: unconjugated and conjugated. Unconjugated or indirect bilirubin is a waste product that results from the breakdown of red blood cells.

Unconjugated bilirubin is later linked or conjugated with glucuronic acid to produce conjugated or direct bilirubin, which can be excreted as bile by the liver into the small intestines.

So, what’s causing the hyperbilirubinemia largely depends on whether too much bilirubin is being produced, or too little is being excreted.

Unconjugated hyperbilirubinemia in newborns occurs when there’s an increased breakdown of red blood cells or the liver is unable to conjugate all the bilirubin that is produced.

This may occur because newborns have a great turnover and breakdown of red blood cells, but the liver is still relatively immature and inefficient at conjugating and excreting bilirubin.

This typically manifests after the first 24 hours from birth, and resolves within one to two weeks.

Another common cause of unconjugated hyperbilirubinemia is breast milk jaundice. The exact cause is unclear, but it is thought to be caused by substances within the milk itself, which inhibits the enzyme glucuronyl transferase, that converts unconjugated to conjugated bilirubin in the liver.

Breast milk jaundice usually occurs after 7 to 10 days of life, and eventually resolves, so continued breastfeeding is recommended.

There’s also breastfeeding jaundice, which instead is caused by decreased or poor intake of breast milk.

As a result, there is inadequate stooling and thus decreased elimination of bilirubin by stool, so the bilirubin gets reabsorbed into the blood.

Breastfeeding jaundice typically occurs during the first week of life, and is associated with mild dehydration and weight loss. This can usually be managed by increasing frequency and duration of breastfeeding.

Unconjugated hyperbilirubinemia is usually benign, but it can cause complications if the amount of unconjugated bilirubin rises a lot.

Since unconjugated bilirubin is fat-soluble, it can cross the blood brain barrier and deposit in the brain, leading to kernicterus.

Kernicterus can cause damage to the brain, resulting in symptoms like lethargy and poor feeding, and can progress to stupor, hypotonia, seizures, and even death.

On the other hand, conjugated hyperbilirubinemia is way less frequent in newborns. This occurs when the liver is unable to excrete bilirubin.

This typically happens in genetic conditions like Dubin-Johnson or Rotor syndrome, as well as infections like hepatitis or TORCH infections, and obstructions of the biliary tract.

Diagnosis of hyperbilirubinemia begins with history and physical examination of a newborn with jaundice.

A transcutaneous bilirubinometer or TcB can be used to measure the bilirubin levels. To confirm the diagnosis, a total serum bilirubin, or TSB, blood test should be done.

The TSB or TsB is plotted on an age-specific, percentile-based nomogram, referred to as the Bhutani nomogram.

Infants with hour-specific values equal or above the 95th percentile are at increased risk for developing severe hyperbilirubinemia that can evolve to bilirubin-induced neurologic dysfunction.

TSB also allows us to distinguish between unconjugated and conjugated hyperbilirubinemia, as well as a complete blood count, which may reveal anemia if there’s hemolysis, and elevated liver enzymes if there’s liver dysfunction.

Finally, a direct Coombs test, also known as the direct antiglobulin test, or DAT, can be done to check for blood incompatibility. Treatment of hyperbilirubinemia depends on the cause, and often self-resolves.

Newborns with severe unconjugated hyperbilirubinemia may benefit from non-UV phototherapy, which converts unconjugated bilirubin into a more water-soluble form that can be excreted by the body.

If phototherapy fails, then an exchange transfusion is indicated to remove the excess bilirubin from blood.