A 38-year-old woman comes to the emergency department because of a severe headache and multiple episodes of non-bloody, non-bilious emesis for the past few hours. Review of systems is significant for fatigue, constipation, and problems with peripheral field vision for the past few months. Her last menstrual period was 4 months ago. Temperature is 37.0°C (98.6°F), pulse is 58/min, respirations are 10/min, and blood pressure is 92/64 mm Hg. Physical examination shows a lethargic female complaining of severe pain. Visual field is tunneled with doubling of vision. Head magnetic resonance imaging is shown below: 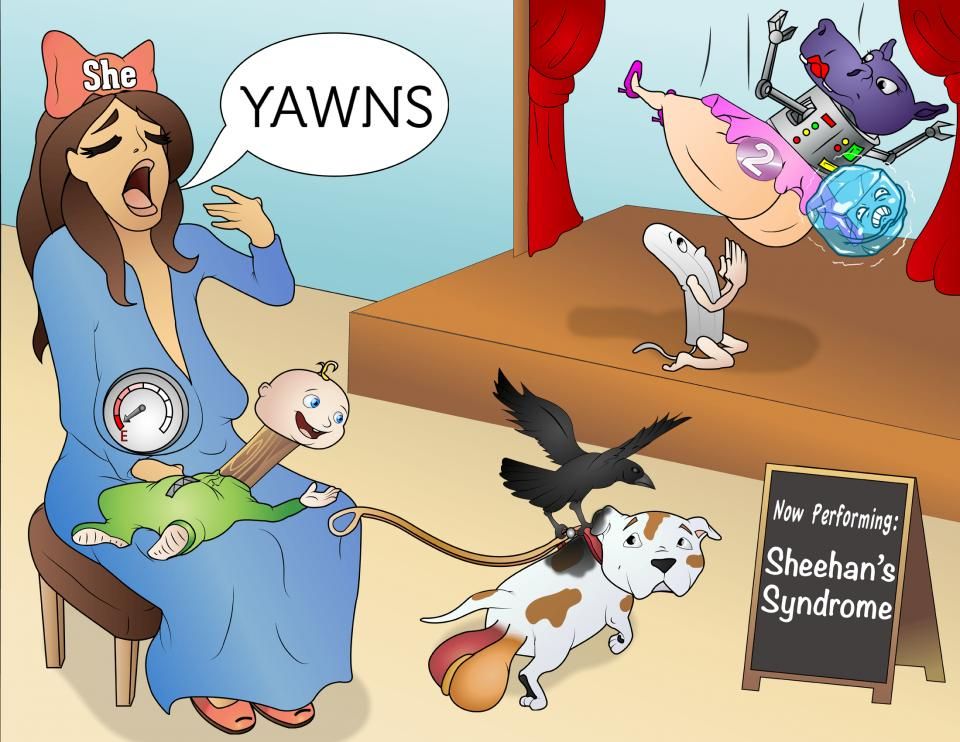 On your rounds, you admit 28-year-old Regina who presents with an 8-month history of depression, cold intolerance, fatigue, and reduced libido.

History revealed she delivered a healthy baby eight months ago, and that the delivery was complicated by a severe postpartum hemorrhage.

She has also been unable to breastfeed and hasn’t had her menstruation since giving birth. Physical examination is remarkable for bradycardia, weight loss, and delayed relaxation of her reflexes.

Then you see Alexander, a 58-year-old male with difficulty seeing things in his peripheral vision. He also describes a loss of sex drive, erectile dysfunction, and significant weight gain, all starting approximately two years ago.

Hypopituitarism typically occurs because of an acquired or congenital issue where the hypothalamus or pituitary is injured. Now, the clinical picture of hypopituitarism depends on which hormone is missing.

First, ACTH deficiency can present with symptoms such as orthostatic hypotension and tachycardia, weakness and lethargy, especially during periods of stress, like illness or during surgery.

Stress can also precipitate an adrenal crisis where the individuals have vascular collapse and shock, nausea, vomiting, abdominal pain, and mental status changes ranging from confusion to coma.

Next, TSH deficiency presents with symptoms of hypothyroidism, like fatigue, cold intolerance, depression, bradycardia, decreased appetite, and constipation, as well as dry skin and a puffy face and slow relaxing reflexes.

Third, growth hormone deficiency is more obvious in children who present with short stature and failure to thrive - meaning, low height and weight for their age.

In adults, it can cause a decrease in bone mineral density and muscle mass, and an increase in fat content.

Now for the reproductive hormones, gonadotropin deficiency results in decreased sex hormone production in both females and males, with different consequences.

Pre-menopausal females can have menopause-like symptoms such as infertility, irregular periods or absent periods, hot flashes, and vaginal atrophy.

By contrast, females who have already gone through menopause are mostly asymptomatic because the ovaries are already at rest.

Males can have infertility, as well as a decreased sex drive, erectile dysfunction, low energy, weight gain, and in severe cases, hot flashes.

Finally, moving on to prolactin deficiency, it causes an inability to lactate after delivery, which is called agalactorrhea; absent menstruation, or amenorrhea; and cold intolerance.

Diagnosis is based on suggestive symptoms and basal serum hormone measurements; however, dynamic testing may also be required in some cases.

First, when ACTH deficiency is suspected, an 8 AM serum cortisol level and serum ACTH are required, both of which should be low.

If results are inconclusive, an ACTH-stimulation test with Cosyntropin, a synthetic analog of ACTH, is required.

Serum cortisol is measured one hour after Cosyntropin administration, and if it rises, that confirms a deficiency in pituitary ACTH production.

That’s because although daily growth hormone secretion is pulsatile, it stimulates the liver to release a constant amount of IGF-1 throughout the day which can be used as an indicator for GH secretion.

Low serum IGF-1 levels indicate a growth hormone deficiency. However, this needs to be confirmed by using the arginine-L-Dopa combination test, where growth hormone levels are measured before and after giving an arginine hydrochloride infusion and oral levo-dopamine.

Fourth, FSH and LH deficiency diagnosis in females with menstrual irregularities is based on low serum FSH, LH, and estradiol levels, as well as on a 10-day medroxyprogesterone test.

This is when a female is given medroxyprogesterone, a type of progesterone, for 10 days, to see if that triggers menstrual bleeding.

In males, gonadotropin insufficiency diagnosis is based on low serum testosterone, FSH, and LH levels.

And fifth, serum prolactin levels are typically not measured because what’s considered a normal level, can vary from person to person.

Now, in terms of the medications that are used to treat anterior pituitary hormone deficiencies, ACTH deficiency is usually treated with synthetic glucocorticoids like hydrocortisone.

Gonadotropin insufficiency is treated with testosterone in males, and combined estrogen and progestin therapy for females to replace the missing sex hormones. Finally, at the moment, there are currently no treatments available for prolactin deficiency.

Ok, so there are a few causes of hypopituitarism to know. The first high-yield cause is Sheehan syndrome, which is hypopituitarism secondary to ischemic pituitary necrosis due to severe postpartum bleeding, often this causes a decrease in all hormones.

Normally, labor and delivery can cause mild blood loss without any long-term complications. However, severe bleeding can decrease blood supply to the pituitary, causing ischemia and necrosis.

Another factor is pregnancy-induced pituitary growth where the gland outgrows available blood supply during pregnancy.

This growth is usually the result of the estrogen surge that occurs during pregnancy, which leads to hyperplasia of lactotrophs, the cells responsible for prolactin production.

Symptom-wise, the syndrome is suspected in those who just gave birth and present with failure to lactate and absent menstruation, both due to prolactin deficiency.

In other cases, individuals can develop additional features of hypopituitarism, like hypothyroidism or cortisol deficiency, depending on the extent of necrosis.

Diagnosis is clinical, based entirely on history of pregnancy and birth and symptoms like galactorrea.

Although prolactin levels are usually not measured, the basal levels of the other pituitary hormones are necessary.

Next, empty sella syndrome is when the pituitary gland shrinks due to atrophy or compression and the sella turcica is filled with CSF.

The syndrome can occur as a primary disorder, where the cause of the atrophy is unknown but it’s commonly associated with obese women.

Some high-yield secondary causes include pituitary surgery, head trauma, and idiopathic intracranial hypertension, previously known as pseudotumor cerebri, which is increased intracranial pressure without a detectable cause.

Now, most individuals are asymptomatic because pituitary function is typically normal. Others can develop hypopituitarism, headaches, high blood pressure, and, rarely, increased intracranial pressure, cerebrospinal fluid leakage through the nose, or cerebrospinal rhinorrhea, and vision abnormalities.

Diagnosis is made by head CT or MRI, which shows an abnormally-sized or absent pituitary and accumulation of CSF in sella turcica.

Full basal serum hormone measurements might also be required. No specific therapy is needed for an empty sella alone, but hormonal replacement might be needed.