A 25-year-old nulligravida woman comes to the office because of difficulty getting pregnant. She has no medical conditions, no history of sexually transmitted infections, and no other complaints except for mild chronic pelvic pain. She has been having regular intercourse for the past 12 months and has a regular 28-day cycle. Pelvic examination shows a tender right adnexal mass which shows up as a 3 x 2 cm homogenous cystic mass on ultrasonography. A working diagnosis of endometriosis is established. Which of the following treatment options would be most appropriate for this patient? 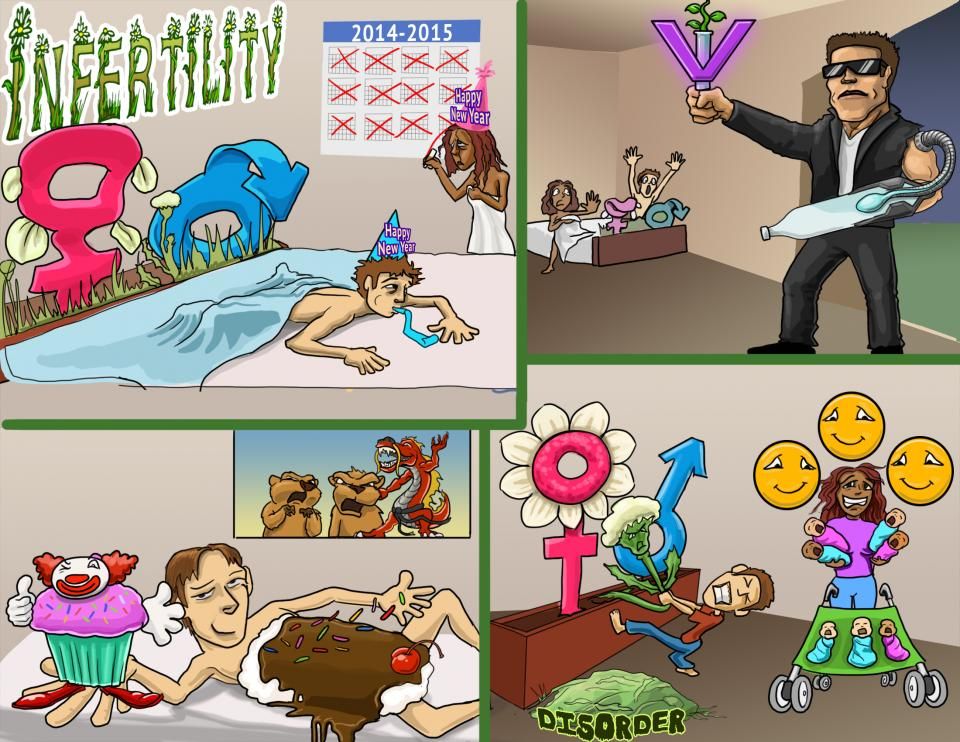 Infertility is classically defined as the inability of a couple to conceive after 12 months of sexual intercourse without using contraception. Sometimes, the evaluation for infertility begins at 6 months, depending on female and male factors. Female factors include age over 35, other gynecologic conditions like endometriosis, prior pelvic inflammatory disease or suspected uterine pathology, like in women who have undergone uterine surgery in the past. Evaluation should also start at 6 months in females with risk factors for premature ovarian failure, like previous ovarian surgery, chemotherapy or pelvic radiation therapy, autoimmune disease, smoking, or a family history. Male factors include history of testicular surgery or radiation, chemotherapy, adult mumps, impotence or other sexual dysfunction, or history of fertility issues with a prior partner.

Semen volume is normally greater than 2 milliliters, sperm concentration should be above 15 million spermatozoa per milliliter of ejaculate, and total sperm count should be over 40 million spermatozoa per ejaculate. Total sperm motility should be over 40%, meaning over 40% of sperm should be moving, with at least 32% showing forward motility. The last parameter is morphology - at least 4% of sperm should have a head, a neck, and a single tail. That may sound like a low bar, but that’s all it takes.

Sperm number abnormalities are the most frequent cause of infertility, and they can range from oligospermia, meaning less than 15 million sperm per milliliter of ejaculate, to azoospermia, which is the absence of sperm in the semen. These findings should prompt a morning serum testosterone level, and serum FSH and LH levels.

High FSH and LH, and low testosterone in the presence or oligo or azoospermia suggest a primary defect in spermatogenesis, also called primary, or hypergonadotropic hypogonadism.

One genetic cause is Klinefelter syndrome, the karyotype shows at least one extra X chromosome - so either 47, XXY, or more. Physically, these individuals are typically tall with long legs, a short torso, with broad hips and gynecomastia, or development of breast tissue. They usually have less muscle mass, less facial and body hair, and a genital examination may reveal small, hard testicles.

Another genetic cause is a Y chromosome microdeletions, and it’s when one or more genes is missing from the Y chromosome - but there are otherwise no clinical signs. Genetic testing using white blood cells from a blood sample can be done to confirm the diagnosis.

Finally, acquired causes include viral orchitis, especially mumps, history of radiation in the testicular region, and drugs that impair normal spermatogenesis. Among these drugs, the most important are alkylating drugs, like cyclophosphamide and chlorambucil. Antiandrogen medication, like flutamide, cyproterone, and spironolactone, and also other drugs like ketoconazole and cimetidine may inhibit testicular androgen production or action and also impair spermatogenesis. If the medication is still being taken, then stopping the medication, if possible, can sometimes improve fertility.

For individuals with primary hypogonadism, if there is no sperm in the ejaculate or in the testicular biopsy, there currently aren’t any treatments available to improve the fertility prognosis. If there is sperm in the ejaculate or the testicular biopsy, Some of that sperm may be retrievable and used to conceive with the help of assisted reproduction techniques, like in vitro fertilization, or IVF, in conjunction with intracytoplasmic sperm injection, or ICSI. Basically, with IVF alone, sperm is collected from the male, and oocytes are collected from the female, and they’re put together in a petri dish, to allowing for fertilization to occur. With ICSI, a sperm is literally injected into the cytoplasm of the oocyte, which greatly increases the chance of conception - but bear in mind that in individuals with genetic causes, the mutations could be passed down to the offspring, so genetic counselling is required beforehand.

Ok, now if FSH, LH and also testosterone levels are low, that points towards hypopituitarism, so an issue with the pituitary or the hypothalamus - also called secondary, or hypogonadotropic hypogonadism. Most commonly, this is due to a pituitary macroadenoma, which is a benign tumor of the pituitary larger than 1 centimeter. Non-endocrinologic symptoms of a macroadenoma include compression symptoms, like headache and visual impairment. These symptoms typically trigger obtaining a head MRI to identify the tumor. Then, serum ACTH, cortisol, TSH and T4, insulin-like growth factor 1 should be drawn to check for ACTH, TSH, and growth hormone deficiency, respectively. Serum prolactin should also be determined in this situation, not to assess prolactin deficiency but rather to screen for prolactin excess. That’s because macroadenomas can derive from lactotroph cells, and secrete excess prolactin. At the same time, they compress the rest of the pituitary and cause other pituitary hormone deficiencies. Serum prolactin higher than 200 nanograms per milliliter confirms that the adenoma is, in fact, a prolactinoma, which is treated with dopamine agonists like cabergoline. That inhibits prolactin secretion just like dopamine would, and makes the macroadenoma shrink. For all other macroadenomas that are not prolactinomas, treatment is transsphenoidal resection, which is when the tumor is removed through the nose.

Hypopituitarism may also be because of congenital GnRH deficiency - which is when the hypothalamus doesn’t make GnRH at all. One subtype is Kallmann syndrome, which is when the GnRH secreting neurons fail to form during fetal development. These neurons are closely linked to olfactory neurons, so individuals with Kallmann syndrome may have absent, delayed or incomplete puberty, as well as anosmia - or absent sense of smell.

Other causes of hypopituitarism include head trauma, prior pituitary surgery or radiation, and large tumors of the central nervous system, like a craniopharyngioma, which can also be identified on an MRI.

In individuals with secondary hypogonadism, once the underlying condition improves, FSH and LH normalize and spermatogenesis improves after 6 to 12 months. If 6 to 12 months later, sperm count abnormalities are still present, exogenous gonadotropin therapy can be initiated.

The first step is to initiate treatment with HCG, which has the biological activity of LH, and leads to increased testosterone levels. Individuals can self-administer HCG via an IM injection. The initial dose is 2,000 units three times a week, always on the same three days - for example, Mondays, Wednesdays and Fridays. Serum testosterone is measured every one to two months, and the dose can be increased up to 10,000 units three times a week, until testosterone levels are between 400 and 800 ng/dL.

At that point, the sperm count is measured every one to three months, and typically reaches 5 to 10 million sperm per milliliter of ejaculate in about 6 months.

If the sperm count hits the target, the HCG dose should be maintained, and a sperm analysis should be checked every 1 to 3 months. If sperm count is still lower than 5 to 10 million sperm per milliliter of ejaculate 6 months later, human menopausal gonadotropin, or HMG, or recombinant human FSH, is added - which acts as a surrogate for FSH. HMG is administered as an IM dose of 75 units, 3 times a week, and can be increased to up to 150 units, 3 times a week, until sperm count reaches at least 5 to 10 million sperm per milliliter of ejaculate. Recombinant human FSH is administered subcutaneously, at a dose of 150 to 300 units every other day, for 18 months. If pregnancy does not occur spontaneously within 12 to 24 months of achieving any sperm in the ejaculate during treatment, the next option are assisted reproduction techniques, like intrauterine insemination, and IVF with or without ICSI. If serum testosterone, FSH and LH are normal in the presence of azoospermia, and the testicular semen volume is normal, the most likely diagnosis is a sperm transport disorder, which includes obstructive azoospermia as well as retrograde ejaculation.

Obstructions of the epididymis, ejaculatory duct, or vas deferens can be the result of prior testicular surgery, or infections - like viral orchitis, in adults who get mumps. They can be diagnosed with a scrotal or transrectal ultrasound.

All individuals with obstructive azoospermia should get a testicular biopsy, and if sperm is found, it can be frozen for possible future use in IVF with ICSI.

Sometimes, these obstructions can be corrected by microsurgical end-to-end anastomosis, to bypass the obstruction. However, for individuals with uncorrectable obstructions, or for those with congenital bilateral absence of the vas deferens, assisted reproduction techniques like IVF with ICSI are the only option. Bear in mind, however, that in those carrying mutations in the CFTR gene, there is a chance they’ll pass down the mutation to their offspring, so these individuals should first receive genetic counselling.

Retrograde ejaculation, on the other hand, happens when the sperm goes into the bladder instead of out through the urethra during ejaculation. Some risk factors for retrograde ejaculation include prior prostatic surgery, diabetes, spinal cord injury, and taking some psychiatric medications, like thioridazine, chlorpromazine and amitriptyline, or the antihypertensive drug doxazosin.

Retrograde ejaculation can be confirmed by demonstrating sperm presence in postcoital urine, and treatment options include oral sympathomimetic medications like ephedrine sulphate or phenylpropanolamine, which have been shown to improve bladder neck closure. If these medications fail, or if retrograde ejaculation is secondary to spinal cord injury, assisted reproduction techniques like IVF with ICSI can be attempted using sperm obtained from the urine sample.

If none of these causes are identified for male infertility, then a varicocele may be to blame - especially when it’s clinically visible or palpable. In other words, the simple presence of a varicocele doesn’t automatically mean that the aforementioned workup is skipped over. Now if a varicocele is suspected as the cause, then color Doppler examination can be done to confirm the varicocele, and surgical correction of the varicocele may improve sperm count and fertility.