A 2-month-old infant girl is brought to the emergency department by her parents because she has been febrile and vomiting for the past two days. The infant appears irritable. Examination of her abdomen shows redness, warmth, and swelling over the abdomen (shown below):

Credit: Wikimedia Commons
Her parents revealed that a similar episode occurred when she was 1-month-old. After extensive laboratory investigations, it is discovered that she has a defect in an important integrin protein found on phagocytes involved with extravasation. Which of the following is most likely to be present in this condition? 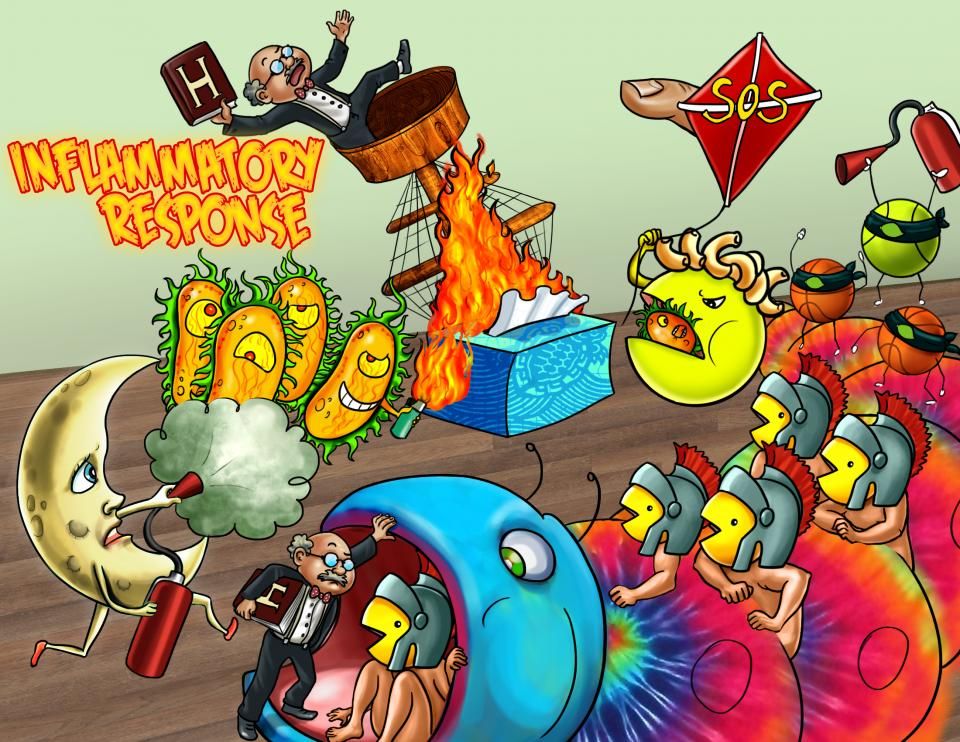 Inflammation classically describes four key signs - each of which have a latin derivation.

Calor or heat, dolor or pain, rubor or redness, and tumor or swelling.

Sometimes these four signs combine to cause a fifth sign, which is functio laesa or temporary loss of function due to pain or swelling.

Okay - so inflammation usually starts with some stimuli, like a pathogen.

Now, even though pathogens are a common cause of infection which can lead to inflammation, inflammation can be caused by other things as well like toxins and trauma.

For example, after an intense workout, your muscles may feel sore - that’s due to inflammation trying to repair your overused muscle fibers.

Ultimately, the goal of inflammation is to respond to the stimuli and restore balance.

Oftentimes that includes eliminating the cause of tissue injury, clearing out necrotic or dead cells, and starting tissue repair.

Broadly speaking, inflammation can be triggered by external and internal factors.

Virulence factors are molecules that help pathogens colonize tissues and cause infection.

Our immune system recognizes virulence factors and PAMPs as foreign substances, and can trigger an inflammatory response against them.

Now, in terms of internal factors, it turns out that there’s an endogenous equivalent to PAMPs, called damage associated molecular patterns or DAMPs.

DAMPs are intracellular proteins that get released when a cell’s plasma membrane is injured or when a cell dies.

So DAMPs are a signal that there’s serious cell damage and they trigger inflammation.

Now, PAMPs and DAMPs are recognized by Pattern Recognition Receptors or PRRs, which are cell surface receptors on various leukocytes that help to activate those cells and spark the inflammatory response, which can be thought of as the innate immune system.

Key features are that this response is non-specific - meaning that PRRs don’t distinguish one specific pathogen from another, although they can distinguish between broad categories like viruses from bacteria.

Also, the response is really fast - occurring within minutes to hours, and there’s no memory associated with innate responses.

The inflammatory process usually begins with either macrophages or mast cells, both of which are found in the tissues.

When there’s tissue damage, these cells respond to the PAMPs or DAMPs.

Mast cells have granules containing different inflammatory mediators like histamine, serotonin, cytokines, and eicosanoids, such as prostaglandins and leukotrienes.

These inflammatory mediators act on the endothelial cells surrounding the capillaries nearby, causing them to separate from each other.

In addition, macrophages - which are the garbage truck of the body - begin to eat up invading pathogens.

The release of cytokines causes capillaries to get larger, and increase vascular permeability, allowing plasma proteins and fluids to leave the circulation.