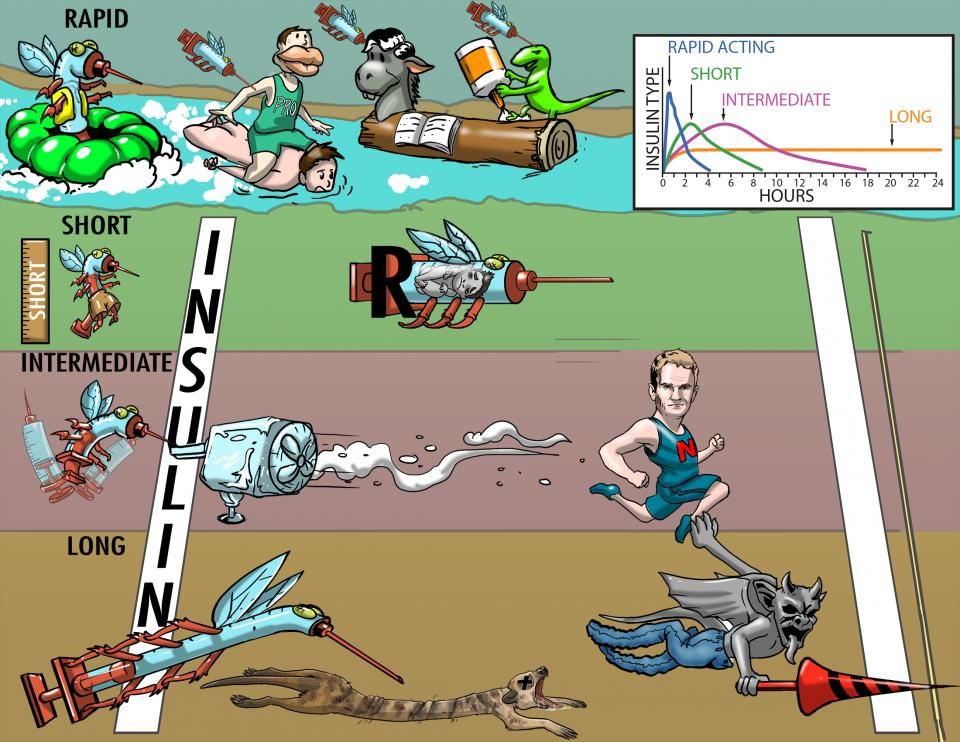 On the other hand, type 2 diabetes mellitus is characterized by insulin resistance, which is when tissue cells have trouble responding to insulin in order to use glucose from the blood; as a result, tissue cells starve for energy despite having high blood glucose levels, which is called hyperglycemia.

Insulin is also used in the management of gestational diabetes, diabetic complications, like diabetic ketoacidosis and hyperglycemic hyperosmolar nonketotic coma, as well as in hyperkalemia.

Now, there are five main categories of insulin based on their onset of action and duration of effect. These include rapid-acting, short-acting or regular, intermediate-acting, long-acting, and ultra long-acting insulins.

All categories of insulin can be given subcutaneous injection or through an insulin pump, while the short-acting insulin can also be given intravenously.

Now the short-acting, or regular, insulin starts working 30 minutes after administration, with a peak effect at 2 to 3 hours, and can last between 6 to 8 hours.

Next, there’s rapid acting insulins which include insulin aspart, lispro, and glulisine. These medications begin working within 5 to 15 minutes of administration, with a peak effect at 30 minutes, and may last for 3 to 5 hours. Another rapid acting insulin is inhaled insulin, which can only be used as an adjunct to therapy with injected insulins, and never by itself.

Next up is the intermediate-acting insulin, known as neutral protamine hagedorn or NPH insulin. NPH insulin only becomes active around 1 to 2 hours after administration, with a peak effect after 4 hours, and lasts for 16 to 24 hours.

Moving on, we have the long-acting insulins, which include insulin glargine and detemir. Once administered, glargine forms a precipitate at the injection site before it’s slowly released into the bloodstream, while detemir binds to albumin in the blood for a time before dissociating and becoming active.

This accounts for their delayed onset of action, which is between 1 to 2 hours of administration, as well as their long duration. In addition, these medications do not have a peak effect. Detemir typically lasts for around 20 hours, whereas glargine can last for up to 24 hours.

Finally, ultra long acting insulin is a relatively new preparation called insulin degludec. Degludec is a depot injection, meaning the medication is deposited beneath the skin and slowly releases insulin into the blood. Its onset of action is between 1 to 2 hours with no peak effect, and its duration of action can last up to 48 hours.

Now, one of the most commonly used insulin regimens is the basal-bolus insulin regimen, in which a basal insulin like intermediate-, long-, or ultra long- acting insulin is given before bed to maintain fasting blood glucose levels, and a bolus of a rapid- or short-acting insulin is given before meals to control postprandial glucose levels. Typically a client would need roughly 3 injections of a bolus insulin, as well as 1 or 2 injections of a basal insulin.

Now, to offer a simpler regimen with fewer injections per day, intermediate-acting insulin is usually pre-mixed with a rapid-acting or regular insulin in one syringe or pen. This combination is typically taken only two times a day, before breakfast and before dinner.

Once administered, insulin binds to its receptors on the surface of the cell membrane on the insulin-responsive tissues like muscle cells and adipose tissue, and facilitates their uptake of glucose from the blood.

In addition, insulin acts on the liver and muscles to promote glycogenesis, which is the storage of glucose as glycogen.

In the liver and adipose tissue, insulin also stimulates lipogenesis, or the synthesis of fatty acids and triglycerides; while in muscles, it also promotes amino acid uptake and protein synthesis.

On the flip side, insulin inhibits the breakdown of glycogen, lipids and proteins in these tissues. Finally, insulin activates the sodium potassium ATPase pumps, which shift potassium into the intracellular space, thereby decreasing potassium levels in the blood.

Now, the main side effect of insulin therapy arises when too much insulin is administered, leading to hypoglycemia. This is more common with insulins that have a peak effect. Some symptoms of hypoglycemia include headache, dizziness, anxiety, tachycardia, sweating, hunger, and weakness.

In addition, repeated insulin injection at the same area can lead to lipodystrophy, where there’s an atrophy or hypertrophy of the subcutaneous fat. This presents either as a skin depression or a raised skin lump, respectively. Some clients may also develop anaphylactic reactions.

Now, insulin is contraindicated in clients who have hypoglycemia, which would be exacerbated. Caution should be taken in clients who are at higher risk of hypoglycemia, such as elderly clients, those with persistent vomiting, or diarrhea, as well as clients with hepatic or renal disease.