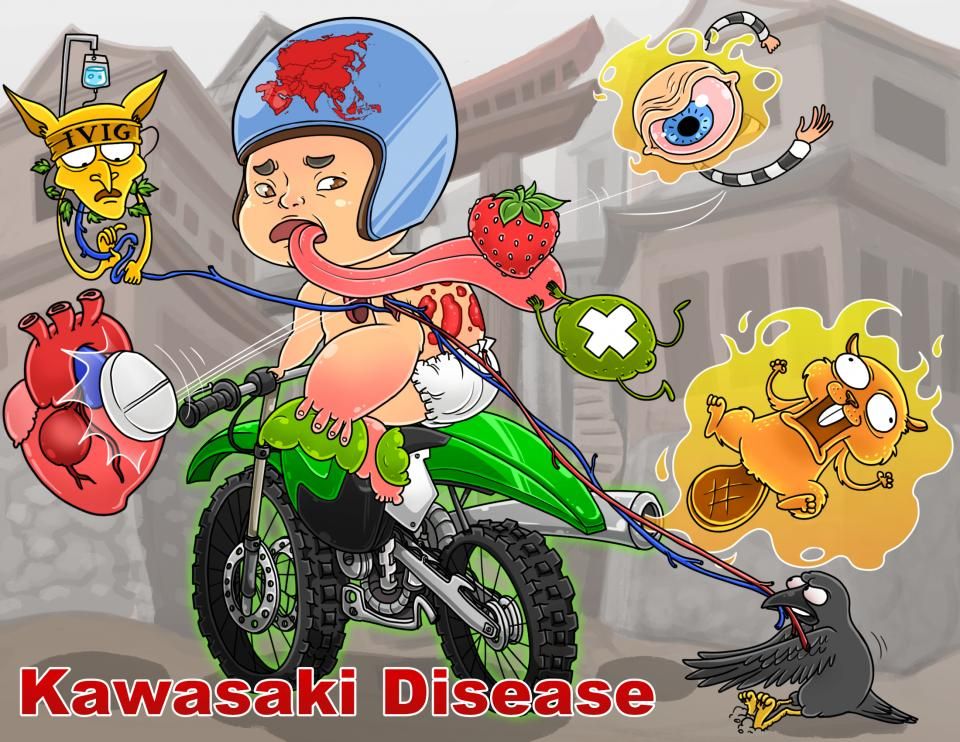 Kawasaki disease is a vasculitic disease in which medium-sized arteries throughout the body become inflamed.

It typically affects young children from 1 to 5 years old, but can sometimes affect teenagers and even adults.

It is usually a self-limited condition, with fever and manifestations of acute inflammation for at least five days, lasting for an average of 12 days without therapy, and it’s not very responsive to treatment with paracetamol or ibuprofen.

The most frequent and characteristic signs and symptoms, included in the diagnostic criteria, can be remembered with the mnemonic CRASH.

First off, they may typically present with bilateral bulbar Conjunctival injection, which typically begins within days of the onset of fever, and leads to photophobia or discomfort or pain to the eyes due to light exposure.

Then there’s polymorphous Rash that usually begins during the first few days of illness due to sensitivity to sunlight.

A stands for lymphadenopathy, which tends to primarily involve the anterior cervical nodes overlying the sternocleidomastoid muscles.

Next up, there are oral mucous membrane changes, including injected or fissured lips, injected pharynx, or Strawberry tongue.

And finally, there are peripheral extremity changes, including erythema of palms or soles, edema of Hands or feet, and periungual desquamation.

To make a diagnosis of Kawasaki, individuals must meet at least four of these features. Other common features include irritability, rhinorrhea, cough, vomiting, diarrhea, abdominal pain, and joint pain.

A severe complication of Kawasaki disease is cardiovascular disease, which most commonly presents as coronary artery aneurysms, and can lead to arrhythmias, myocardial infarction, and ultimately, heart failure.

Typically, an ECG and echocardiography are done in individuals with Kawasaki to look for cardiovascular involvement.

On rare occasion, if echocardiography isn’t able to image the coronary arteries, computed tomographic angiography or magnetic resonance angiography can be used instead.

Individuals with coronary aneurysms have to undergo stress testing to evaluate for myocardial perfusion and inducible ischemia, which measures the heart's ability to respond to increased stress or demand in a controlled setting. The stress is induced by exercise, which is preferred, or with the medication dobutamine.

Some children are suspected of having Kawasaki disease when they have an unexplained fever for at least five days, even if they have only two or three of the diagnostic criteria. That’s because these children may have incomplete or atypical Kawasaki disease.

This is also true of infants less than six months of age with unexplained fever for at least seven days, even without any of the clinical findings of Kawasaki disease. That’s important because infants are at a greater risk for cardiovascular disease.

The criteria to diagnose incomplete Kawasaki include an CRP above 3 milligrams per deciLiter and ESR above 40 millimeters per hour, along with three or more abnormal supplemental laboratory findings, or abnormal echocardiography.

Another supplementary finding is a pyuria - having than 10 white blood cells per high-power field - on urine microscopy.

For management, individuals with Kawasaki disease should get a single dose of IVIG - 2 grams per kilogram over 8 to 12 hours, administered within the first 10 days of illness, before aneurysms typically develop.