A 65-years-old man comes to the clinic due to the gradual onset of chest pain, dyspnea, and night sweats for the past 2 months. He also reports a nagging non-productive cough for which he tried over the counter cough syrup with no relief. He does not drink alcohol but has smoked a pack of cigarettes daily for the past 40 years. Temperature is 37.0 °C (98.6 °F), pulse is 80/min, respirations are 20/min, and blood pressure is 135/85 mmHg. On physical examination, decreased air movement and unilateral dullness to percussion at the lung base are noted on the left side. Computed tomography is obtained and shown below:

This patient’s condition is most likely associated with which of the following occupational exposures? 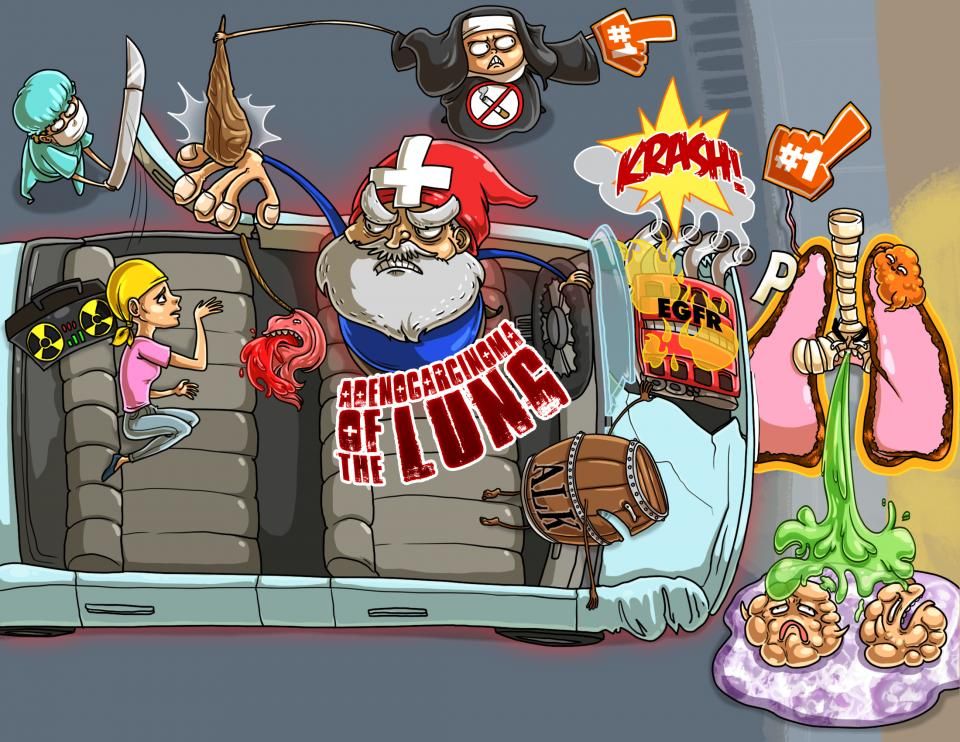 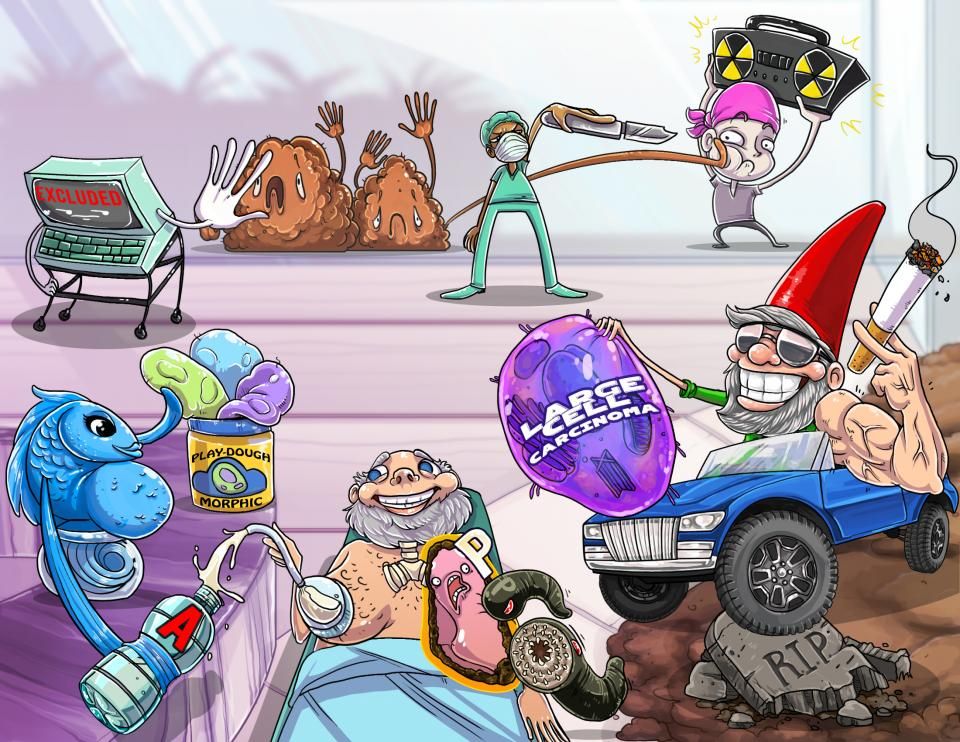 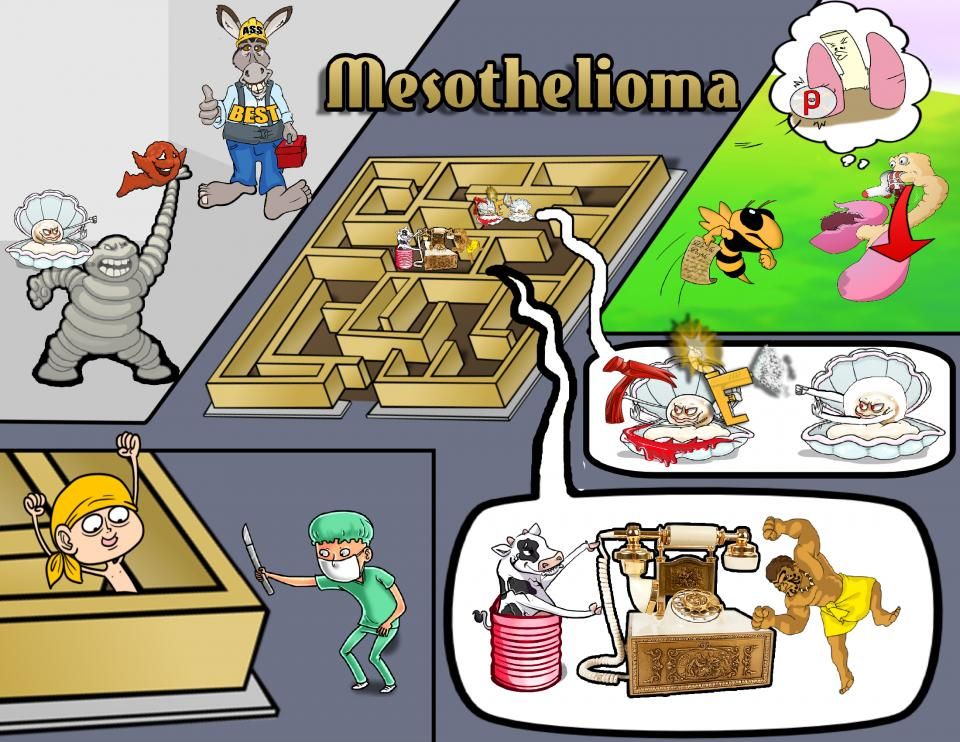 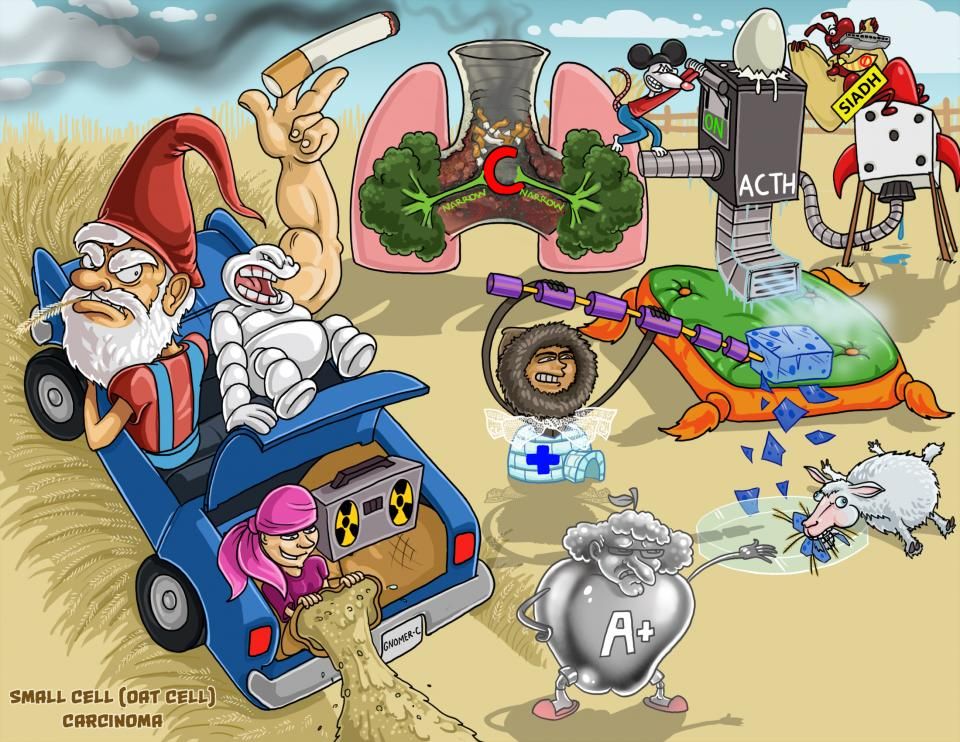 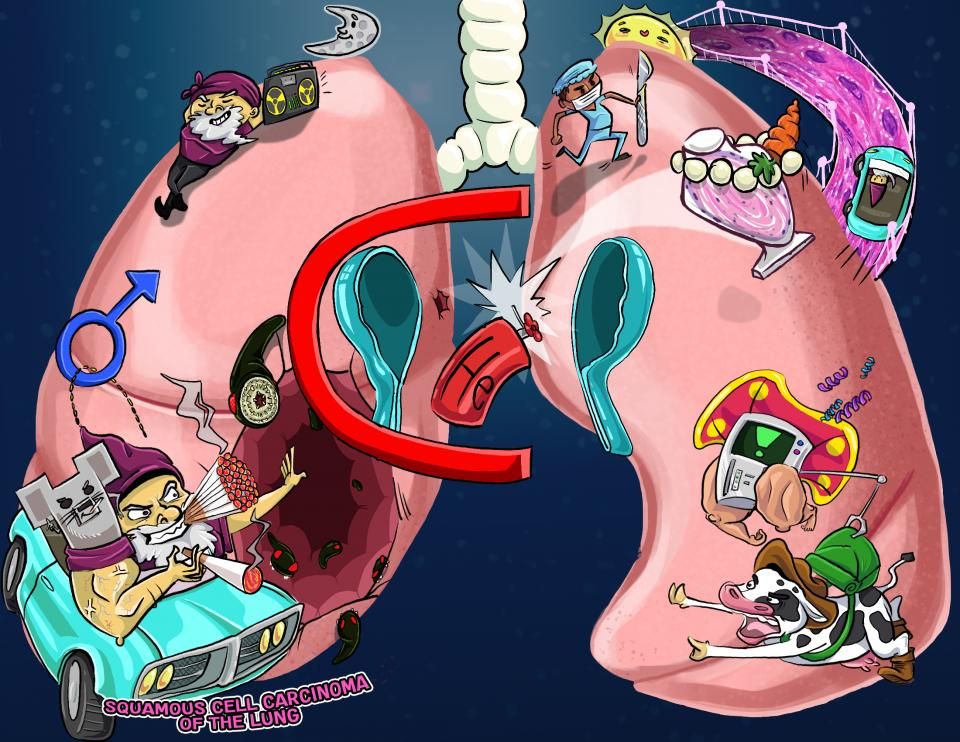 Two people came to the clinic one day. First is a 65-year-old named Alex, who presents with a two-month history of dry, persistent cough and weight loss of around 7 pounds without dieting. He also says he coughs up blood sometimes but denies fever, dyspnea, sore throat, rhinorrhea or any chest pain. Alex has a history of asthma and hypertension, and smoked 1 pack of cigarettes daily for 45 years. On examination, his breath sounds are diminished at the right lung base.

The other individual is Clara, who’s an 80-year-old retiree. Before her retirement, Clara was a construction site supervisor. She complains of increasing shortness of breath, which started ten months ago, and new onset of myalgia located on the right side of her chest. Physical examination reveals decreased breath sounds in the right lung base along with dullness to percussion. Chest X-rays were ordered for both people. In Alex’s case, it showed a single, coin-like lesion on the right lung base. Clara’s scan showed pleural effusion, irregular pleural thickening, and two ivory white, calcified pleural plaques at the base of her right lung.

Both people have cancer involving the lung. But first, a bit of physiology. Lining the airways are several types of epithelial cells that serve multiple functions. These include ciliated cells that have hair-like project called cilia that work to sweep foreign particles and pathogens back to the throat to be swallowed. Another type, called goblet cells secrete mucin to moisten the airways and trap foreign pathogens. There are also basal cells that are thought to be able to differentiate into other cells in the epithelium, club cells that act to protect the bronchiolar epithelium, and neuroendocrine cells that secrete hormones into the blood. On the outside, the lungs are covered by the mesothelium which consists of the parietal pleura and the visceral pleura. Between them, there’s the pleural space, where the fluid produced by the epithelial cells is released, which acts as a lubricant to allow the layers to slide effortlessly against each other during respiratory movements.

Now, let’s begin with lung cancer. The two most common types are small cell lung cancer and non-small cell cancer, both sharing common pathophysiology. Cells of the lungs can undergo mutations that cause them to divide uncontrollably and replace the normal healthy lung tissue. Eventually these cells will form a tumor. To supply it, new blood vessels also develop and this is called angiogenesis. Sometimes the tumor can metastasize and spread via blood vessels or lymphatics and establish secondary sites throughout the body. Particularly at risk for lung cancer metastasis are the mediastinum and hilar lymph nodes because of their proximity to the lungs, so remember this as it’s very high yield! Other common sites include the liver, adrenal glands, bones, and brain. There are many risk factors for lung cancer. Tobacco smoking is the most important one, which accounts for more than 90% of cases of lung cancer. This usually comes in the form of cigarettes, but also includes cigars, pipes, and hookah. There is a dose-dependent linear relationship between lung cancer risk and pack-years, which is the number of cigarette packs per day times the number of years of smoking. Second-hand smoke also increases the risk of lung cancer. The second leading risk factor for lung cancer is exposure to radon, a colorless, odorless gas which is a natural breakdown product of uranium found in the soil, so it sometimes accumulate in basements. Other environmental factors include asbestos, a mineral made of long, fibrous crystals that was commonly used for construction until the 1980s in the US. The most common type of cancer caused by asbestos is adenocarcinoma. Next there’s air pollution and ionizing radiation from medical imaging with chest X rays and CT scans, or during radiation therapy.

The symptoms of lung cancer vary based on the size and location of the tumor, whether or not it has spread to other organs, and whether or not it secretes hormones. Initially, individuals may be completely asymptomatic. Over time, in response to the cancer, the body mounts an immune response to fight it off. This results in the release of inflammatory chemokines like TNF-alpha, IL1-beta, and IL-6. The chemokines cause unintentional weight loss, fever, malaise, and night sweat. If the primary tumor physically obstructs the airway and presses on surrounding tissue, it can cause coughing, shortness of breath, wheezing. Since the obstruction can decrease the clearance of mucus, it also increase the risk of developing pneumonia. Sometimes, the tumor obstructs the bronchus and prevents the ventilation for a lobe, or even an entire lung! This will cause obstruction atelectasis where the lung could collapse. Compression of nearby nerves can cause pain, and compression of specific nerves like the recurrent laryngeal nerve and phrenic nerves can cause hoarseness or difficulty breathing, respectively. Another high yield fact is that compression of nearby vessels, like the superior vena cava, can prevent blood from draining from the head, leading to facial swelling or puffiness. If the swelling occurs in the epiglottis, it could cause difficulty breathing and if there’s swelling in the brain, it could cause headaches and altered mental status; both of which can be medical emergencies! Finally, if tumor necrosis occurs or if cancer cells invade a blood vessel, individuals can experience hemoptysis. A high yield fact is that sometimes a tumor can arise in the superior sulcus, which is the space formed by the subclavian vessels, and these are called Pancoast tumors. These are most often non-small cell carcinomas and can compress the blood vessels and nerves located in the region. Some important symptoms to remember include arm muscle weakness and paresthesia due to compression of the brachial plexus, and pain that irradiates to the scapula and arm on the affected side. Since Pancoast tumors near the thoracic inlet can compress cervical sympathetic ganglia, it can lead to Horner syndrome which causes constricted pupil, drooping upper eyelid, which is called ptosis, and anhidrosis, or the inability to sweat.

Ok, now let’s discuss small cell carcinomas, which account for a small percentage of lung cancer. They are associated with amplification of the Myc oncogene and originate from small, ovoidal, neuroendocrine cells. These tumors usually develop centrally in the lung, near a main bronchus. They also grow the fastest and tend to rapidly metastasize to other organs when compared to non-small cell lung cancers. Small cell carcinomas can sometimes secrete hormones and that can lead to what is called a paraneoplastic syndrome. One example is they can releases adrenocorticotropic hormone or ACTH. This leads to bilateral adrenal enlargement and an increase in cortisol production. The result is Cushing’s syndrome and some symptoms include elevated blood glucose, high blood pressure, skin hyperpigmentation, easy bruising, osteoporosis, frequent infections from a weakened immune system, and weight gain. Next, these tumors can also release antidiuretic hormone. This is called syndrome of inappropriate antidiuretic hormone or SIADH, which increases water reabsorption in the renal collecting ducts, leading to high blood pressure, hyponatremia, edema, and concentrated urine. Finally, small cell carcinoma can trigger the production of autoantibodies against neurons. If cerebellar neurons are affected, it leads to symptoms like ataxia and nystagmus. If neurons in the cerebrum are affected, then it can lead to symptoms like dementia and seizures. There’s also Lambert-Eaton syndrome where the autoantibodies target voltage gated calcium channels on the presynaptic membrane at the neuromuscular junction. This condition results in muscle weakness, especially the proximal muscles in the legs, but it also causes double vision, drooping of the eyelids, and difficulty swallowing.

The other type is non-small cell carcinomas. They account for most lung cancers and can be further subdivided into four categories: adenocarcinomas which frequently form glandular structures or have the ability to generate mucin. They are associated with mutations of the KRAS, EGFR and ALK genes. In squamous cell carcinomas the cells are square shaped and produce keratin; carcinoid tumors that arise from mature neuroendocrine cells; and large cell carcinomas where the cancer cells are poorly differentiated and lack the characteristics of the other types. Now, these carcinomas are also more of a mixed bag in terms of where they’re located. First, adenocarcinomas tend to develop peripherally, in a bronchiole or alveolar wall, and they are associated with non-smokers. However, it’s worth mentioning that even though adenocarcinomas are the most frequent type of lung cancer in non-smokers, the majority of adenocarcinomas occur in smokers. Adenocarcinomas are also associated with hypertrophic osteoarthropathy, or clubbing of the digits. This is due to abnormal proliferation of skin and periosteal tissues involving the extremities. A rare subtype of adenocarcinoma is called bronchoalveolar carcinoma and it originates from the columnar, mucin-secreting alveolar cells located in the periphery of the lung. Its typical presentation includes dyspnea and a cough that produces a large amount of a golden-brown sputum. This type of adenocarcinoma usually has a better prognosis. Second, squamous cell carcinoma tends to be centrally located. It has the highest association with smoking. A classic paraneoplastic syndrome associated with this carcinoma is that they release parathyroid hormone related protein. This protein acts like parathyroid hormone and increases bone resorption which increase calcium levels in the blood, but cause bones to become brittle. Finally, large cell carcinomas and bronchial carcinoid tumors can be found throughout the lungs but are more common in the periphery. A high yield fact for carcinoid tumors is that they can secrete serotonin, which leads to increased peristalsis and diarrhea, facial flushing, and wheezing due to bronchoconstriction.