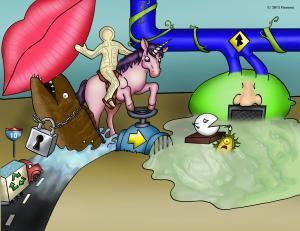 “Lymph” means “clear water” in Latin, and it describes the fluid that flows through the lymphatic vessels and lymph nodes which make up the lymphatic system. The three major roles of the lymphatic system - the reason we need it in the first place - are that it returns fluid from the tissues back to the heart, it helps large molecules like hormones and lipids enter the blood, and it helps with immune surveillance to keep infections from running amok.

So, let’s take a closer look at lymph and where it comes from. The blood in the arteries is under a lot of pressure because it needs to reach every little nook and cranny of the body. The arteries branch out into narrower and narrower arteries, and then arterioles, and finally gets to the capillaries - which have walls that are only one cell thick and are slightly porous. Red blood cells are too big to fit through capillary pores, but small proteins like albumin and fluid can make it through. Every day 20 liters of fluid water and protein - seep out of the capillaries and becomes part of the interstitial fluid between cells. About 17 liters gets quickly reabsorbed right back into the capillaries, but that leaves 3 liters of fluid behind in the tissues each day. This 3 liters of fluid needs to find a way back into the blood so that the body’s interstitial fluid volume and blood volume both stay constant over time. That’s where the lymphatic vessels, or lymphatics, come in: they collect excess interstitial fluid and return it to the blood. Once the interstitial fluid is in the lymphatic vessels, it’s called lymph.

Now - you may be wondering how there can be 20 liters of fluid seeping out each day if the blood volume is only 5 liters, but remember that the 5 liters is constantly in motion and that it gets recycled over and over in a single day.

When the pressure in the interstitial space is less than the pressure in the lymphatic capillary, the endothelial minivalves are pushed shut, keeping the lymph inside. Once the lymph is inside the lymphatic capillaries, it travels through bigger and thicker-walled vessels, then trunks, and then ducts. There’s no pump pushing the lymph through the lymphatic system; instead, smooth muscle in the lymph vessels reacts to the pulsing of nearby arteries by squeezing to get things started, and then the squeezing of skeletal muscles, which normally contract throughout the day, exert external pressure to keep the lymph moving along eventually reaching a nearby lymphatic trunk.

To keep the lymph from sliding backwards, the lymphatic vessels have valves just like the veins. The lymphatic trunks are named after the regions of the body that they drain the lymph from: two lumbar trunks, two bronchomediastinal trunks, two subclavian trunks, and two jugular trunks, as well as one intestinal trunk. From there, the lymph is delivered to either the right lymphatic duct which collects lymph from the right arm and the right side of the head and chest, or the thoracic duct, which is much bigger and collects lymph from the rest of the body. The right lymphatic duct dumps lymph into the junction of the right jugular vein and the right subclavian vein, and the thoracic duct dumps lymph into the same junction on the left side of the body. That particular spot is perfect because it’s where the pressure is very low, making it much easier for the lymph to flow in.

The lymphatic system has key advantages: for example it can pick up larger molecules, like hormones, that are too large to get into the capillaries, and get them into the bloodstream. The lymphatic system can also help get nutrients to the tissues. For example, during a meal, fatty acids get packaged into balls of fat called chylomicrons by the small intestine. But like the hormones, these are too large to move across capillaries. Instead, the chylomicrons go into special lymphatic vessels called lacteals, which get their name from the fact that the lymph that flows through them looks like milk. The chylomicrons slowly make their way up into the thoracic duct and get dumped into the venous blood.