A 16-month-old boy is brought by his parents to the pediatrician’s office to establish care. The patient’s family recently immigrated from Eastern Europe, and medical records are not available. The mother notes that the patient has not been growing as quickly as his siblings grew. In the office, the patient’s temperature is 37.5°C (99.5°F), blood pressure is 105/62 mmHg, pulse is 100/min, and respirations are 28/min. Physical exam reveals hyperpigmented spots on the patient’s body and hypoplastic thumbs. The patient’s height, weight, and head circumference are below the 3rd percentile. Laboratory testing reveals the following results:

The patient’s condition is most likely due to a defect involving which of the following processes?
Memory Anchors and Partner Content 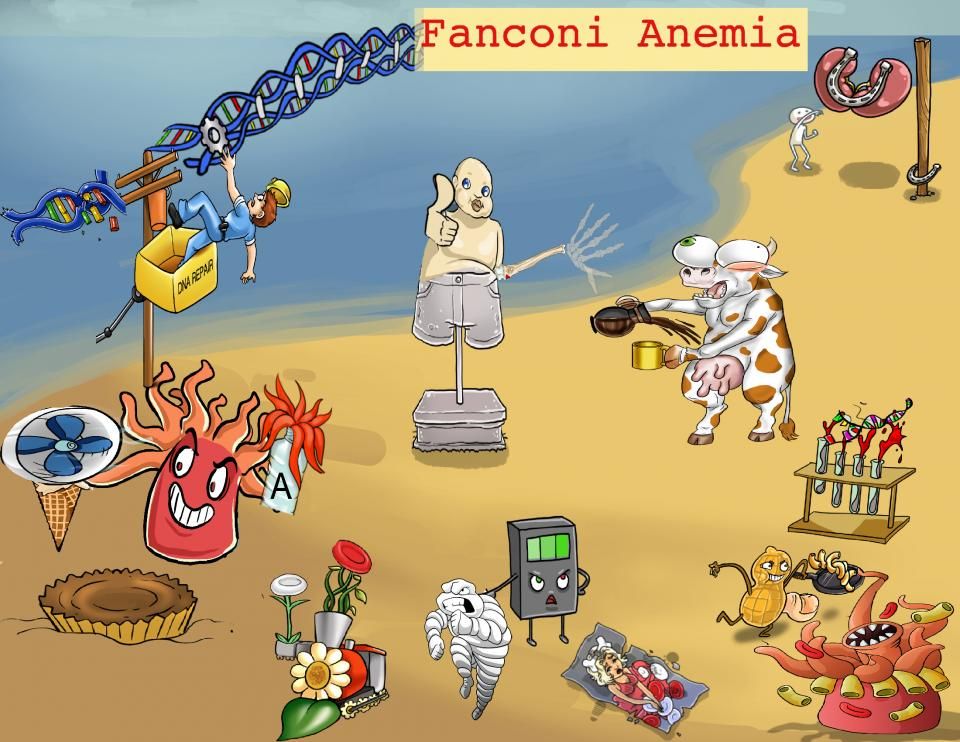 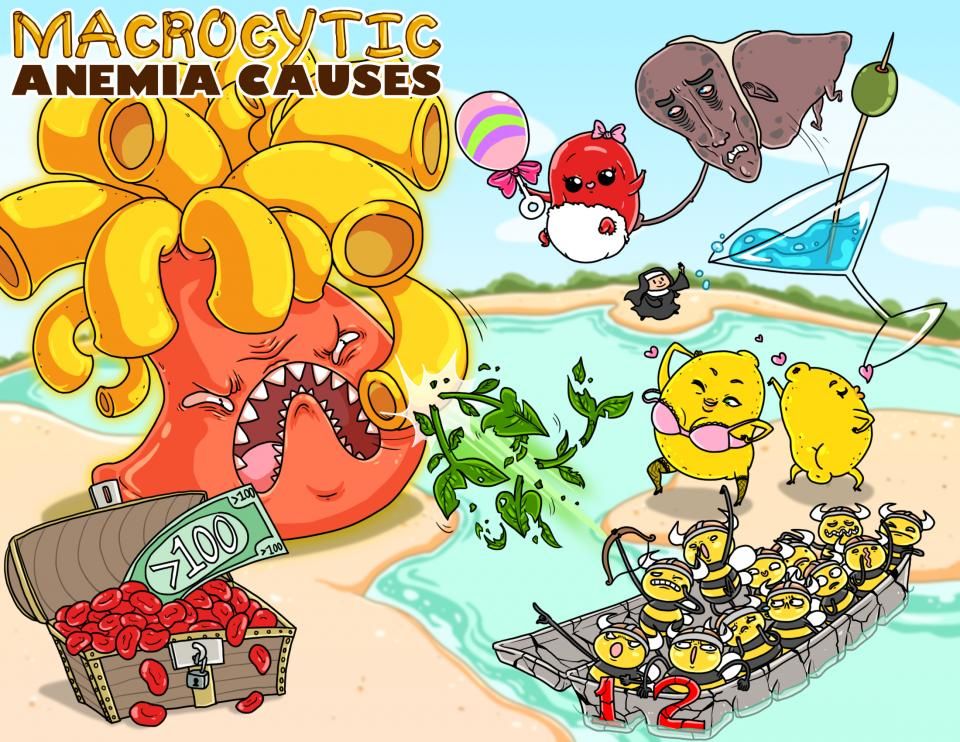 In the hematology ward, two people came in with the same symptoms: easy fatigability, exertional dyspnea, and weight loss. One of them is a 65 year old caucasian individual named Bobby, and the other one is a 50 year old Hispanic individual named Sara. Bobby complains of frequent falls, while Sara admits she is a chronic user of alcohol. Their lab tests show decreased hemoglobin levels.

Both Bobby and Sara are suffering from anemia, which is defined as lower than average levels of hemoglobin, typically below 13.5 g/dL in adult men and below 12.0 g/dL in adult women. Now, anemias can be broadly grouped into 3 categories based on mean corpuscular volume, or MCV, which reflects the volume of a Red Blood Cell or RBC. So microcytic anemia is where the MCV is lower than 80 fL, normocytic, with an MCV between 80 and 100 fL, and macrocytic, with an MCV larger than 100 fL. Now, let’s focus on the macrocytic anemias. The two most common causes are vitamin B12 deficiency and folate deficiency. Orotic aciduria, Fanconi anemia, Diamond-Blackfan anemia are also macrocytic. Finally, liver diseases and hypothyroidism can also cause this type of anemia, but their mechanisms are not well understood.

Okay! Macrocytic anemias can be classified based on the presence of megaloblasts. These are large, immature red blood cells produced when the cytoplasm develops normally, but the DNA synthesis is impaired and cell division is delayed. So when there’s defective DNA synthesis or defective DNA repair like in folate deficiency, vitamin B12 deficiency, orotic aciduria, and Fanconi anemia there’s megaloblastic macrocytic anemia. Megaloblastic anemia can also affect white blood cell production, so the bone marrow starts releasing large, immature neutrophils, with hypersegmented nuclei, meaning their nucleus has more than 5 lobes. These are called hypersegmented neutrophils and are a key finding on the peripheral blood smear of individuals suffering from megaloblastic anemia.

Okay, so let’s take a closer look at these different anemias, starting with vitamin B12, or cobalamin, deficiency. One cause is decreased dietary intake because vitamin B12 is found in animal and dairy products such as eggs, meat or milk, so it’s often seen in vegans who don’t take vitamin supplements. An important fact is that large quantities of B12 are stored in the liver, so it could take years for decreased dietary intake symptoms to develop.

For your exams, it’s important to know that the most common cause of vitamin B12 deficiency is defective absorption, and you need to know the different ways this could happen. One cause is gastric atrophy, now, normally, dairy and animal products are broken down in the stomach by pepsin, which releases B12. For this to happen, the stomach must be very acidic inorder to convert pepsinogen into pepsin. Now, in gastric atrophy, there’s a decrease of hydrochloric acid production in the stomach, which leads to decreased acidity and prevents the release of vitamin B12. Gastric bypass is another potential cause since food passes through the stomach too quickly, and not enough B12 is released.

Also, any terminal ileal diseases, like inflammatory bowel disease or ileal resection, can damage the enterocytes, and prevent absorption. Finally, infections, like Diphyllobothrium latum, or fish tapeworm, and bacterial overgrowth in the ileum also interfere with absorption, leading to vitamin B12 deficiency.

Now, vitamin B12 is used to synthesize DNA precursors, which is essential for cell division. When B12 levels are low or absent, cell division is impaired, so rapidly dividing cells, like those in the bone marrow, are the most affected. This includes precursors for platelets, and both red and white blood cells, leading to thrombocytopenia, anemia, and possibly to leukopenia. When all three blood cell lines are affected, it’s called pancytopenia.

Okay, moving onto folate, or vitamin B9 deficiency, which can be caused by decreased dietary intake, increased demand, or impaired absorption. Main sources of Vitamin B9 include, leafy greens, and citrus fruits like oranges and lemons. Now, folic acid present in these foods are generally in the polyglutamate form which is almost non-absorbable. So, special enzymes in the jejunal mucosa, like the intestinal conjugase, cut down the polyglutamate residues into monoglutamate which can be absorbed. Once inside the enterocytes of the jejunum, an enzyme called dihydrofolate reductase convert it into tetrahydrofolic acid, or THF, which then goes into the portal circulation

Now, the liver also stores some vitamin B9 along with vitamin B12, but only enough vitamin B9 for a few months, while there’s enough B12 stored for years. So, for your exams remember that an individual with a folate-deficient diet will experience symptoms more rapidly than B12 deficiency.