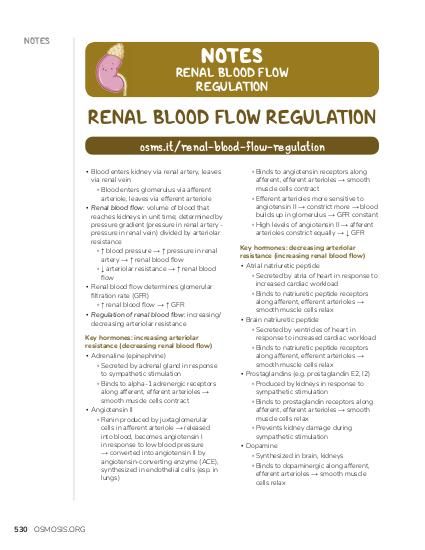 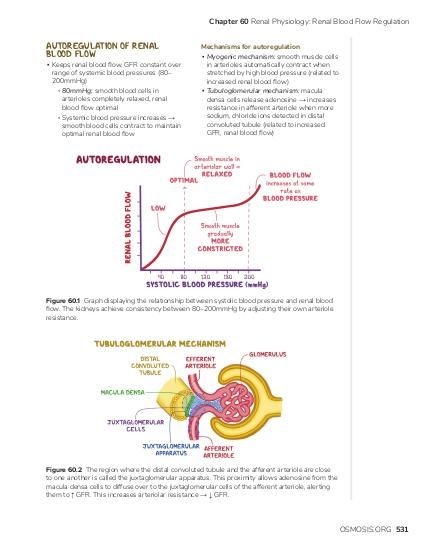 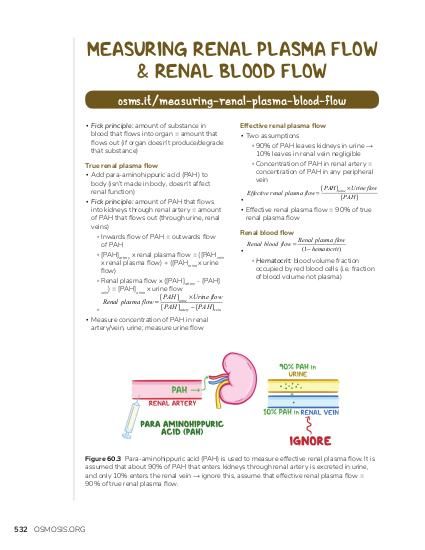 Renal blood flow refers to the amount of blood that the kidneys receive over a period of time.

Blood gets to the kidneys through the renal artery.

Blood from the renal artery flows into smaller and smaller arteries, eventually forming the tiniest of arterioles called the afferent arterioles.

After the afferent arteriole, blood moves into a tiny capillary bed called the glomerulus. The glomerulus is part of the functional unit of the kidney, called the nephron.

Interestingly, once the blood leaves the glomerulus, it does not enter into venules. Instead the glomerulus funnels blood into efferent arterioles which divide into capillaries a second time. These capillaries are called peritubular capillaries - because they are arranged around the renal tubule.

So right from the start, what passes through the glomerulus is mostly plasma - which normally makes up about 55% of blood. What is more, the glomerulus only filters about 20% of that plasma in one go. So when all is said and done, of those around 1.25 liters that the heart pumps out every minute, glomerular filtration rate is normally around 125 milliliters. That plasma-derived filtrate then enters the renal tubule.

As filtrate makes its way through the renal tubule, waste and molecules such as ions and water are secreted from the peritubular capillaries into the tubule, and they are also absorbed from the tubule back into the capillaries.

Measuring renal plasma flow is based on the Fick principle - which states that the amount of a substance in the blood that flows into an organ is the amount that must flow out of that organ, assuming that the organ doesn’t produce or degrade the substance. So what goes in equals what comes out, that’s easy enough.

So to measure true renal plasma flow, the amount of plasma that flows into the kidney, we can use para aminohippuric acid - or PAH. That’s because PAH isn’t made in the body, so a known amount of PAH can be injected into the body. PAH is also ideal because it doesn’t alter renal plasma flow in any way.

The amount of PAH entering the kidney per unit time is equal to the concentration of PAH in renal artery blood times renal plasma flow - which is what we want to determine.