Membranous nephropathy is the most common cause of primary nephrotic syndrome in (ethnicity) adults.

A 36-year-old man comes to the clinic because of progressive swelling in all of his limbs for the past month. He initially thought that he had been consuming too many salty foods, but the swelling has worsened despite restricting sodium in his diet. His current medications include ibuprofen for chronic back pain. His temperature is 37.0°C (98.6°F), pulse is 83/min, respirations are 16/min, and blood pressure is 138/86 mm Hg. Physical examination shows a palpable liver edge 2cm below the right costal margin and anasarca. Laboratory blood studies are positive for the presence HBsAg and negative for Anti-HBsAg. Urinalysis shows 4+ protein and a follow-up 24-hour urine collection shows a loss of 4.1g of protein. A kidney biopsy is performed and shows thickened capillaries and glomerular basement membrane on light microscopy with subepithelial deposits seen on electron microscopy. Which of the following is the most likely diagnosis? 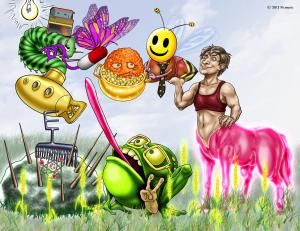 Membranous glomerulonephritis, also known as membranous nephropathy, is where the glomerular basement membrane, or GBM, which lines the glomeruli in the kidney, becomes inflamed and damaged, which results in increased permeability and proteins being able to filter through into the urine, causing nephrotic syndrome.

Finally, it’s thought that as a result of either losing albumin or losing some protein or proteins that inhibit the synthesis of lipids, or fat, you get increased levels of lipid in the blood, called hyperlipidemia.

Just like the proteins, these lipids can also get into the urine, causing hyperlipiduria.

Alright, so with membranous glomerulonephritis, the basement membrane becomes damaged which causes nephrotic syndrome. How does this happen, though? Well, ultimately this damage is caused by immune complexes—complexes composed of an antigen with an antibody bound to it.

One way these complexes can form is as a result of autoantibodies directly targeting the glomerular basement membrane.

Two major antigen targets that’ve been identified are the M-type phospholipase A2 receptor and neutral endopeptidase, which are both expressed on the podocyte surface—the cells that line the basement membrane, and we know this because a large proportion of cases, people with membranous glomerulonephritis have antibodies against these autoantigens in their bloodstream.

Immune complexes, though, might also form outside of the kidney, and then get carried through the bloodstream to the glomerulus and deposit in the basement membrane.

One potential circulating antigen that’s been identified is cationic bovine serum albumin, which is present in cow’s milk and beef protein, and can escape the intestinal barrier, cause immune complex formation, and deposit in the GBM.

Whether they bind directly to the GBM, or come from somewhere else, these immune complexes are called subepithelial deposits because they’re sandwiched right between the epithelial cells or podocytes, and the GBM.