A 26-year-old man comes to the office because of severe right knee pain and swelling. The patient currently works as a professional soccer player. His medical history is noncontributory. When asking the patient about his injury, he remembers jumping up to head the ball and colliding with someone in the air to finally land on his right knee. The patient additionally mentions that the pain worsens when he tries to bend his knee and he hears it "click" occasionally. Physical exam shows a "popping sound" on external rotation of his knee, limited knee extension, and tenderness to palpation. His temperature is 36.7°C (97.9°F), pulse is 57/min, respirations are 19/min, blood pressure is 110/60 mmHg. A knee MRI shows a high intrameniscal signal extending to the articular surface.  Which of the following is the most likely diagnosis? 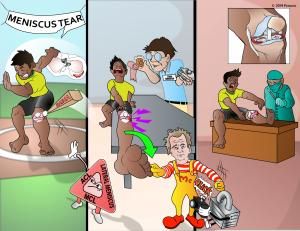 The menisci are crescent-shaped fibrocartilage cushions found in the knee joint.

Normally, there’s the medial and lateral menisci between the femur and the tibia.

So, a meniscus tear, more commonly known as torn knee cartilage, is when one of the menisci of the knee is torn.

This usually occurs due to trauma during contact sports.

The knee is a complex joint, actually it’s a combination of three joints.

These are the femoropatellar joint, between the femur and patella, and the two tibiofemoral joints which are formed by the bony prominences, also called the condyles of the tibia and the femur.

Between the femoral and tibial condyles, there’re the medial and lateral menisci.

The menisci act to absorb compressive force, which can reach up to three times the body weight while walking!

In addition, the menisci have a cup-shaped surface which provides a deeper place for the condyles to fit in improving joint’s stability.

Next, the knee joint is supported by a number of ligaments.

The MCL is firmly attached to the medial meniscus, which makes it less mobile compared to the lateral meniscus.

A meniscus tear can occur when the meniscus is violently compressed, called an acute tear, which usually occurs in young athletes.

Acute tears typically occur when the knee is bent and at the same time excessively twisted, like when you’re playing basketball and then you suddenly change direction, trying to crossover another player.

Acute meniscus tears can also occur as a part of the unhappy triad injury.

This is where a lateral force to the knee, like when the knee is hit by a hockey puck, causes tears in the ACL, MCL and one of the menisci.

Now, regarding which of the menisci, it’s worth mentioning that even though the classic “unhappy triad” consists of the ACL, MCL and medial meniscus tears, the lateral meniscus is more commonly injured than the medial.

This is because when the knee is affected by a blow from the lateral side, the lateral meniscus gets compressed between the tibia and the femur, leading to injury.

In contrast to an acute tear, there are also chronic tears, which usually occur in older people.

This is because the wear and tear of the menisci make them more susceptible to tears with minimal force, or any noticeable trauma.

An elderly person might tear their meniscus from simply getting up from a chair.