A 10-year-old girl comes to the office because of progressively worsening intellectual disability and motor skills. Her parents report that she has had difficulty walking and exhibited decreased physical activity. Neurological examination shows ataxia, hyperreflexia, and peripheral neuropathy. Funduscopic examination shows no abnormalities. A magnetic resonance imaging (MRI) scan is obtained and shows bilateral white matter lesions along the edges of the lateral ventricles. Which of the following enzyme deficiencies is most likely to be present? 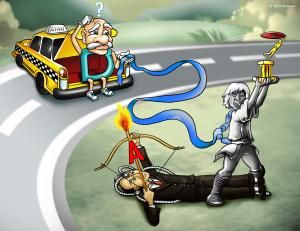 Metachromatic leukodystrophy, or MLD, is a rare lysosomal storage disorder that results from mutations in the ARSA gene, which codes for arylsulfatase A - an enzyme that normally breaks down a fat called sulfatide.

Without this enzyme, sulfatide accumulates in neurons and myelin-producing cells like Schwann cells and oligodendrocytes, resulting in their degeneration.

MLD is an autosomal recessive disorder, which means that two mutated copies of the gene, one from each parent, are needed to develop the disease.

In rare cases, MLD can also be caused by mutations in the PSAP gene, which codes for saposin B, which is a protein that activates arylsulfatase A.

The sulfatide accumulates within cells of the nervous system like Schwann cells and oligodendrocytes, and aggregates to forms intracellular granules.

These sulfatide aggregates are called metachromatic since they appear differently colored than the cellular material when stained and seen under the microscope.

Sulfatide granules interferes with the cells’ ability to produce myelin, resulting in demyelination, or loss of myelin sheath, of the neurons.

Demyelination in MLD occurs both in the central as well as peripheral nervous system, resulting in a variety of symptoms.

Common symptoms include peripheral neuropathy, which is the loss of sensation in the extremities, diminished deep tendon reflexes, visual disturbances, difficulty in speaking, difficulty in walking, ataxia, behavior and personality changes, and seizures.

In the juvenile form, symptoms usually develop between the age of 4 and adolescence, which is around 12- 14 years of age, and include behavioral changes and decreased ability in school.

In the adult form, symptoms usually develop after the age of 16, and include memory loss and psychosis.