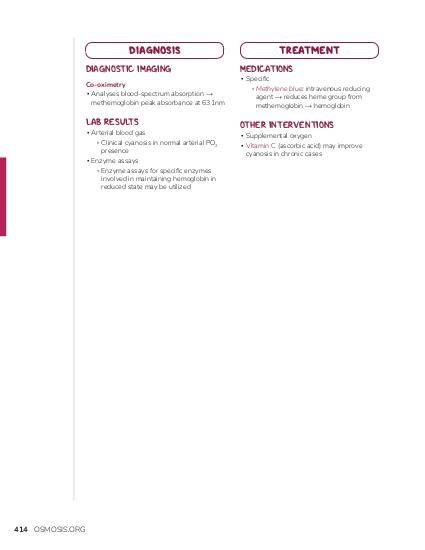 A 1-year-old male infant comes to the pediatric emergency department because of sudden "grayness" 30 minutes ago. The patient's mother says that the infant has been crying all morning because she believed he was in pain from teething. She applied a topical numbing gel to his teeth about an hour ago which appeared to work until his skin started changing color. Physical examination shows an infant in moderate distress with generalized cyanosis and normal breathing. Which of the following cation level elevations is the most likely cause of the patient's symptoms?

Methemoglobinemia is a disorder characterized by elevated levels of methemoglobin in the blood, which leads to tissue hypoxia.

Normally, our red blood cells are loaded with millions of copies of a protein called hemoglobin.

Each hemoglobin protein is made of four globin subunits, each with an iron containing heme group.

Oxygen can bind to the iron molecule, so each hemoglobin molecule can bind four molecules of oxygen.

The iron molecules, called ferrum in latin, are usually in the ferrous state, which means that the iron atom has lost two electrons to form Fe2+.

Now, methemoglobin is an oxidized form of hemoglobin, and is normally spontaneously formed in our blood in small amounts.

In methemoglobin, one of the iron molecules is in the ferric state, which means that the iron atom has lost three electrons, instead of two, to form Fe3+.

The heme with the Fe3+ is like the lazy co-worker with a decreased ability to bind oxygen.

The other three heme groups still have iron in the Fe2+ state, and they try to compensate for the slacker by binding to oxygen more tightly.

However, this ends up being more harmful than helpful, as it prevents them from releasing oxygen to the tissues.

Too much methemoglobin can eventually lead to tissue hypoxia, so in order to protect ourselves, we have a few enzyme systems that convert methemoglobin to normal hemoglobin.

The most important one is cytochrome b5 reductase, also known as methemoglobin reductase, because it uses a NADH as a reducing agent to donate electrons to an iron in the Fe3+ state and reduces it to the Fe2+ state. So it’s like the boss that comes by to make the lazy heme productive again.

This enzyme is found in red blood cells and other cells like neutrophils, and helps to keep the level of methemoglobin in our blood very low, approximately 1% of total hemoglobin.

OK, but if the function of these enzyme systems is disrupted, methemoglobin levels get higher than normal, and we call this condition methemoglobinemia.

Methemoglobinemia can be congenital or acquired.

In congenital methemoglobinemia, there’s a problem with the synthesis of cytochrome b5 reductase.

Two main types of congenital methemoglobinemia exist and both are inherited in an autosomal recessive pattern.

In type I, which is the most common type, cytochrome b5 reductase is absent only in red blood cells, and methemoglobin levels typically range from 10-35%.

Type II methemoglobinemia is much more severe because cytochrome b5 reductase is absent in every cell in the body, and methemoglobin levels are much higher than 35%.

Now, acquired methemoglobinemia is much more common than the congenital form.

They are caused by exposure to certain substances, for example: Local anesthetics like benzocaine; dapsone, which is used for the treatment of leprosy; and nitrates or nitrites. These substances act as oxidants, and therefore increase the production of the oxidized form of hemoglobin, or methemoglobin.

This excessive production of methemoglobin can overwhelm cytochrome b5 reductase and the other enzyme systems that normally reduce methemoglobin.

Summary
Methemoglobinemia is a disorder characterized by the presence of a higher than normal level of methemoglobin (ferric [Fe3+] rather than ferrous [Fe2+] haemoglobin) in the blood. Methemoglobin is a form of hemoglobin that contains ferric [Fe3+] iron and has a decreased ability to bind oxygen. However, the ferrous iron has an increased affinity for bound oxygen. The binding of oxygen to methemoglobin results in an increased affinity of oxygen to the three other heme sites (that are still ferrous) within the same tetrameric hemoglobin unit. This leads to an overall reduced ability of the red blood cell to release oxygen to tissues, with the associated oxygen–hemoglobin dissociation curve therefore shifted to the left. When methemoglobin concentration is elevated in red blood cells, tissue hypoxia can occur.
Sources
Feedback