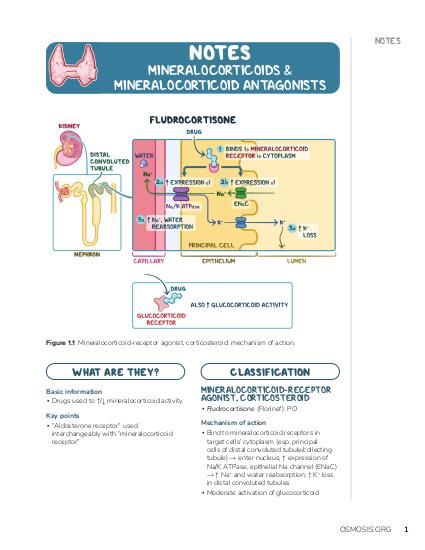 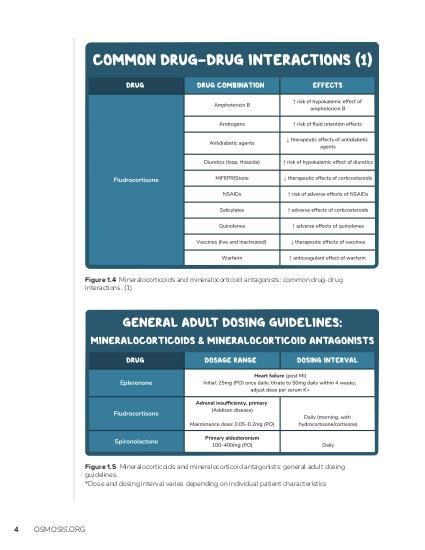 With mineralocorticoids, “corticoids” refers to the steroid hormones produced by the adrenal cortex, and “mineral” refers to how these hormones regulate sodium reabsorption and potassium excretion in the distal convoluted and collecting tubules of the kidney.

Aldosterone is part of a hormone family, or axis, that works together and is called the renin-angiotensin-aldosterone system.

Normally, when the blood pressure is low, the kidney gets less blood, which causes it to release renin into the blood.

Angiotensin II has many effects like causing vasoconstriction and stimulating the release of antidiuretic hormone from the pituitary glands.

In the adrenal glands, it triggers the secretion of aldosterone.

In the kidneys, aldosterone affects two types of cells along the distal convoluted and collecting tubule of the nephron.

This complex is translocated to the nucleus of the cell, where it enhances two types of cells along the distal convoluted and collecting tubule of the nephron.

This complex is translocated to the nucleus of the cell, where it enhances gene expression of epithelial sodium channels (ENaC) and sodium/potassium ion pumps.

Eventually, this leads to their increased synthesis and as a result, there are more of them being present on the principal cell.

Now, epithelial sodium channels are located on the apical membrane and they enable sodium to exit the filtered urine by entering the principal cells.

In addition, sodium/potassium ion pumps, which are located on the basolateral membrane, drive sodium from the cell into the blood, which allows more sodium to flow from the tubule into the cell, down its concentration gradient.

At the same time, the pumps drive potassium in the opposite direction: from the blood into the cells, and from there it flows down its concentration gradient into the tubule to be excreted as urine.

The other function of aldosterone is to stimulate the proton pumps (H+-ATPase pumps) in alpha-intercalated cells, which causes more protons to get excreted into the urine and make it more acidic.

In other words aldosterone causes a decrease in urine pH.

Meanwhile, ion exchangers on the basal surface of the cell move the negatively charged bicarbonate ion into the extracellular space, causing an increase in blood pH.

For example, primary adrenal insufficiency, also known as Addison’s disease, is a rare endocrine disorder that happens when the adrenal gland isn’t able to produce enough of the hormones that the body needs, particularly aldosterone and cortisol.

The reason it’s called “primary” is that the underlying problem is due to damage to the adrenal glands themselves.

Another cause of mineralocorticoid insufficiency is congenital adrenal hyperplasia, a disease where there are enlarged adrenal glands that are present at birth, and the reason for the adrenal enlargement is that there’s a deficiency in an enzyme involved with steroid production.

Because of its long duration of action, approximately 8-12 hours, fludrocortisone is also favored for replacement therapy after adrenalectomy.

Since it causes sodium and water reabsorption, it can be used to treat conditions that are associated with low blood pressure, such as idiopathic orthostatic hypotension and septic shock that is unresponsive to volume resuscitation or vasopressors.

Now, switching gears and moving on to side effects.

Since fludrocortisone causes sodium and water reabsorption individuals on fludrocortisone might end up with fluid retention, hypertension, or even edema, where fluid builds up in the body’s tissues, exacerbating pre-existing heart failure.

Other side effects include increased loss of potassium, or hypokalemia; and hyperglycemia.

It’s important to note that high doses of mineralocorticoid-receptor agonists are associated with myopathy, adrenal suppression, and hypothalamic-pituitary-adrenal axis suppression.

Finally, by stimulating glucocorticoid receptors, these individuals can get iatrogenic Cushing syndrome.

Symptoms include obesity, where the extra adipose tissue tends to build up between the shoulders leading to a buffalo hump; in the trunk, causing truncal obesity; and in the face, causing moon facies.

Hyperglycemia and diabetes often result from the increased gluconeogenesis and insulin resistance.

Muscle weakness and skin stretch marks can occur due to protein breakdown.

Common medications in this group include eplerenone and spironolactone, which are typically taken orally.

These medications compete with aldosterone for receptor sites in distal convoluted tubules, thereby increasing sodium and water loss through the urine.

At the same time they prevent potassium loss, thus, they are also known as potassium-sparing diuretics.

Now, common conditions that are treated with mineralocorticoid-receptor antagonists include hypertension, or high blood pressure, and edematous states like pulmonary edema or ascites, where fluid builds up in the extracellular space.