Anatomy of Muscles of the Back 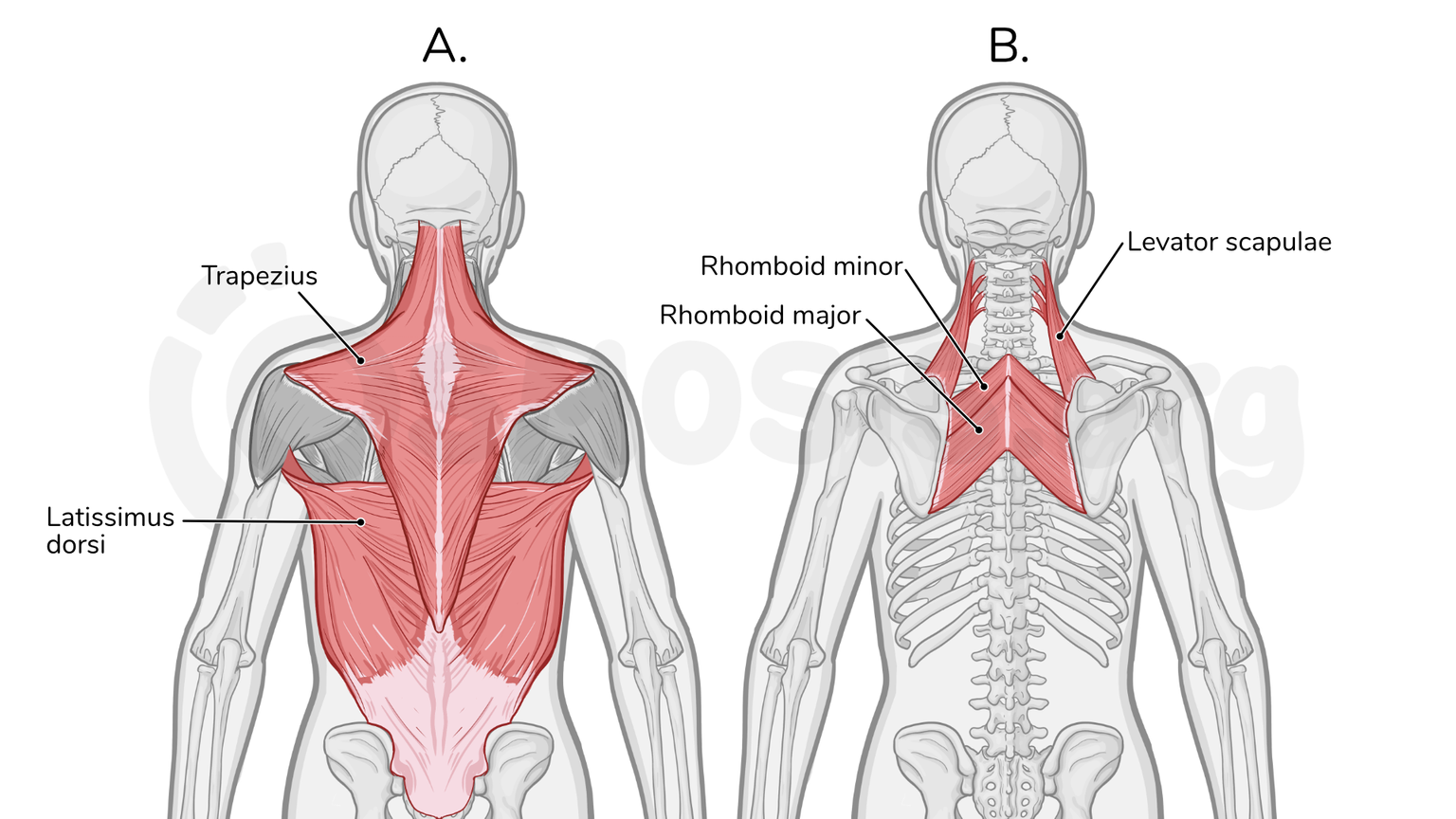 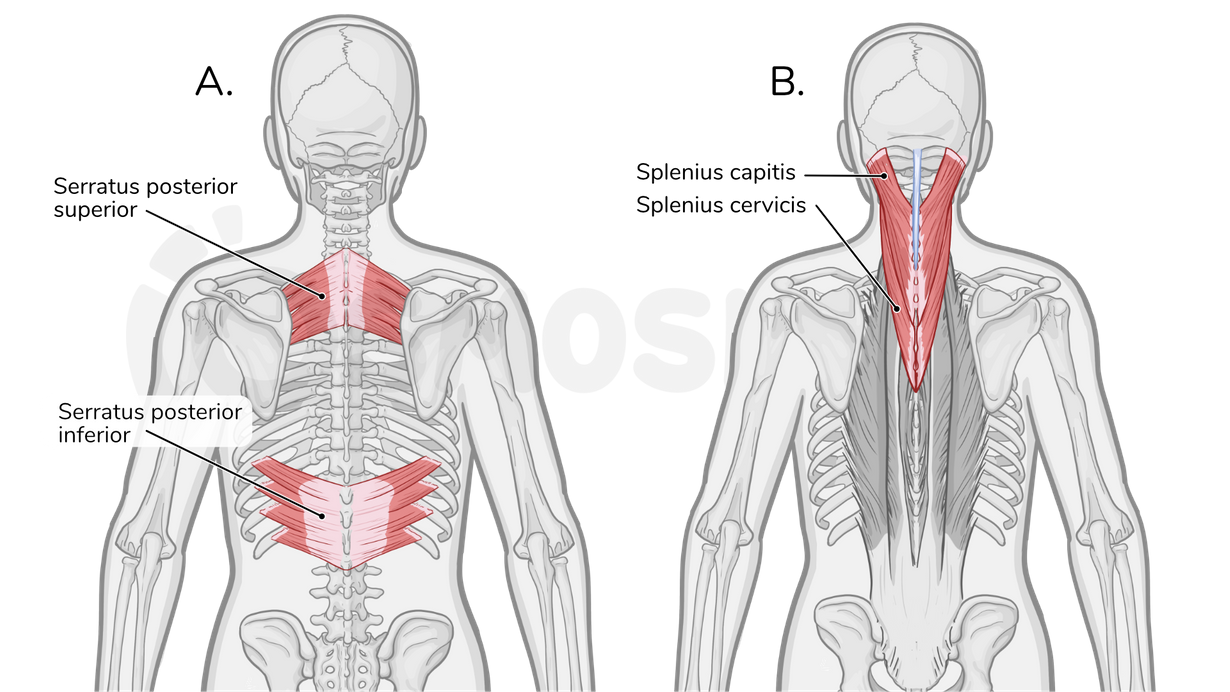 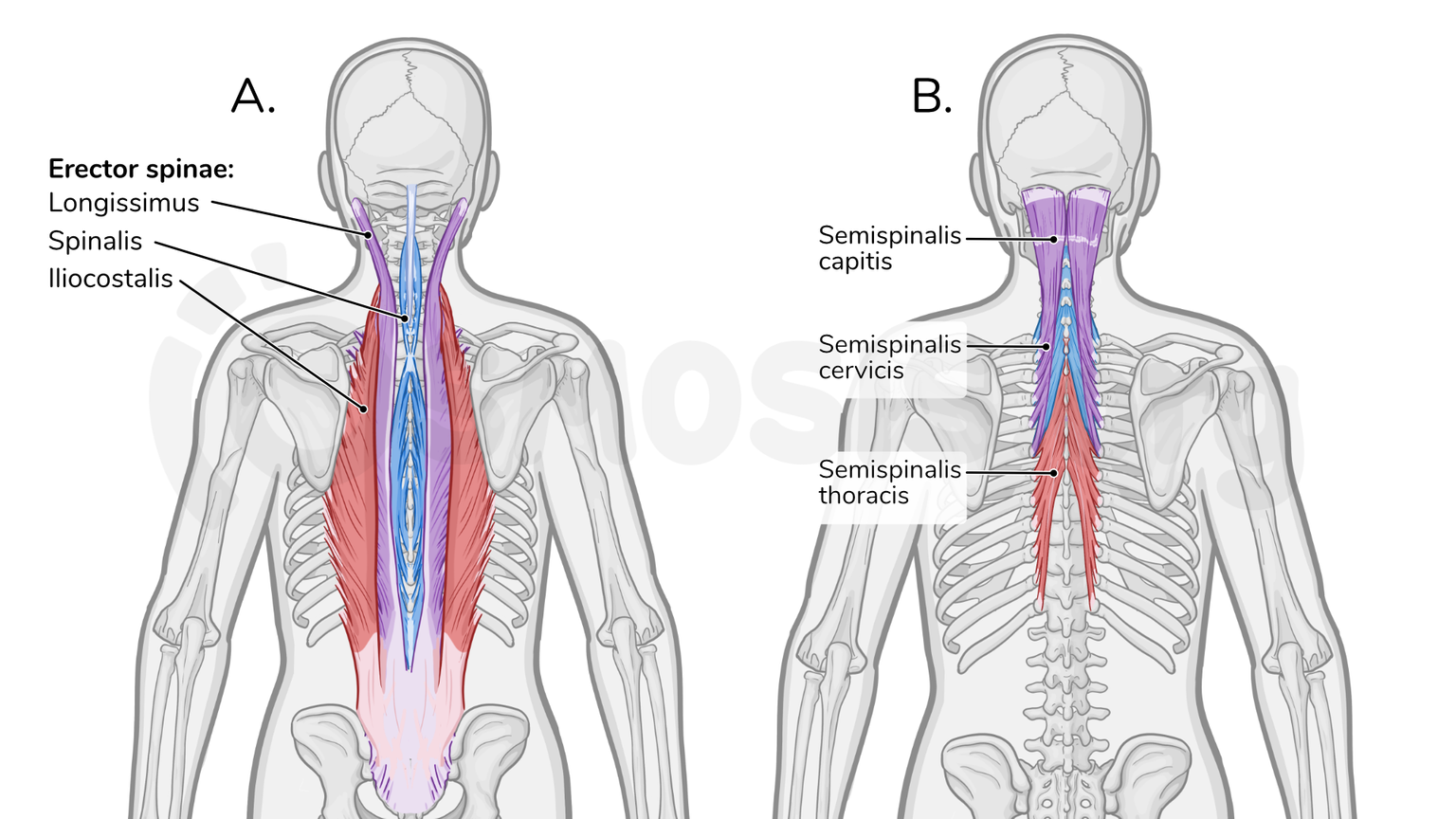 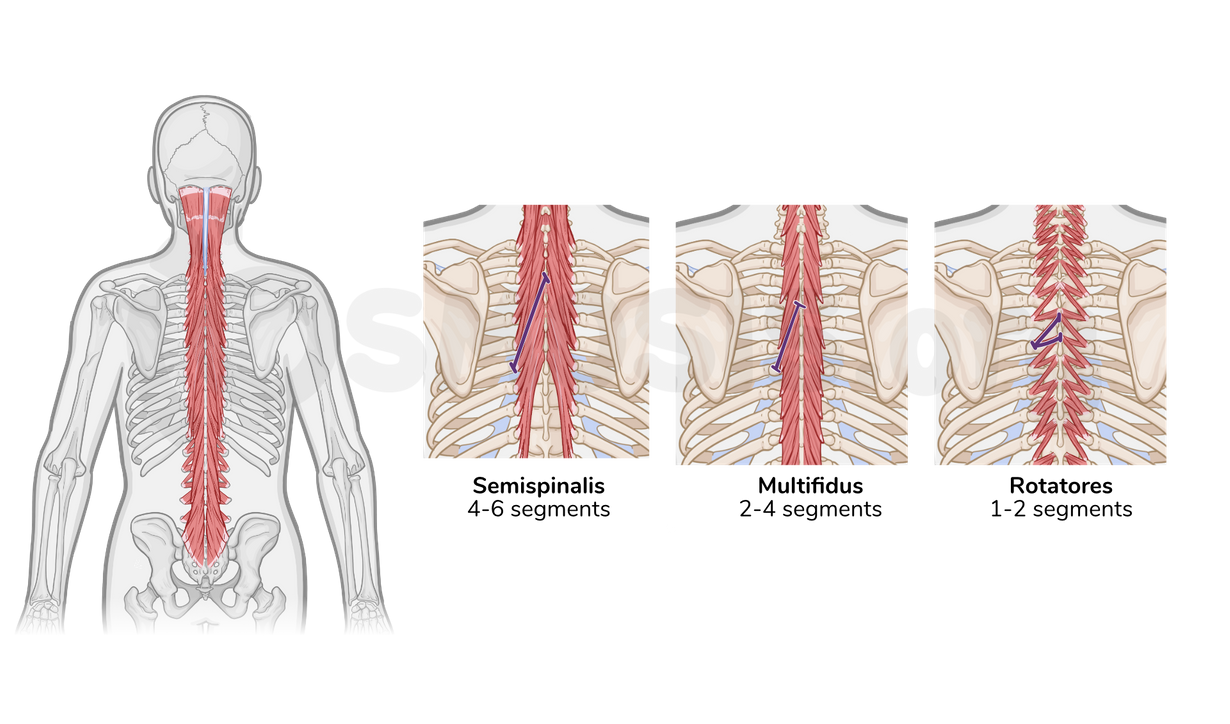 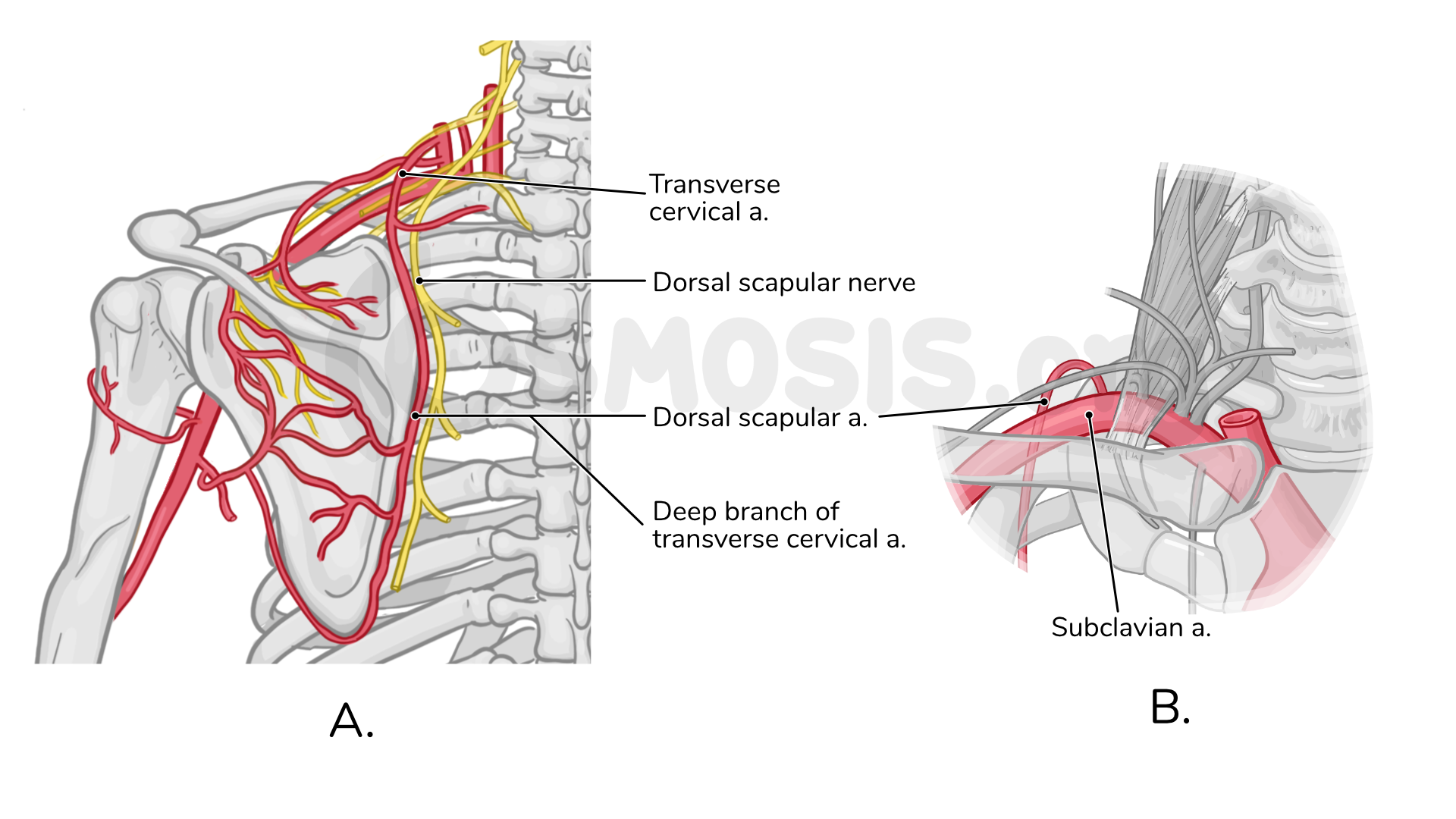 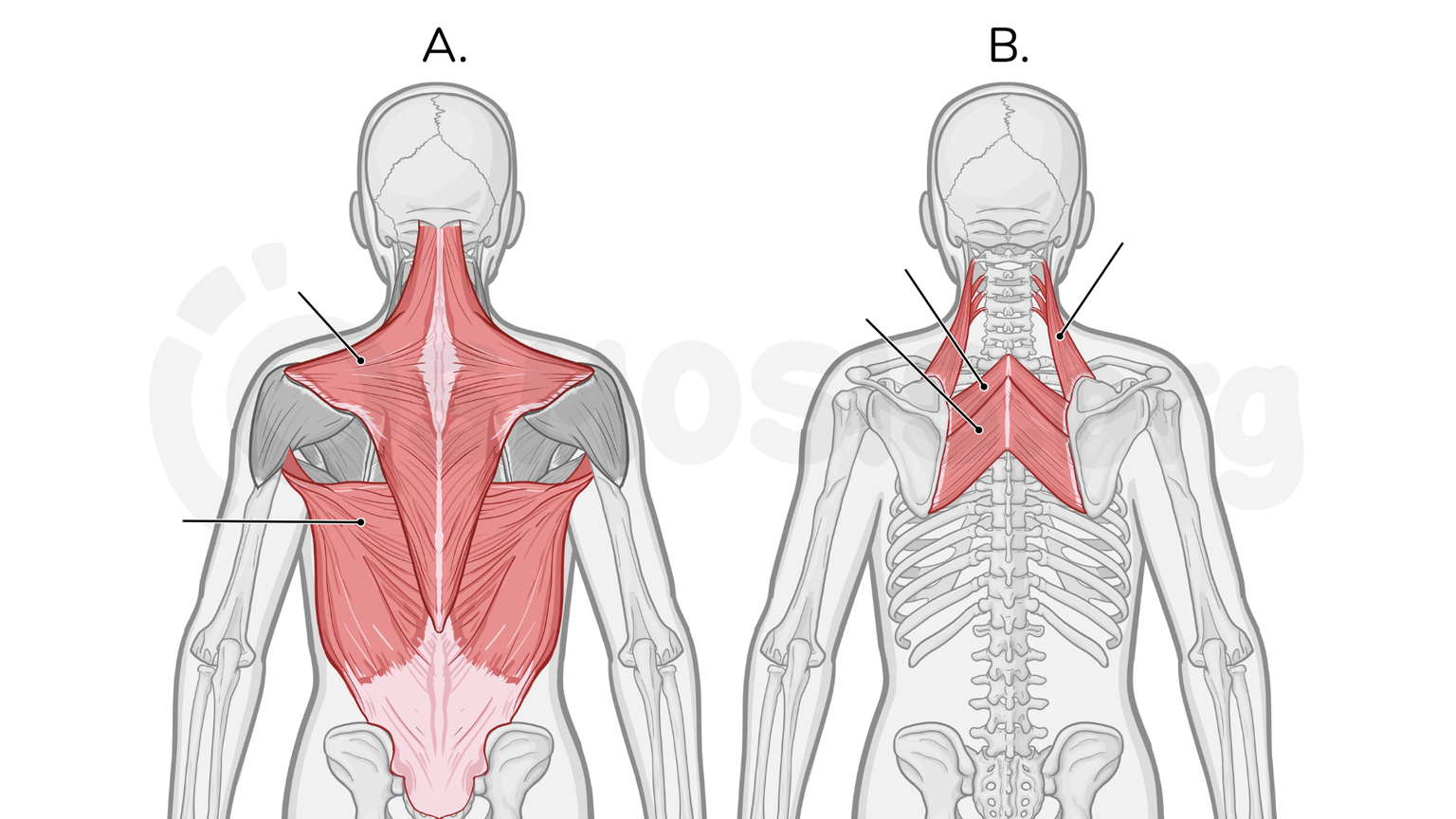 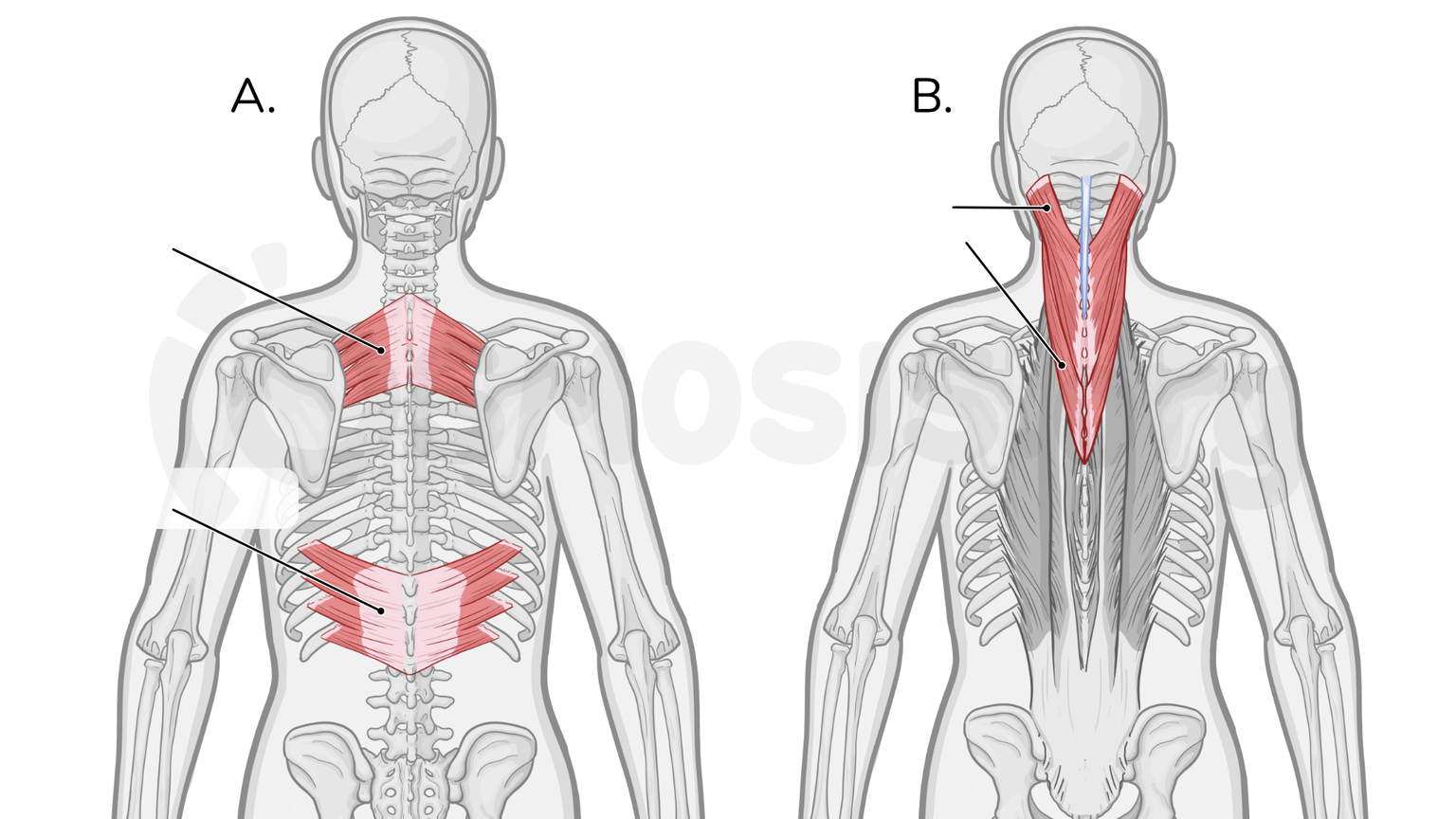 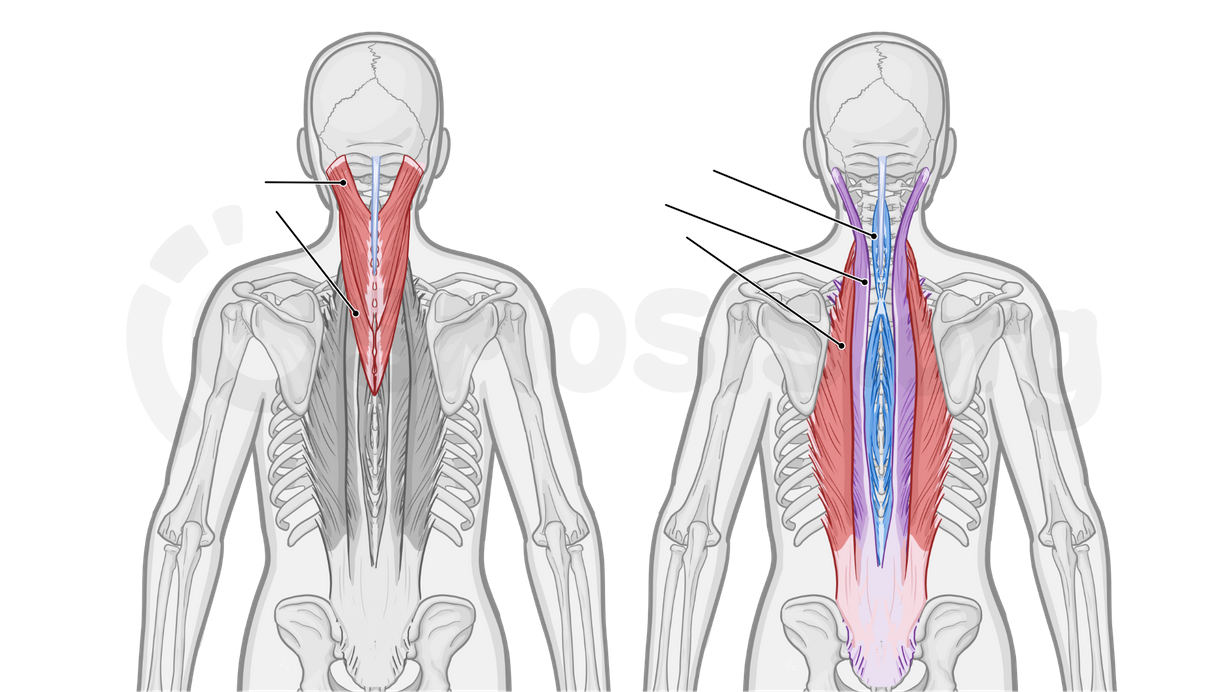 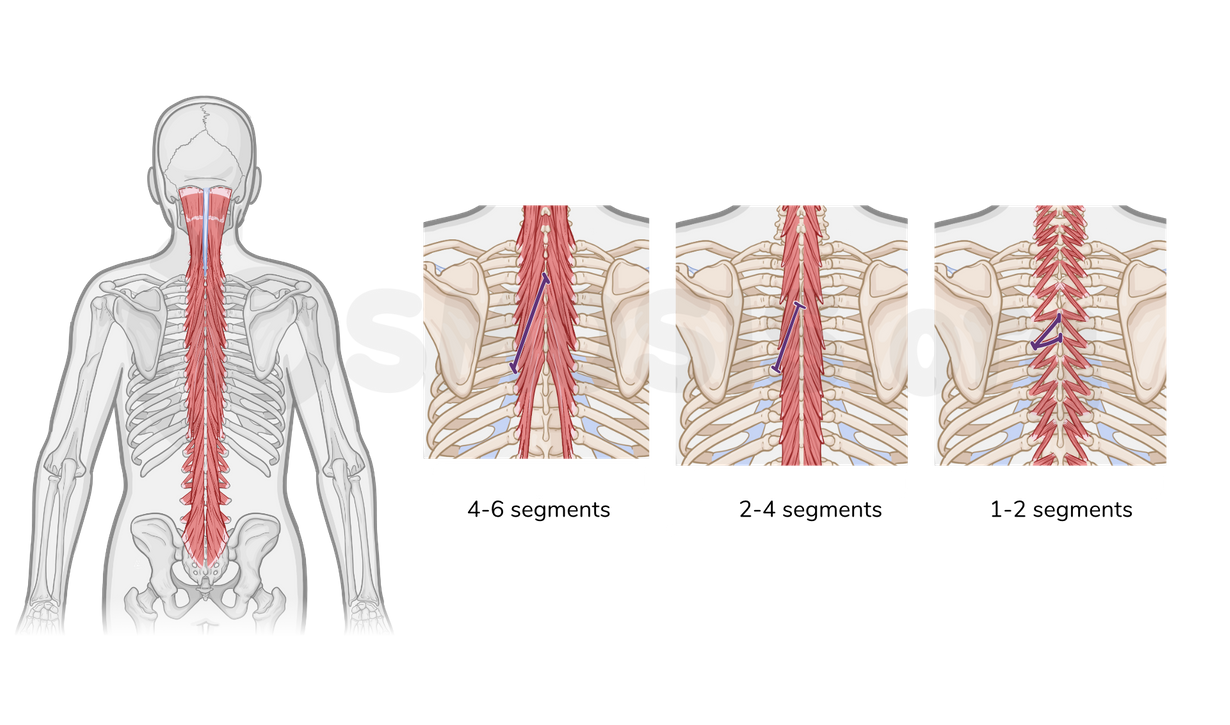 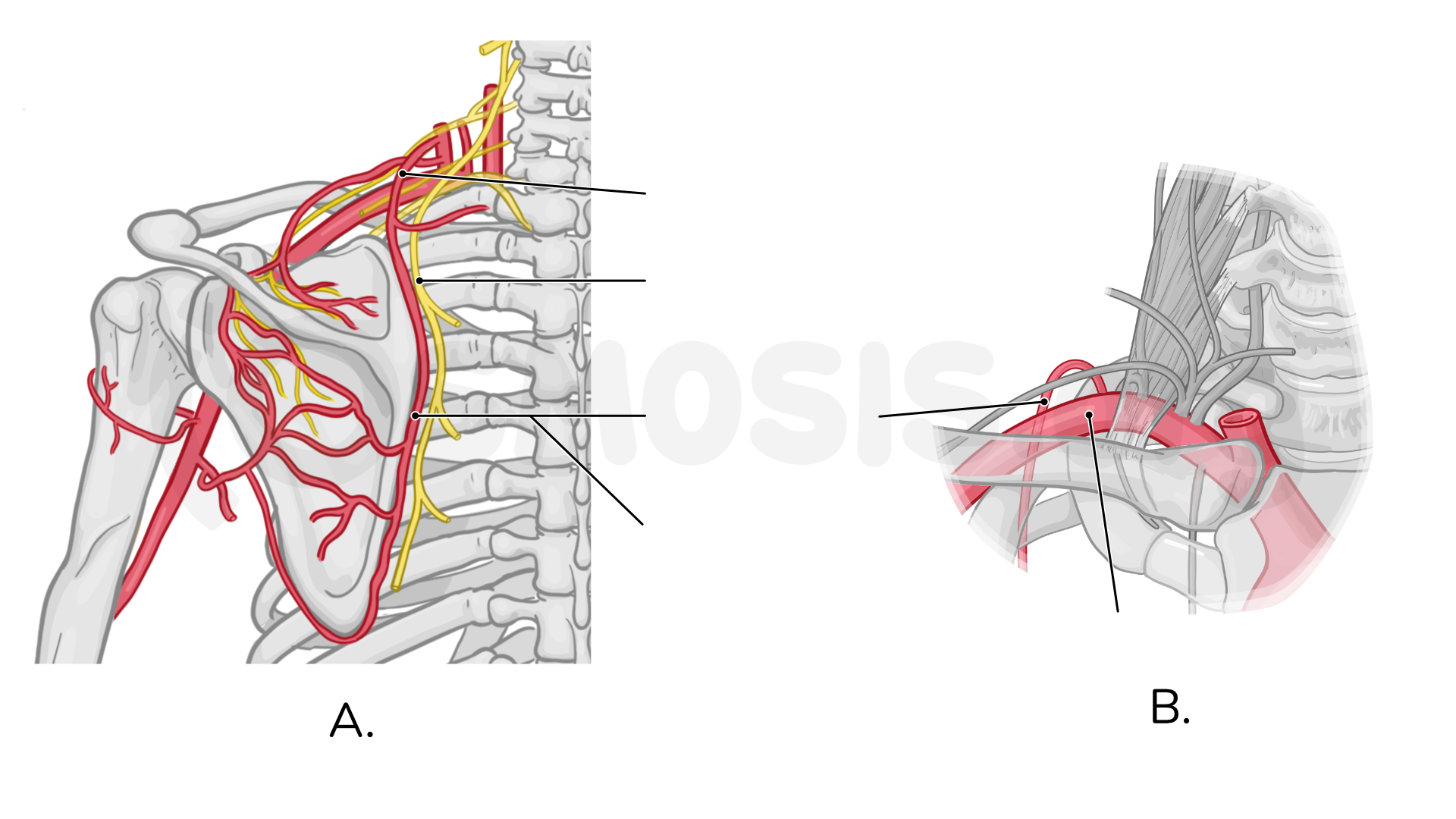 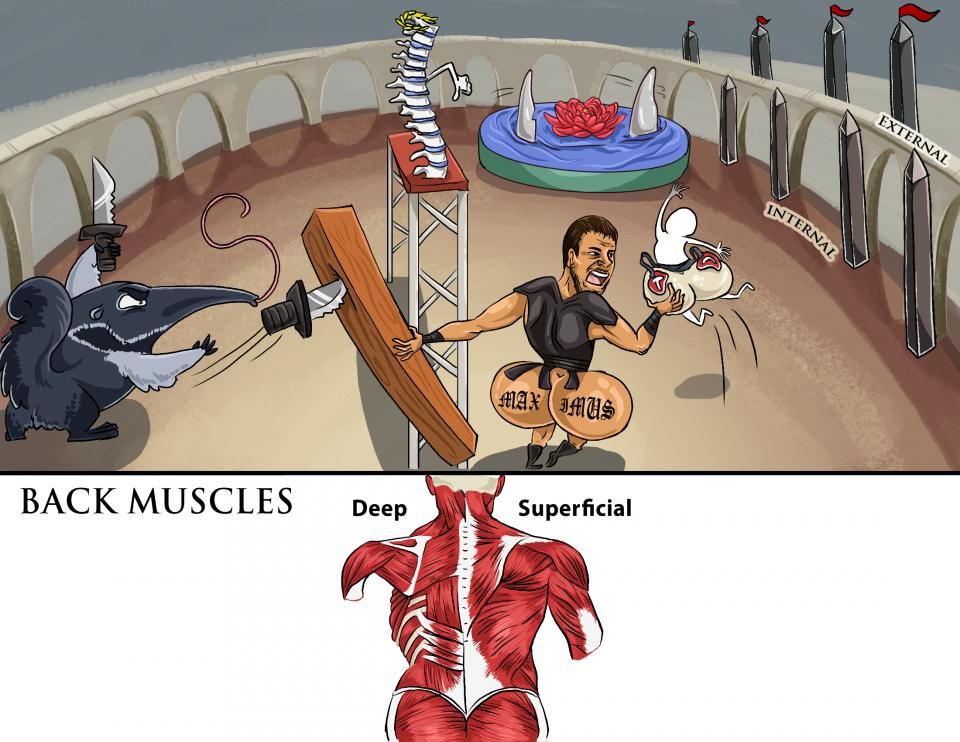 Here at Osmosis, we support each other - we’ve got each other’s backs. And it turns out, our backs support all of us! Let’s look at the muscles of the back that help maintain our posture and also provide movements of the trunk and upper limb.

The superficial extrinsic back muscles include the trapezius, latissimus dorsi, levator scapulae, and the two rhomboids - rhomboid major and rhomboid minor.

All these muscles are posterior axioappendicular muscles, which connect the axial skeleton, primarily the vertebral column, to the superior appendicular skeleton, specifically the pectoral girdle and the humerus.

The posterior axioappendicular group is divided into two subgroups. The first subgroup consists of two superficial muscles: the trapezius and latissimus dorsi.

The trapezius is a large triangular muscle that covers the posterior aspect of the neck and the superior half of the back. There are two trapezius muscles in the back, which when seen together, look like a trapezium.

Proximally, the trapezius originates on the medial third of the superior nuchal line, the external occipital protuberance, the nuchal ligament, and the spinous processes of the C7 to T12 vertebrae.

And finally, when the ascending and descending fibers work together, it results in upward rotation of the scapula which causes the glenoid cavity to tilt superiorly.

The trapezius is innervated by a plexus of nerves formed by the spinal accessory nerve - or cranial nerve 11 - which provides motor innervation to the muscle, as well as by branches from the anterior rami of the C3 and C4 spinal nerves which carry sensory information - specifically pain and proprioception - from the muscle.

The arterial supply for the trapezius is primarily from the superficial branch of the transverse cervical artery, which arises from the thyrocervical trunk. These neurovascular structures travel through the posterior triangle and then along the deep surface of the trapezius muscle.

The contraction of latissimus dorsi extends, adducts and medially rotates the humerus, like when trying to scratch that annoying itch in the middle of your back. In fact, because it is such a powerful extensor and adductor, this muscle is used when pulling yourself up during rock climbing, chin ups, or movements such as swimming or chopping wood.

Okay, next up, we have the deep subgroup of the posterior axioappendicular muscles, consisting of the levator scapulae and the two rhomboids.

The levator scapulae is found in the neck, deep to the sternocleidomastoid and trapezius muscles. Proximally, it originates on the posterior tubercles of the transverse processes of the C1 to C4 vertebrae and then descends to insert on the medial border of the scapula, superior to the spine of the scapula.

“Levator” roughly translates to “lifter”, so when this muscle contracts, it elevates - or ‘lifts’ - the scapula. It also fixes the scapula and holds it in place to resist downward forces like when carrying a heavy piece of luggage up the stairs. It also produces downward rotation of the scapula, causing the glenoid cavity to tilt inferiorly.

Rhomboid minor and major always contract together to produce retraction and downward rotation of the scapula. They also assist the serratus anterior in holding the scapula against the thoracic wall. These movements enable us to forcibly lower the arm, like when driving a stake... but not, like, literally driving a steak.

Regardless of its origin, the artery buddies up with the dorsal scapular nerve, where they travel deep to the levator scapulae, and continue deep to the rhomboids, descending parallel to the medial border of the scapula, supplying all three muscles throughout their course.

Serratus posterior superior originates from the nuchal ligament and the spinous processes of the C7 through T3 vertebrae and inserts on the superior borders of 2nd through 5th ribs. Based on these attachments, it is thought that this muscle acts to elevate these superior ribs during inspiration, and it is innervated by the anterior rami of the T2 to T5 spinal nerves.

The serratus posterior inferior originates from the spinous processes of the T11 through L2 vertebrae and inserts at the inferior borders of the 9th through 12th ribs near their angles. Based on these attachments, it is thought to depress the inferior ribs during inspiration , and it is innervated by the anterior rami of the T9 to T12 spinal nerves.

Although these muscles are often designated as respiratory muscles that cause movement of the ribs, these actions are controversial with many sources suggesting they may function primarily in proprioception by providing sensory information about the position of the vertebral column and ribs.

Let’s take a quick break and try to identify all the extrinsic back muscles.

Now, the intrinsic back muscles - also sometimes called the deep back muscles - are actually innervated by the posterior rami of spinal nerves, and function to maintain posture and control movements of the vertebral column.

They extend from the pelvis to the cranium and are enclosed by deep fascia which attaches medially to the nuchal ligament, the tips of the spinous processes of the vertebrae, the supraspinous ligament, and the median crest of the sacrum. Laterally, this fascia attaches to the cervical and lumbar transverse processes and the angles of the ribs.