Assessments
Muscles of the gluteal region and posterior thigh 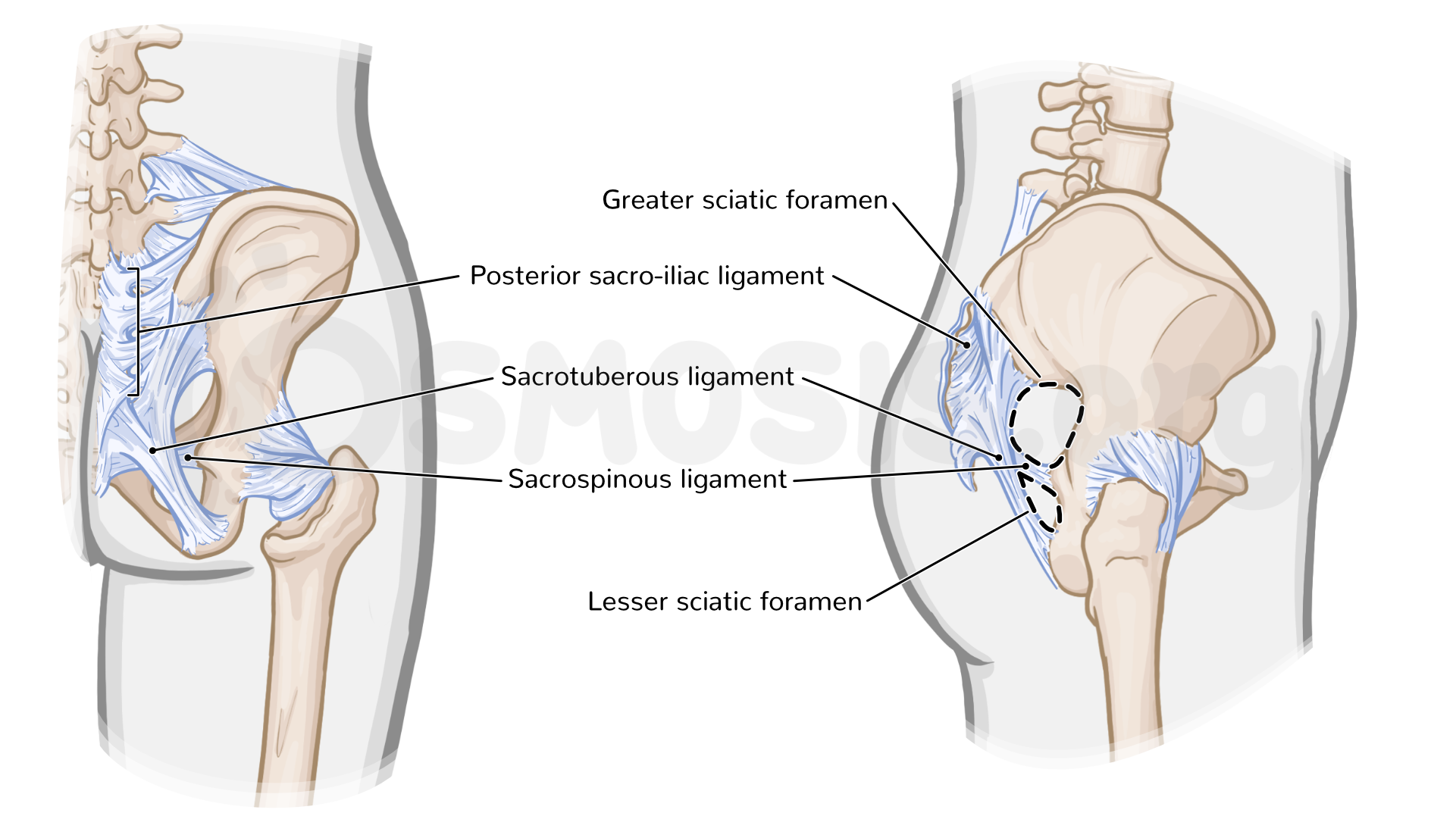 Figure 1: Ligaments of the gluteal region. Figure 2: Contents of the greater and lesser sciatic foramina Figure 3: Superficial muscles of the gluteal region and posterior thigh. A. Posterior view and B. Lateral view 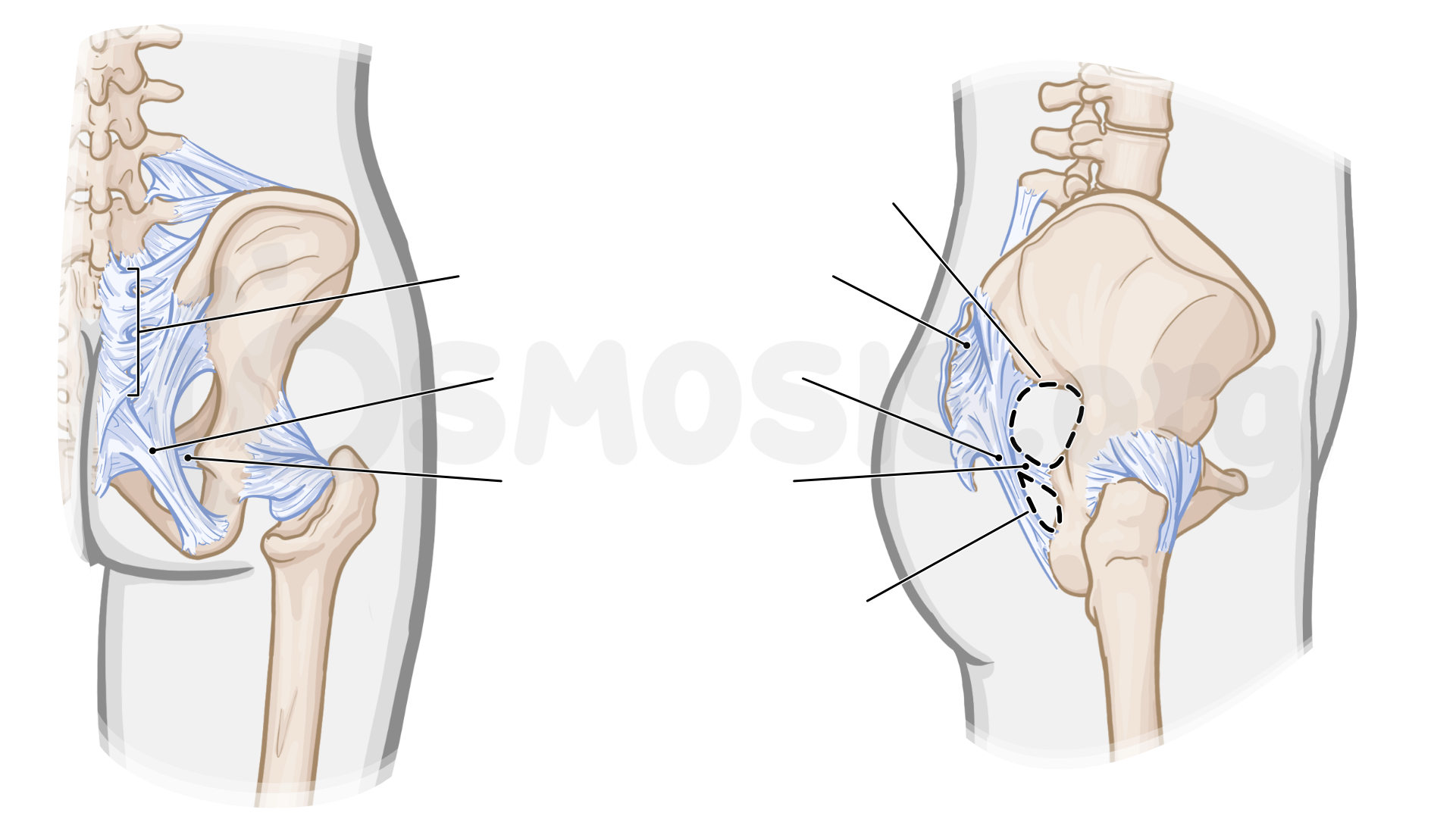 A patient presents with extreme pain in her left gluteal region following a track and field meet earlier that day. Imaging reveals a fracture of her left ischial tuberosity. What action(s) would most directly be affected? 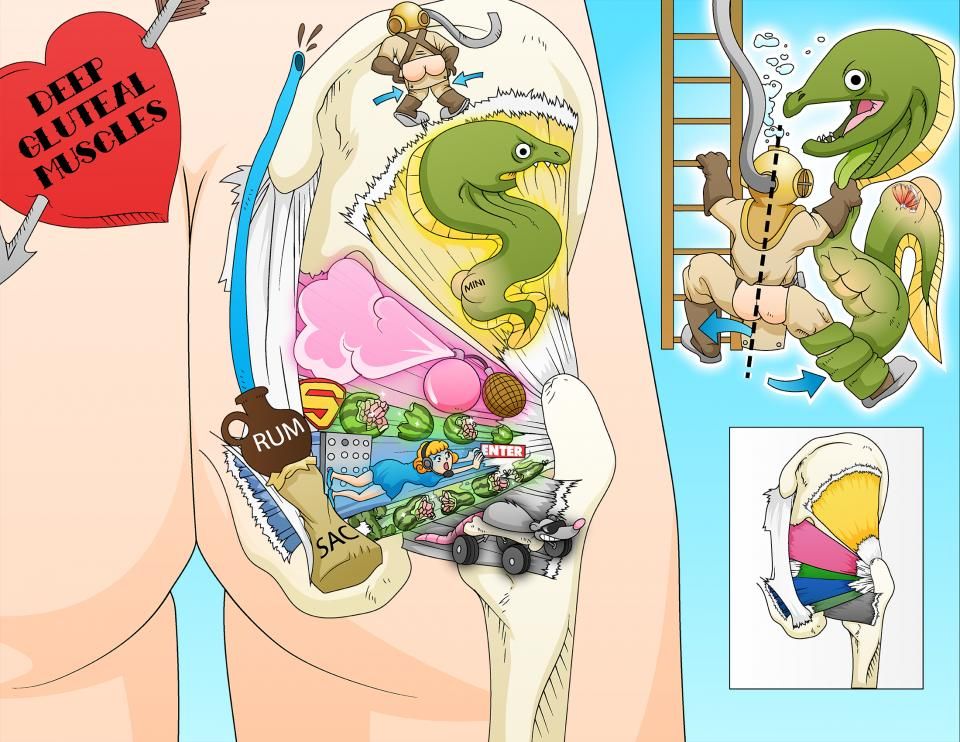 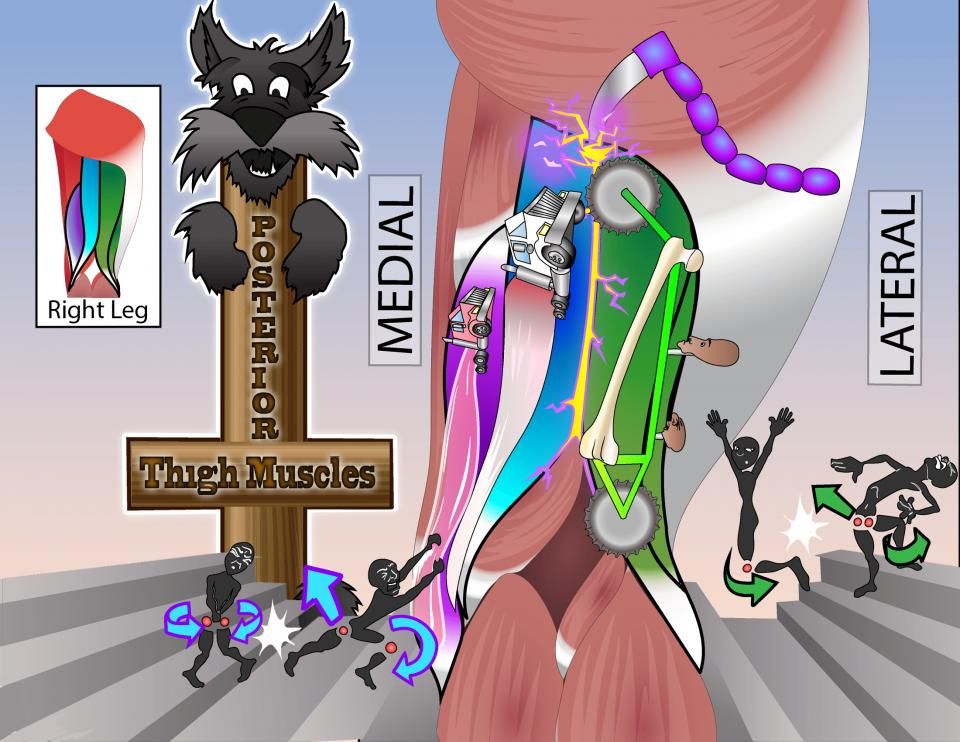 When looking at the lower limb from the posterior view, there are two regions that stand out immediately: the gluteal region and the posterior thigh.

Let’s start with what’s arguably the most popular one of the two and which has been featured in countless pop songs - the gluteal region.

Laterally it overlies the greater trochanter, and anteriorly, it extends up to the anterior superior iliac spine.

It also extends from the iliac crest superiorly to the gluteal fold inferiorly.

The gluteal fold is the crease formed by the inferior aspect of the buttocks and the posterior upper thigh.

Medially, the region extends to the mid-dorsal line and is called the intergluteal cleft, which is the groove that separates the buttocks from each other.

Actually, before we move on, let’s review some important landmarks to help you understand this region’s anatomy better.

The sacrotuberous ligament goes from the posterior surface of the ilium and the lateral surfaces of the sacrum to the ischial tuberosity.

A similar ligament, called the sacrospinous ligament, passes from the lateral surface of the sacrum and the coccyx to the ischial spine.

Simply put, the greater and lesser sciatic foramina are passageways, or “doors” for structures leaving the pelvis and entering the gluteal region and vice versa.

The lesser sciatic foramen, on the other hand, provides passage for structures entering or leaving the perineum, including the tendon and nerve of obturator internus as well as the pudendal nerve and vessels.

Ok, so the gluteal region is mostly considered a large transitional zone between the trunk and the lower limb.

The muscles of the gluteal region are organized into two layers, the superficial containing the three large overlapping gluteus muscles, and the deep layer consisting of smaller muscles which all have distal attachments on or near the greater trochanter of the femur, providing lateral rotation and stabilization of the femur.

Let's start superficially and talk about one of the most well known muscles in the body.

The Gluteus maximus is the most superficial of the bunch and it’s also the largest and the heaviest muscle of the body.

More importantly, it originates posterior to the posterior gluteal line of the ilium, on the dorsal surface of the sacrum and coccyx, and on the sacrotuberous ligament.

It then slopes inferolateral at a 45° angle from the pelvis to the buttocks, where fibers from its superior part alongside superficial fibers from its inferior parts insert into the iliotibial tract, a longitudinal fibrous reinforcement of the fascia lata which crosses the knee and attaches to the anterolateral tubercle of the tibia.

Additionally, some of the deep fibers of the inferior part of the muscle attach to the gluteal tuberosity of the femur.

And when it comes to actions, it steadies, extends, and laterally rotates the thigh, it helps with getting up from a sitting position, and, when the distal attachment of the gluteus maximus is fixed, the muscle extends the trunk on the lower limb.

It also helps us straighten from bending positions, like when walking up stairs or hills.

Finally, since the gluteus maximus inserts onto the iliotibial tract, it also assists in stabilizing the extended knee.

Oh, and while at it, we should mention that the gluteus maximus is separated from adjacent structures by the gluteal bursas.

The fluid is a lubricant, which is why bursas are typically located in areas subject to friction, like where the iliotibial tract crosses the greater trochanter, to reduce friction and permit free movement.

There are three bursas associated with the gluteus maximus.

First is the trochanteric bursa which is the largest of the three, and it separates the superior fibers of the gluteus maximus from the greater trochanter.

Second, the ischial bursa separates the inferior part of the gluteus maximus from the ischial tuberosity; however, this one is often absent.

And third, the gluteofemoral bursa separates the iliotibial tract from the superior part of the proximal attachment of the vastus lateralis.

These two muscles are both fan-shaped and they both originate on the external surface of the ilium.

Specifically, gluteus minimus originates between the anterior and inferior gluteal lines of the surface and it inserts on the anterior surface of the greater trochanter of the femur.

The gluteus medius, on the other hand, is between the posterior and anterior gluteal lines and inserts on the lateral surface of the greater trochanter.

These muscles are also important for walking and standing, as they keep the pelvis level during walking when the ipsilateral leg is planted and prevents sagging of the unsupported contralateral side during swing phase or standing.

And the final muscle of the superficial layer is tensor fascia lata, which is a spindle-shaped muscle, approximately 15 centimeters long, that is enclosed between the two layers of fascia lata.

From this point, it descends on the superficial and anterior part of the gluteus maximus, with which it shares a common distal attachment, the iliotibial tract, via which it inserts on the lateral condyle of the tibia.

However, unlike the gluteus maximus, the tensor fasciae latae is served by the superior gluteal nerve and artery.