A 70-year-old man comes to the office because of fatigue and pain in his jaw and ribs for the past 2 weeks. He has no history of trauma, but he says he is constipated, and a relative says that he has been more confused lately. He has a history of ischemic heart disease and osteoarthritis. Physical examination is non-contributory. Laboratory studies show normal anion-gap acidosis. Peripheral blood smear is obtained and is shown below. Chest X-ray shows lytic bone lesions of the ribs. Which of the following is the most likely diagnosis? 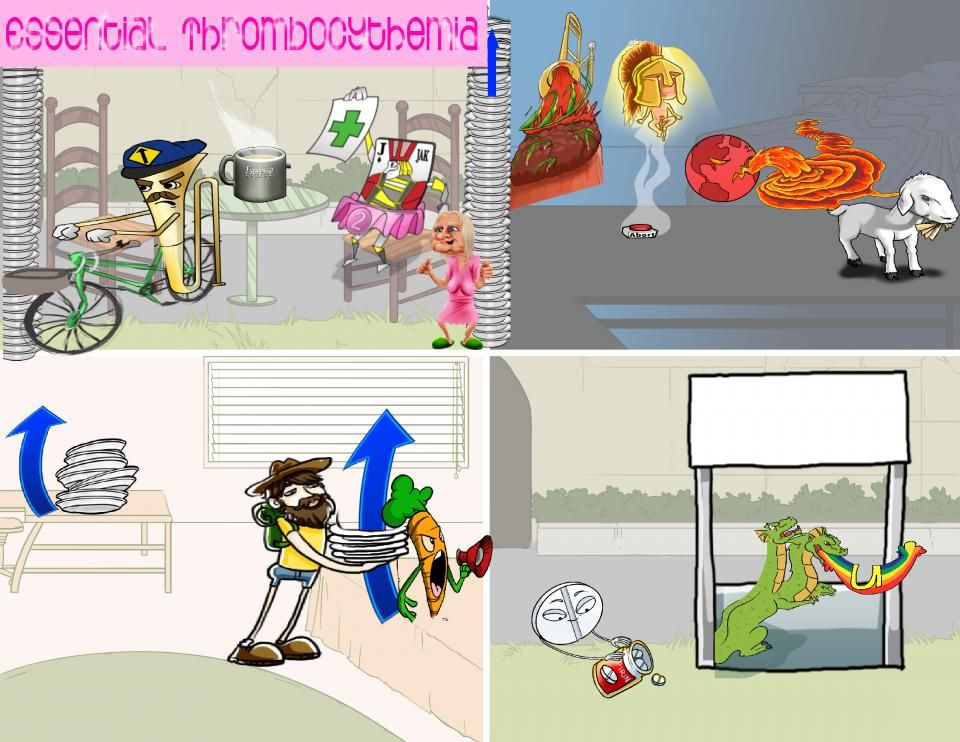 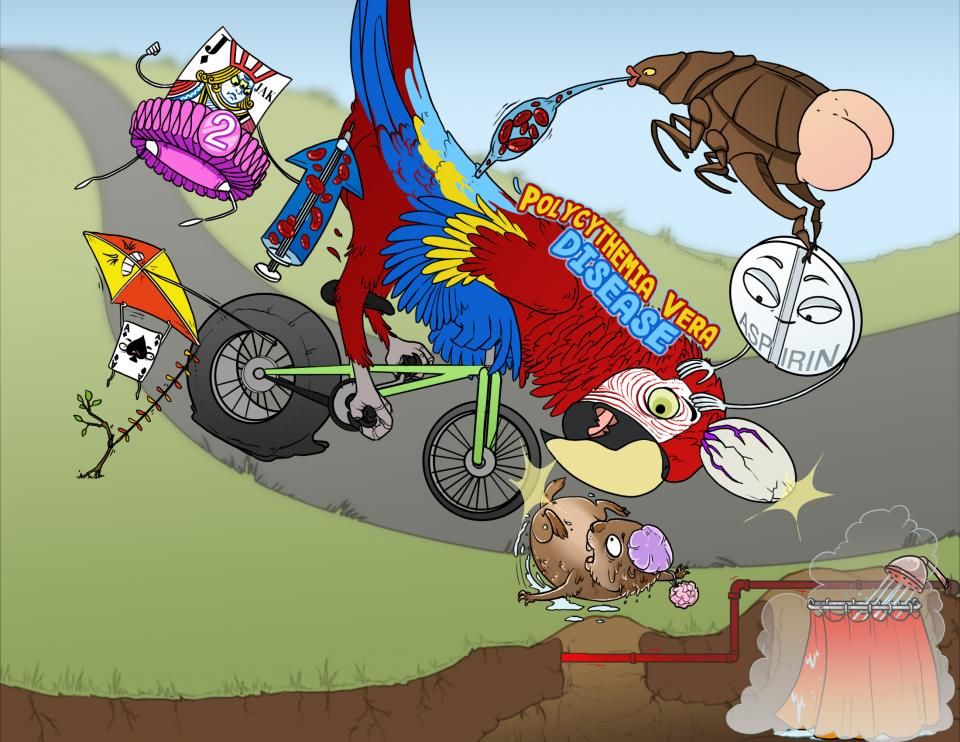 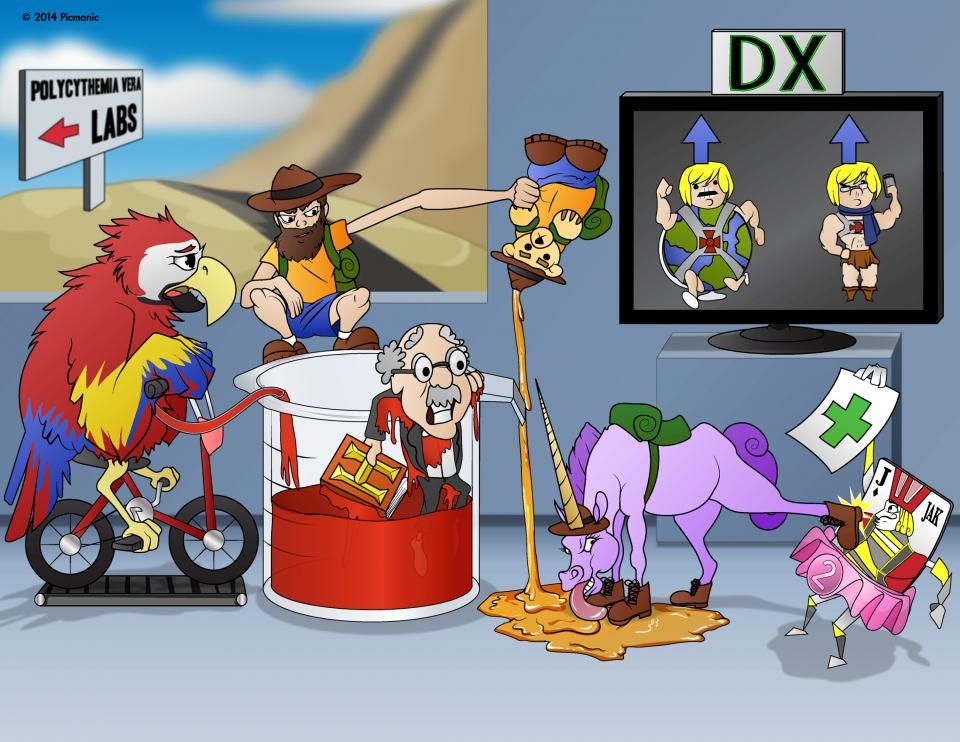 Myeloproliferative neoplasms are a group of neoplastic disorders characterized by proliferation of the bone marrow cells from the myeloid lineage. That includes red blood cells, platelets, megakaryocytes, as well as granulocytes, which include neutrophils, basophils, mast cells, and eosinophils.

So there’s polycythemia vera, for red blood cells, essential thrombocythemia for megakaryocytes and platelets, chronic myeloid leukemia, or CML for granulocytes, and the odd one out, primary myelofibrosis, which doesn’t really have a dominant cell line, but instead is characterized by bone marrow fibrosis.

Now, these are diagnoses of exclusion. So for example, when you see an increase in platelets, or thrombocytosis, you have to think through all of the other causes before considering essential thrombocythemia.

Women have a lower cutoff because they normally lose some blood through the menses.

So, starting with secondary polycythemia - relative polycythemia happens when something like dehydration, diuretic use or a burn injury causes a decrease in plasma volume, resulting in an apparent increase of RBCs, but the RBCs are only increased relative to the plasma. Therefore, we don’t expect any change in the RBC mass, oxygen saturation, and erythropoietin levels.

Appropriate absolute polycythemia is an appropriate physiological response to any cause of chronic hypoxia, like lung disease, congenital heart disease, or even hiking up Mount Everest in Nepal.

In response to the decrease in oxygen saturation, the interstitial cells of kidney make more erythropoietin, which signals to the bone marrow to produce more RBCs to compensate for the hypoxia. Over time, the RBC mass increases, while the plasma volume remains about the same.

Now, inappropriate absolute polycythemia, on the other hand, is not some sort of normal physiological response.

Instead, it occurs due to pathologic overproduction of erythropoietin from malignancies such as renal cell carcinoma, hepatocellular carcinoma, cerebellar hemangioblastoma, leiomyoma or pheochromocytoma.

So, erythropoietin levels and RBC mass are increased, but the oxygen saturation and plasma volume are normal.

Almost all patients with polycythemia vera have a gain-of-function mutation in the JAK2 gene, which codes for a tyrosine kinase in the erythropoietin receptor on RBC stem cells, causing those cells to always be active, even when the receptor isn’t bound to erythropoietin. This results in massive RBC production.

The interstitial cells of the kidney sense the high levels of RBCs, so they decrease the erythropoietin production, but it doesn’t matter because the JAK2 mutation makes RBC proliferation independent of erythropoietin.

Most patients with polycythemia vera don’t have symptoms and are discovered incidentally, when a CBC is done for another reason. But sometimes symptoms can occur.

First, all those extra RBCs in the blood make it sludgy and highly viscous.

Hyperviscosity causes stasis in the circulation, which augments the formation of blood clots in different tissues, such as the brain, causing blurred vision, headache, or strokes. Or in the heart, causing myocardial infarction. Or even in unusual locations, such as the hepatic veins, resulting in Budd-Chiari syndrome; characterized by the triad of abdominal pain, ascites and an enlarged liver. The face can appear plethoric, which means a constant blush, because more RBCs means more redness.

Since myeloproliferative neoplasms may cause an increase in all myeloid cells, mast cells may also be increased in polycythemia vera.

A rare but characteristic presentation of polycythemia vera is erythromelalgia; which are episodes of redness and intense warmth and pain in the palms and soles, caused by small blood clots in the distal extremities.

These blood clots may manifest from the hyperviscosity that predisposes patients to thrombosis.

It may also be related to an increased platelet count in polycythemia vera patients.

Purines are metabolized into uric acid, and this increased metabolism can result in hyperuricemia, which can potentially cause gout.

The spleen, which is a bit like a nursing home for old RBCs, starts to get really filled up, resulting in splenomegaly, which can be detected by physical exam or ultrasound.

The enlarged spleen can push against the nearby stomach wall, limiting how much it can expand during meals, causing early satiety and eventual weight loss.

The workup for polycythemia vera includes a CBC, which will show an increase in hemoglobin, hematocrit, and RBC mass, as well as a slight increase in white blood cells and platelets as well. Additionally, uric acid levels may be increased, and erythropoietin levels are decreased.

Also, a bone marrow biopsy is done, and the cells are tested for the presence of the JAK2 mutation.

The diagnosis is polycythemia vera hinges on having an increased hemoglobin or hematocrit and a bone marrow biopsy showing increased proliferation of all myeloid cells, along with either a decrease in erythropoietin levels or the presence of a JAK2 mutation.

The best initial treatment of polycythemia vera is therapeutic phlebotomy, which is repeatedly drawing blood from the patient, until the hematocrit is less than 45%. Basically blood-letting.

Additionally, patients should be on low-dose aspirin, to reduce the risk of thrombosis.

If the patient is more than 60 years of age or had a history of previous thrombosis, the risk of thrombosis is even higher, and therefore the bone marrow suppressing agent hydroxyurea should be added.

If hydroxyurea doesn’t work, then a specific inhibitor of JAK2 tyrosine kinase called ruxolitinib can be added.

Hyperuricemia is treated with allopurinol, a xanthine oxidase inhibitor, and patients with pruritus are given antihistamines, so they can enjoy a hot shower.

Okay, onto thrombocytosis, defined as a platelet count more than 450,000.

The most common cause is reactive thrombocytosis, which is a reaction of the bone marrow to make more platelets when the body is experiencing something like bleeding, iron-deficiency anemia, or inflammation.

In addition, since the spleen normally houses about one third of the peripheral platelet pool, there can be a thrombocytosis in individuals that have had a splenectomy.

Once these causes of thrombocytosis have been excluded, it’s worth considering essential thrombocythemia.