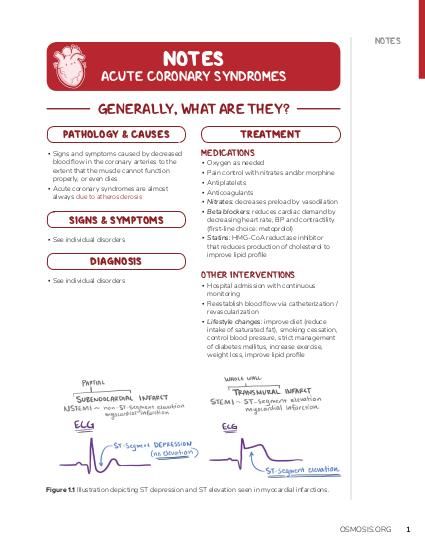 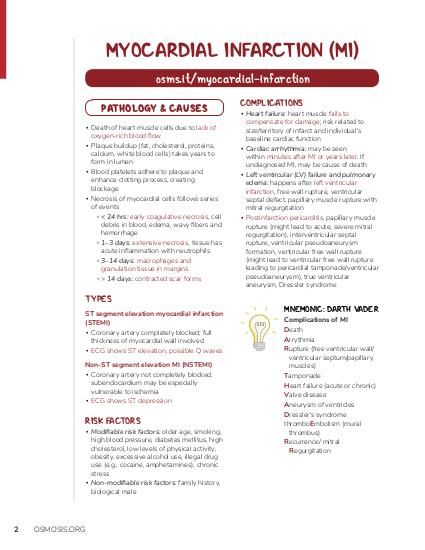 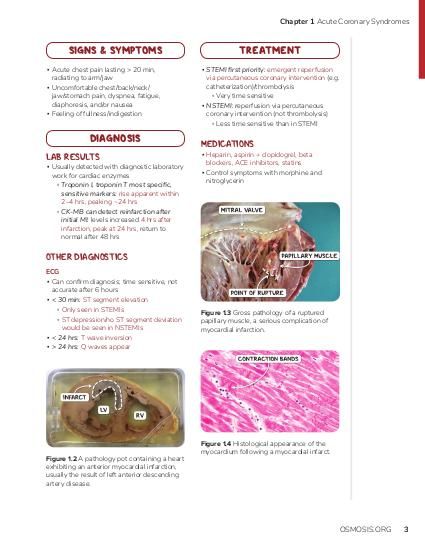 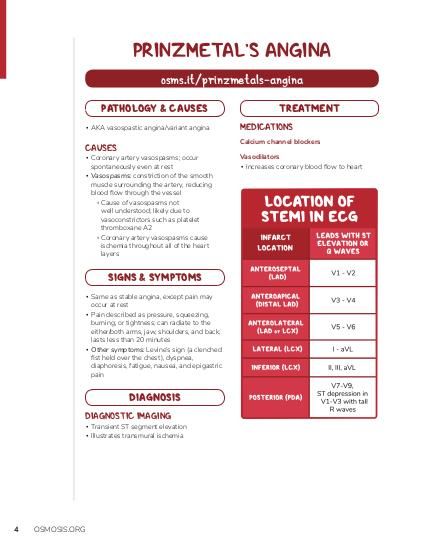 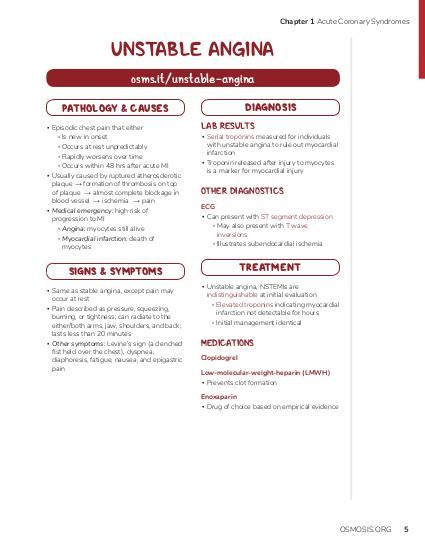 A 62-year-old Caucasian woman comes to the office because of shortness of breath for the past six hours. She had a myocardial infarction five days ago, which was treated medically because she failed to come to the hospital in time for primary percutaneous coronary intervention. On cardiac auscultation, a high-pitched holosystolic murmur is heard at the apex, when she is lying on her left side. Coarse crackles are heard at the lung bases bilaterally on pulmonary auscultation. Which of the following muscles is most likely damaged? 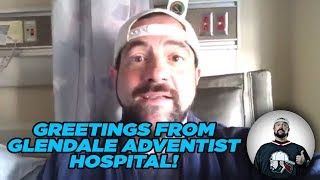 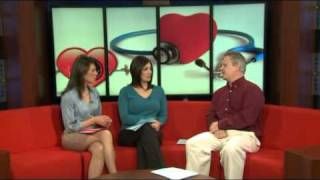 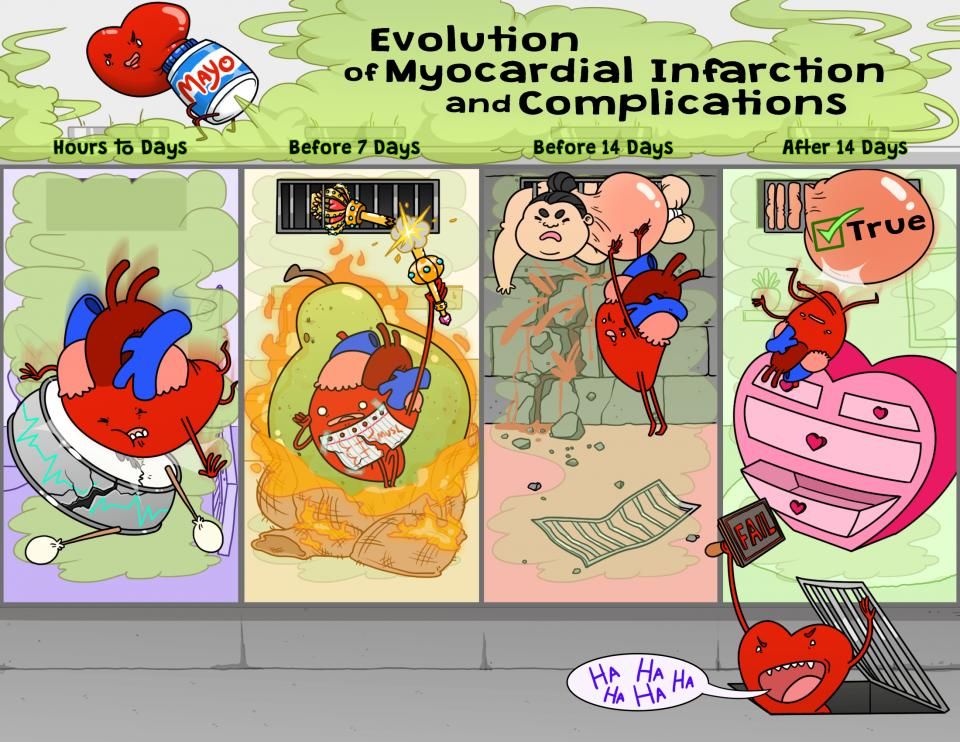 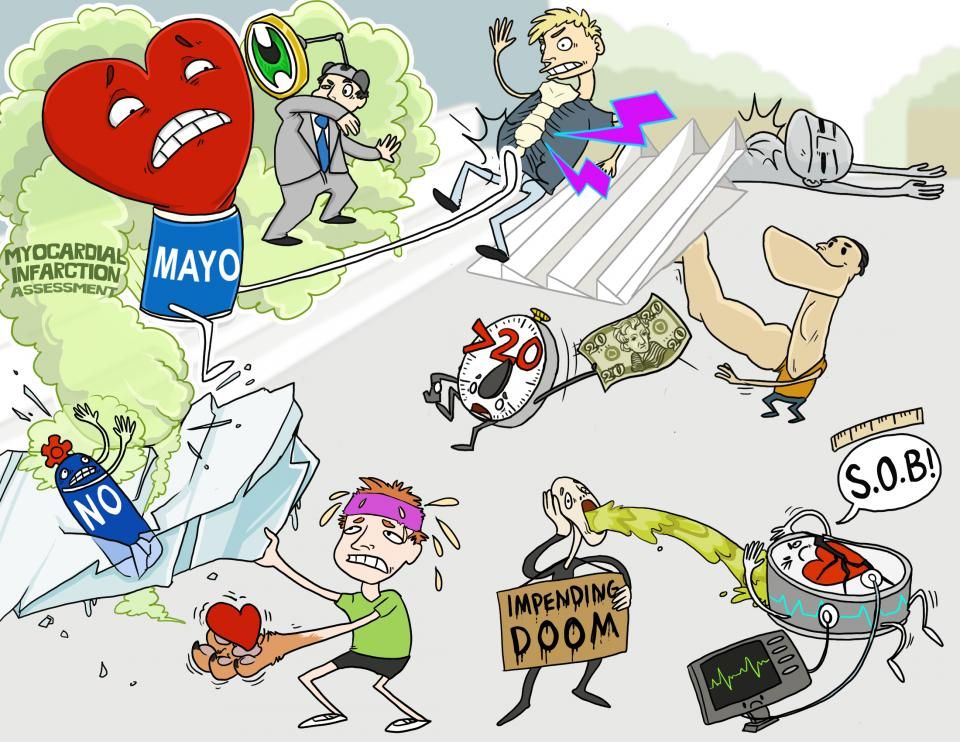 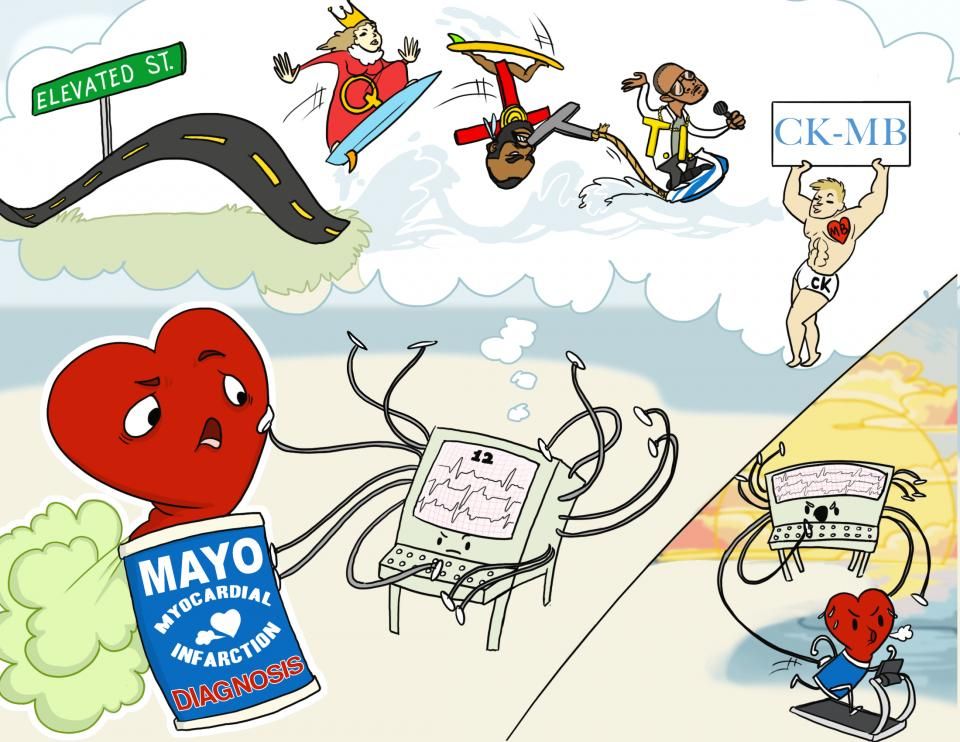 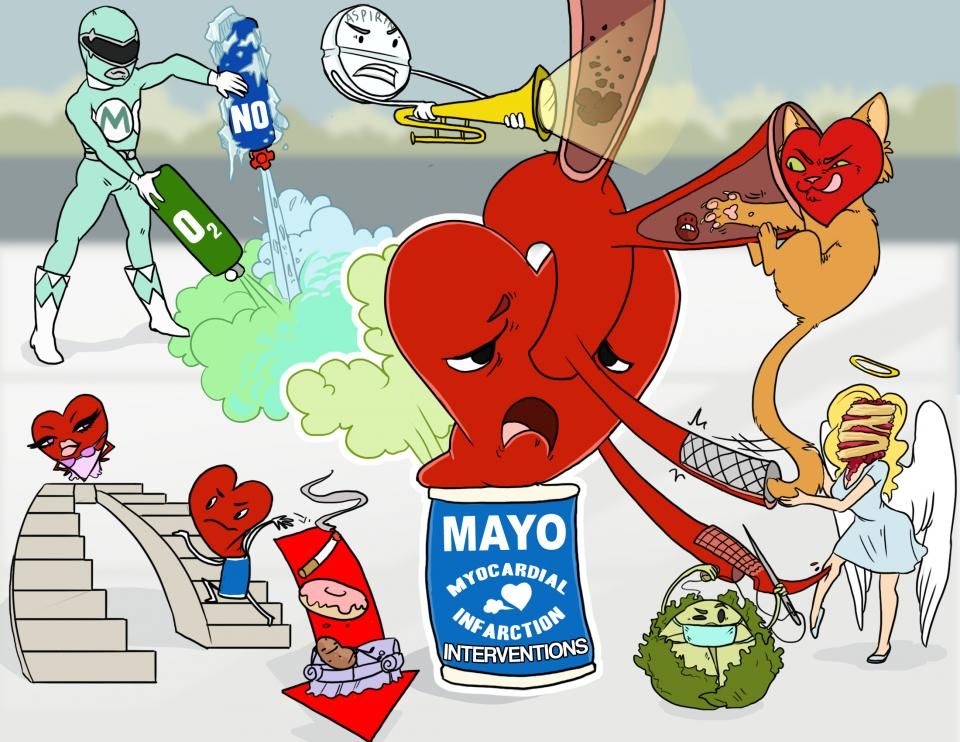 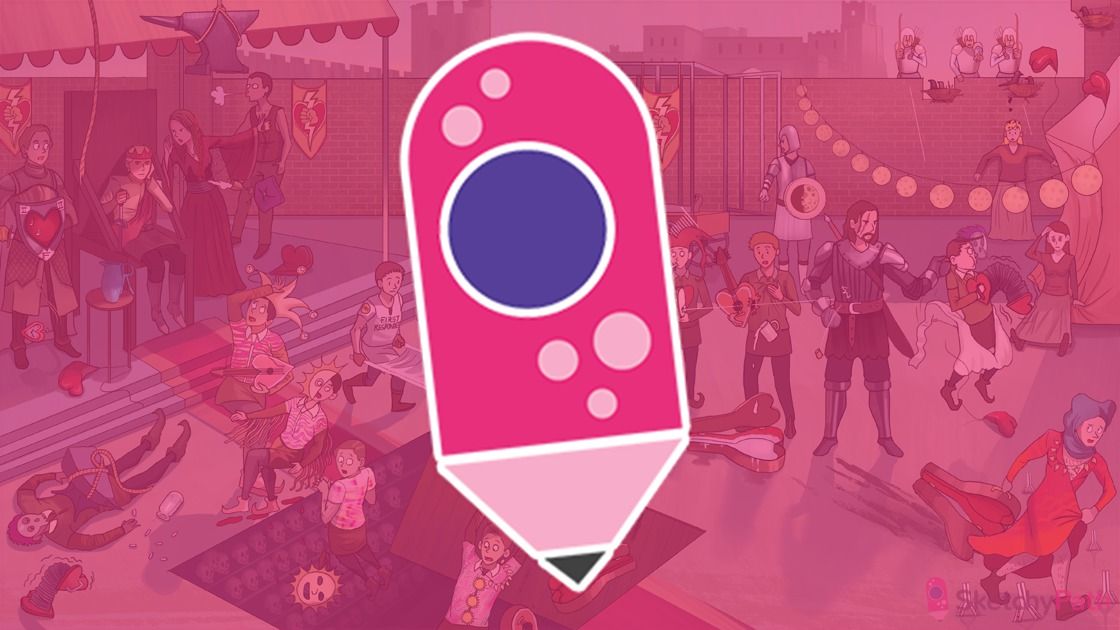 The word infarction means that some area of tissue has died due to a lack of blood flow, and therefore a lack of oxygen. “Myo” refers to the muscle, and “cardial” refers to the heart tissue. So with a heart attack, or MI, you have death of heart muscle cells because of a lack in blood flow, a process called necrosis. Now the heart’s main job is to pump blood to your body’s tissues right? Well, the heart also needs blood, and so it also pumps blood to itself, using the coronary circulation. The coronary circulation is this system of small arteries and veins that help keep the heart cells supplied with fresh oxygen. Heart attacks happen when these small arteries become blocked and stop supplying blood to the heart tissue, and if this happens for long enough, heart tissue dies.

Almost all heart attacks are ultimately a result of endothelial cell dysfunction, which relates to anything that irritates or inflames the slippery inner lining of the artery—the tunica intima. One classic irritant are the toxins found in tobacco which float around in the blood and damage these cells. That damage then becomes a site for atherosclerosis, a type of coronary artery disease where deposits of fat, cholesterol, proteins, calcium, and white blood cells build up and start to block blood flow to the heart tissue. This mound of stuff has two parts to it, the soft cheesy-textured interior and the hard outer shell which is called the fibrous cap. Collectively this whole thing’s ominously called plaque. Usually, though, it takes years for plaque to build up, and this slow blockage only partially blocks the coronary arteries, and so even though less blood makes it to heart tissue, there’s still blood. Heart attacks happen when there’s a sudden complete blockage or occlusion of a coronary artery—so let’s see how that can happen. Since these plaques sit right in the lumen of the blood vessel, they’re constantly being stressed by mechanical forces from blood flow, and interestingly it’s often the smaller plaques with softer caps rather than the larger ones with harder caps that are especially prone to break or get ripped off. Once that happens the inner cheesy filling which remember is this mix of fat, cholesterol, proteins, calcium, and white blood cells, is thrombogenic, and this means that it tends to form clots very quickly. So platelets, or blood-clotting components in the blood, flow by and get excited; and they adhere to the exposed cheesy material. In addition to piling up, the platelets also release chemicals that enhance the clotting process. Now this happens super fast, think about how quickly a small cut stops bleeding, that’s a very similar process—it happens in a matter of minutes, right? And now that coronary artery is fully occluded.

Each of these areas is called the artery’s zone of perfusion. And, if we take a closer look at one of these zones, we’ll see that basically you’ve got the endocardium, which is the smooth membrane on the inside of the heart, and then the myocardium, all the heart muscle, and then, the epicardium, the outer surface of the heart, which is where the coronary arteries live. Let’s say the LAD gets blocked, the area of perfusion is now at serious risk, and within about a minute, the muscle cells in this zone don’t see enough oxygen and become ischemic, and the muscle layer’s ability to contract is severely reduced. This initial stage is extremely sensitive, since the ischemic damage to cells in the perfusion zone is potentially reversible. After about 20-40 minutes, though, damage starts to become irreversible and the cells start to die, and this zone changes to a zone of necrosis, or dead tissue. Once lost, these cells will never return or regrow—that’s why quickly identifying and treating an MI quickly is super important.

The first area affected is the inner third of the myocardium, since it’s farthest from the coronary artery and the last area to receive blood, and it’s subject to higher pressures from inside the heart. If the blockage suddenly lyses or breaks down and blood flow returns, sometimes patients’ damage will be limited to the inner third, and this would be called a subendocardial infarct. An ECG, or electrocardiogram, done at this point typically shows an ST-segment depression, or in other words, it doesn’t show ST segment elevation, so sometimes we call this an NSTEMI which stands for non-ST elevation myocardial infarction.Other causes of this sort of subendocardial infarcts would be severe atherosclerosis and hypotension—anything that ultimately leads to poor perfusion of the heart tissue. After about 3 to 6 hours, though, the zone of necrosis extends through the entire wall thickness, called a transmural infarct, which this time shows up as ST-segment elevation on ECG, which is why they’re sometimes called STEMIs, or ST elevation myocardial infarctions. So the difference between NSTEMIs and STEMIs is that NSTEMIs don’t have ST-segment elevation, and these are caused by partial infarct of the wall, whereas STEMIs have ST-segment elevation and involve the whole wall thickness.

Patients that have an MI will most commonly have severe and crushing chest pain or pressure, that might radiate up to the left arm or jaw, they might have diaphoresis or sweating, nausea, fatigue, and dyspnea. All of these are either a direct result of an end-organ like the heart or the brain not getting enough perfusion—so think chest pain and dizziness. Or from the sympathetic response from the body to help the heart work harder and preserve blood pressure—so think sweating and clammy skin. Many people also have referred pain where the nerves in the heart are irritated, but that pain can be felt in the jaw, shoulder, arm, or back instead.