A 44-year-old man comes to his primary care physician because of muscle pain, increased difficulty concentrating, and sleeping too much. The patient states that these symptoms have been present over the last six months, and is getting worse, interfering with his work. He says that his sleep quality has been very poor. In addition, he also noticed that he has been having difficulty getting up from sitting down or squatting, and picking up his dog is harder than it used to be. Physical examination shows decreased muscle strength in upper and lower extremities bilaterally with slowed relaxation after contraction. An eye examination shows a pathognomonic pattern of iridescence on his lens as shown below. Which of the following is the most likely diagnosis? 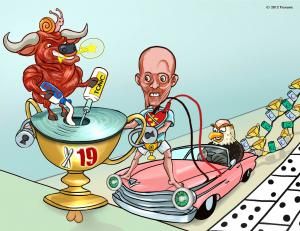