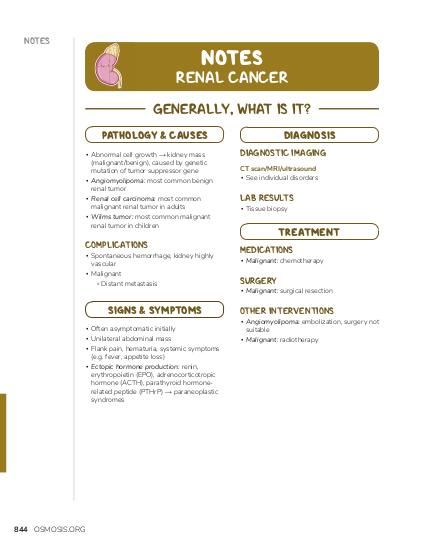 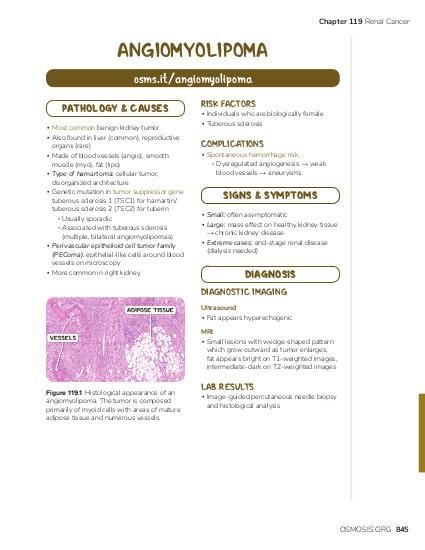 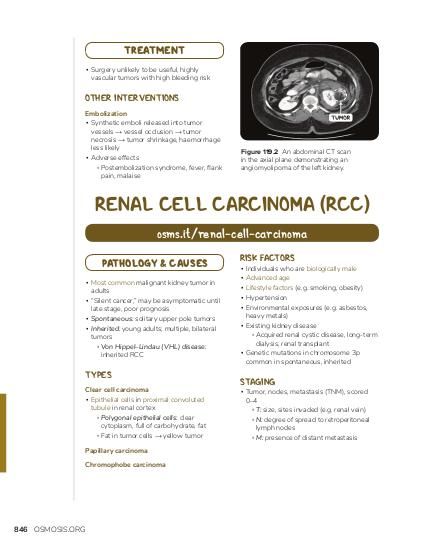 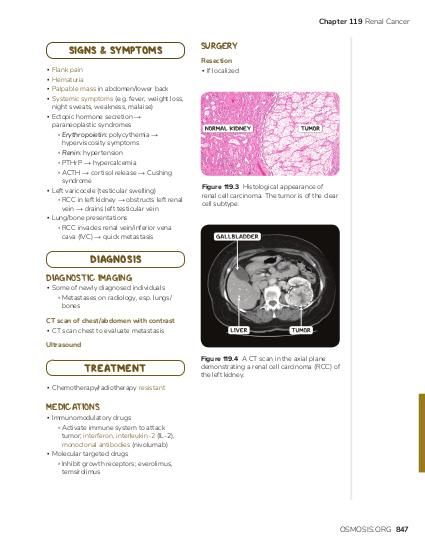 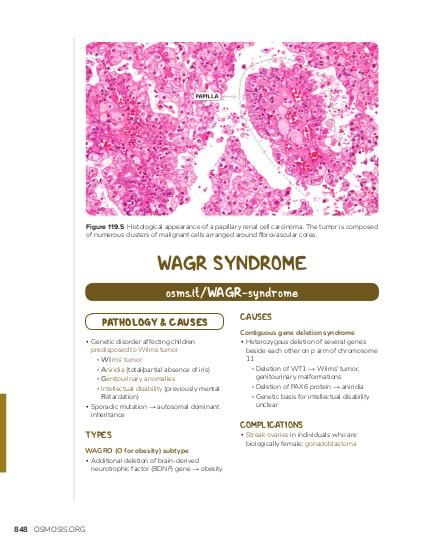 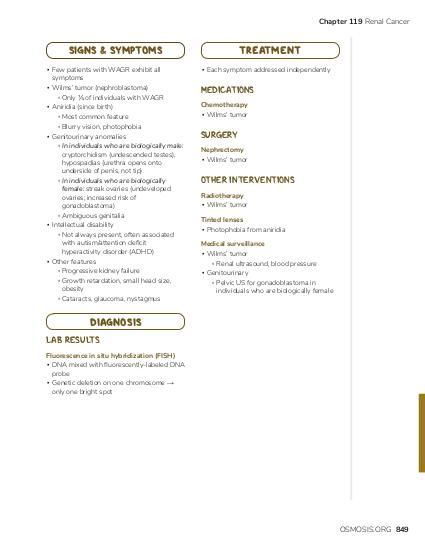 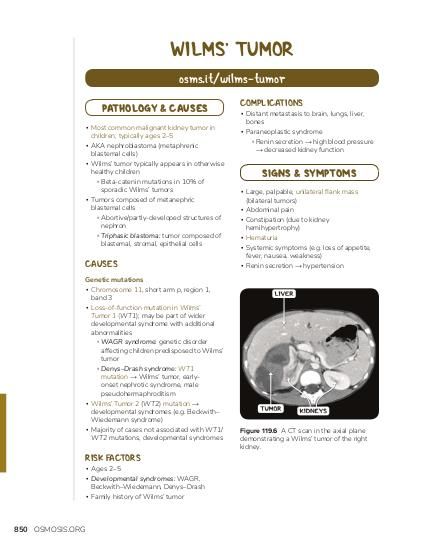 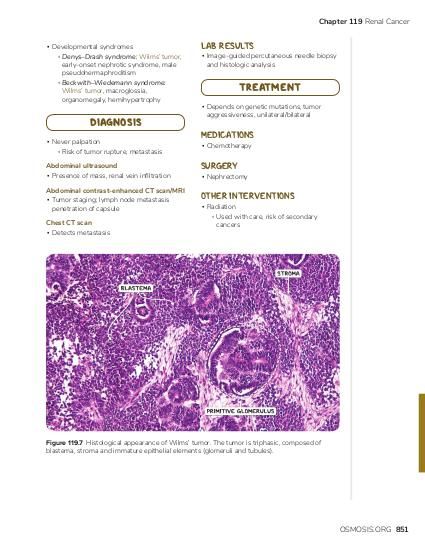 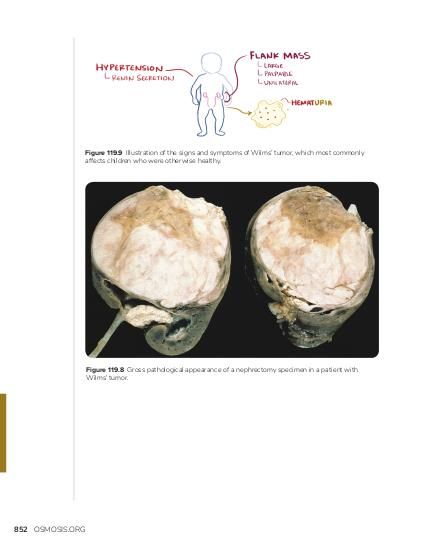 The management of bilateral Wilms tumor is .

A 2-year-old boy comes to the operating room for surgical removal of a posterior fossa tumor for the past 5 months. The mass has caused him to have an altered mental status, multiple cranial nerve palsies, and profoundly increased intracranial pressure. After surgery, he lapses into a coma. Pathological examination of the tissue shows findings of an atypical teratoid / rhabdoid tumor. Which of the following would also likely be seen on pathological examination? 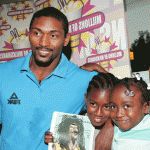 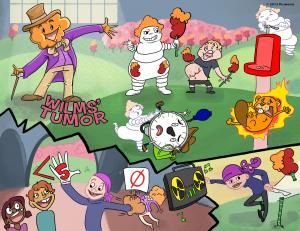 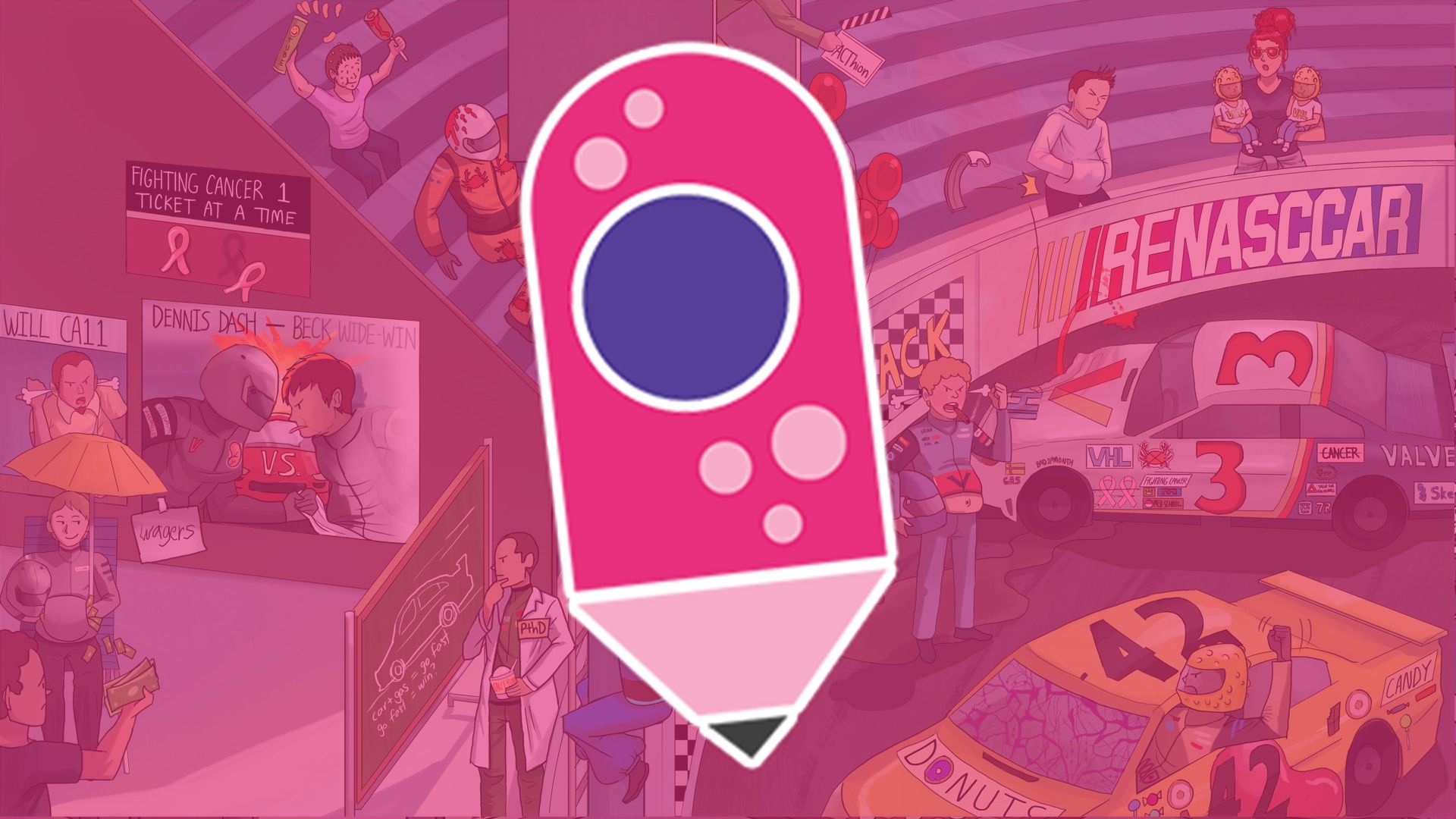 Wilms’ tumor, or nephroblastoma, is a type of kidney tumor composed of metanephric blastemal cells, cells involved in kidney development, and is the most common malignant kidney tumor in children; only rarely is it seen in adults.

Wilms’ tumor is thought to be caused by mutations in genes responsible for normal genitourinary development, which includes the kidneys as well as the gonads, typically the genes are located around 11p13—which means chromosome 11, the short arm p, region 1, band 3.

One gene critical for normal kidney and gonad development is WT1 (or Wilms’ Tumor 1), which a tumor suppressor gene.

Mutations that result in a “loss of function” of WT1, like deletions, for example, seem to lead to the development of tumor cells seen with Wilms’ tumor.

Wilms’ tumors as a result of WT1 mutations are sometimes part of a developmental syndrome, meaning other abnormalities are present as well, likely because of deletion or mutation of other genes in addition to WT1.

For example, in WAGR syndrome, a mutation in the 11p13 region causes deletion of both WT1 and the PAX6 genes, among others, which leads to Wilms’ tumor and Genitourinary malformations as a result of WT1 deletion, as well as Aniridia (which is absence of iris) and intellectual disability (which is formerly referred to as mental Retardation), as a result of PAX6 deletion.

Another syndrome associated with WT1 mutations is Denys-Drash syndrome, which is characterized by Wilms tumor, early-onset nephrotic syndrome, and male pseudohermaphroditism.

Another gene, WT2, also located on chromosome 11, seems to also be involved with other Wilms’ tumor-containing syndromes, like Beckwith-Wiedemann syndrome, which includes Wilms’ tumor, macroglossia, organomegaly, and hemihypertrophy.