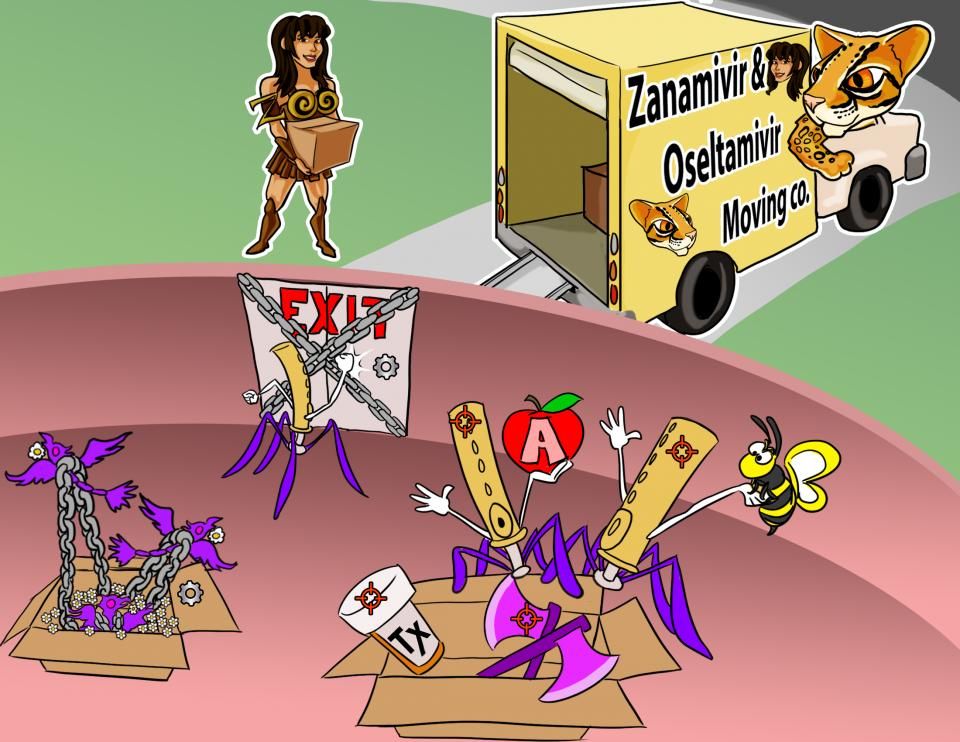 Neuraminidase inhibitors are antiviral medications mainly used to treat influenza, which is the virus that causes the flu.

There are three types of influenza viruses that infect humans; type A, type B, and type C, and each one has a slightly different genome and set of proteins.

Now, neuraminidase inhibitors work by preventing the release of new viruses from infected cells, thereby limiting the duration of the illness.

Alright, first let’s focus on influenza A and influenza B.

These viruses have two types of glycoproteins on their protective envelope: H protein, or hemagglutinin; and N protein, or neuraminidase.

Next, the virus releases its viral RNA which moves into the cell’s nucleus.

Now, these RNAs are negative-sense, meaning they need to be transcribed by RNA polymerase into positive-sense mRNA strands.

These strands leave the nucleus and are translated into proteins by ribosomes.

These proteins are then assembled into new viruses.

Now that we have a cell that’s pretty much a virus-producing factory, it will continue to produce more and more viruses which bud off the host cell’s plasma membrane and leave the body.

However, the same hemagglutinin that allowed the virus to attach to the sialic acid sugar on the cell surface, can bind to these sugars again and prevent the viruses from leaving the host cell.

So, in order to be released, the virus uses the neuraminidase proteins to cleave the sialic acid and free itself.

So in short, hemagglutinin allows the virus to enter the cell, while neuraminidase lets the virus leave the cell.

Now, neuraminidase inhibitors, as their name implies, bind and inhibit the enzyme neuraminidase, thereby preventing the release of new viruses.