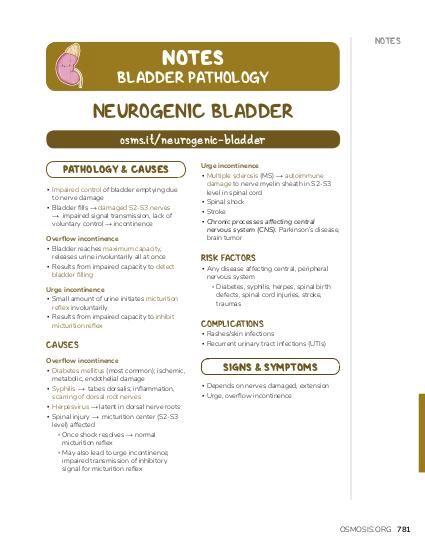 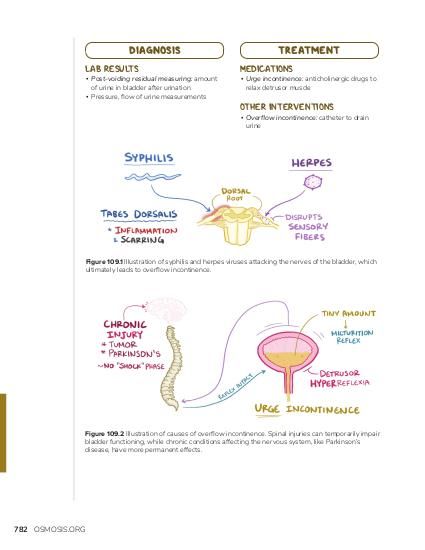 A 75 year-old African-American male comes to the office because of continuous dribbling of urine which began one month ago. In addition, the patient endorses difficulty initiating and maintaining a urinary stream. Past medical records indicate that he has hypertension and type 2 diabetes mellitus. The patient has a 40-pack-year smoking history. His temperature is 37.0°C (98.6°F), blood pressure is 150/86 mmHg, pulse is 70/min, and respirations are 15/min. Cardiac, pulmonary, and abdominal examinations are non-contributory. Digital rectal exam reveals an enlarged, symmetrical, and smooth prostate. Laboratory study results are as follows:

Which of the following is the most likely cause of the patient’s urinary symptoms?
Memory Anchors and Partner Content

Neurogenic bladder is a type of bladder dysfunction that is caused by damage to the nerves related to the bladder control. It is characterized by difficulty emptying the bladder normally, as a result of either damage to the peripheral nerves, brain, or spinal cord.

Neurogenic bladder can occur as a result of various conditions, such as spinal cord injuries, multiple sclerosis, and diabetes. Related bladder dysfunctions could be overflow incontinence, where the bladder fills up to capacity and then dribbles out of the urethra, or urge incontinence, where an individual feels frequent urges to urinate.