A 22 year old male patient presents to the emergency room with 12 hours of severe hematemesis and hematochezia. The patient is stabilized in the ICU overnight and undergoes an upper endoscopy the following morning. Anesthesia is induced and maintained with midazolam and propofol. The patient is at aspiration risk, so he is intubated with succinylcholine used for neuromuscular blockade. 45 minutes later the procedure is complete, and anesthesia is stopped, but 5 minutes later the patient is not making any respiratory effort. Train of four monitoring reveals 0 out of 4 twitches. What is your next best step in the management of this patient? 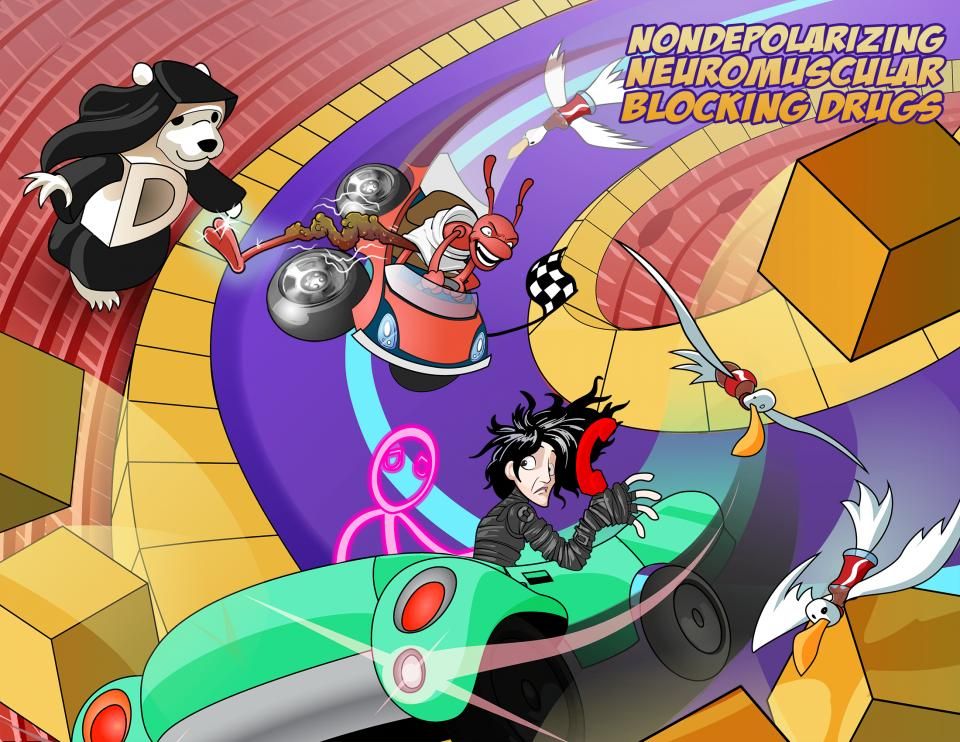 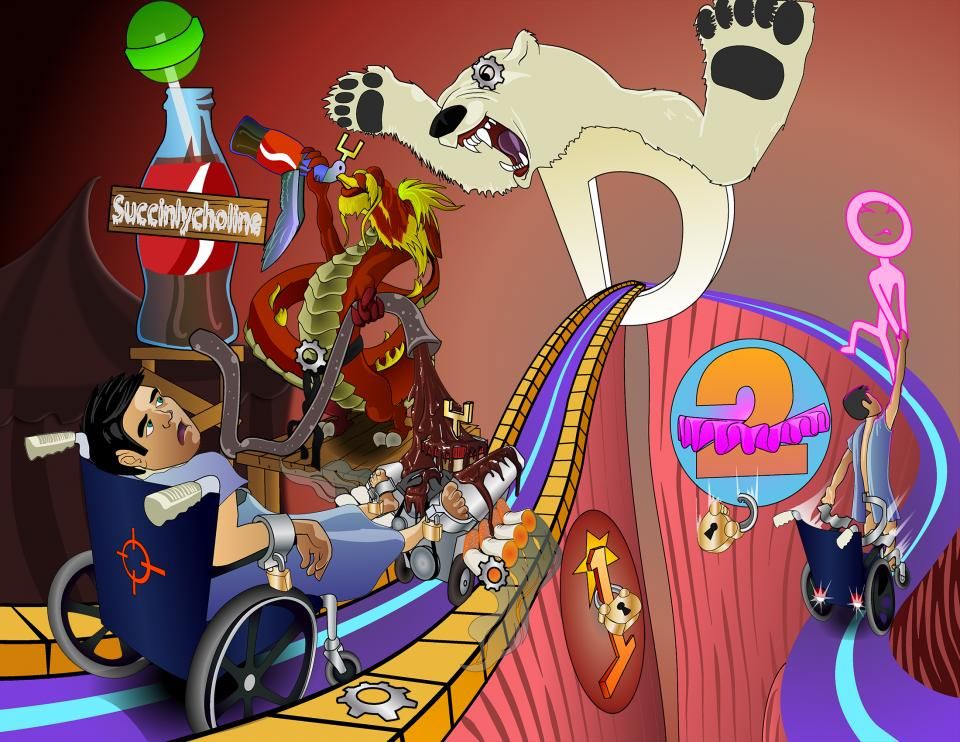 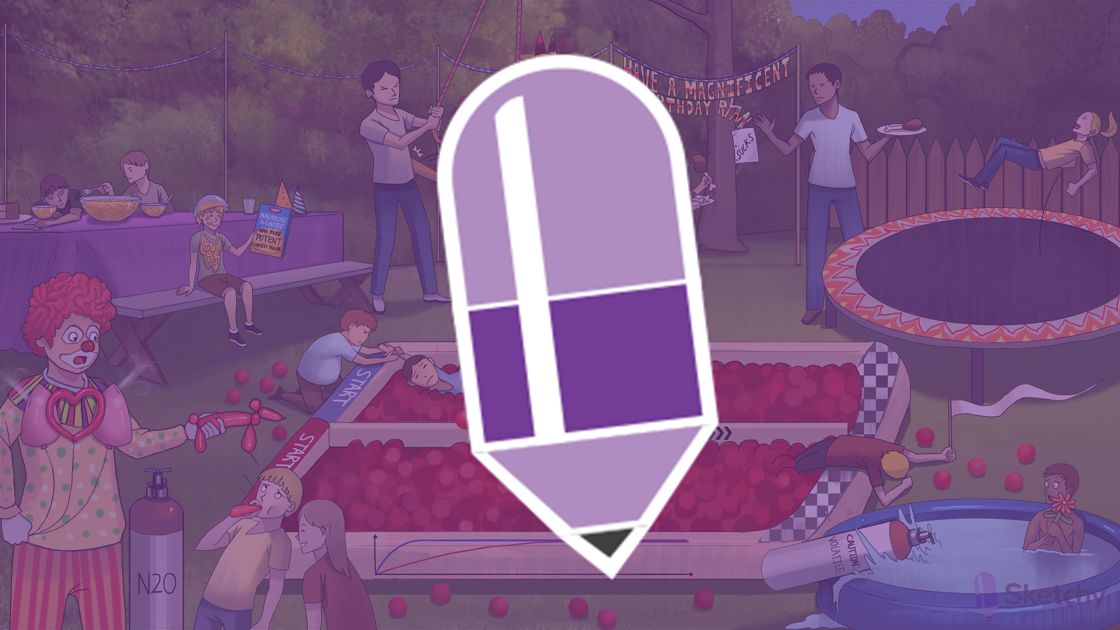 Neuromuscular blockers are a class of medications that prevent acetylcholine from acting at the neuromuscular junction, which prevents the triggering of skeletal muscle contractions.

Okay, first things first. In order for a skeletal muscle to contract, your brain sends a signal, in the form of an action potential in an upper motor neuron.

The acetylcholine then diffuses over to the motor end plate on the muscle fiber and binds to ligand-gated ion channels, also called nicotinic receptors.

When that happens, these ligand-gated ion channels open up, letting lots of sodium ions rush into the skeletal muscle fiber, and a few potassium ions leak out of the cell as well. But overall there’s an increase in positive charge on the inside of the muscle fiber causing it to depolarize.

This causes the voltage-gated sodium ion channels on the membrane to open up, and there’s a huge influx of sodium ions into the muscle fiber.

This leads to a generation of an action potential, which rapidly spreads along the entire membrane, causing the whole muscle fiber to contract.

When the signal sent from the lower motor neuron stops, this causes synaptic vesicles full of acetylcholine to stop fusing with the membrane, while molecules of acetylcholine that are left behind within the synaptic cleft, are chopped up by an enzyme called acetylcholinesterase. And muscle contraction stops.

Alright, so neuromuscular blockers are medications that block the interaction between acetylcholine and nicotinic receptors at the neuromuscular junction. This leads to skeletal muscle relaxation.

So, non-depolarizing neuromuscular blockers can bind to the same binding sites on the receptor as acetylcholine, but they don’t trigger the opening of ion channels.

So when administered, they compete for these binding sites on the receptors, which leads to decreased depolarization of the muscle fiber and weaker contraction.

This group of medications includes atracurium, vecuronium, rocuronium, pancuronium, and tubocurarine; you can keep these organized because they all have -cur- in their name.

Clinically, they are usually used to relax the muscles before surgery or during intubation for mechanical ventilation, which is when someone is connected to a ventilator machine that helps them breathe.

They can also be used as general anesthetics during surgical procedures.

So typically, non-depolarizing neuromuscular blockers are injected intravenously, and in less than a couple of minutes, they begin paralyzing small muscles of the face and fingers; then larger muscles in the neck, torso, and limbs; then finally, the diaphragm.

Gradually, in about 40 to 90 minutes, these muscles start recovering in the reverse order, so first the diaphragm, then the limbs, torso, neck, and then fingers and the face.

Now for side effects, they occur more frequently with atracurium.

Specifically, atracurium induces histamine release, which causes bronchoconstriction, or narrowing of the airways; as well as vasodilation, or blood vessel relaxation; and thus causing hypotension, reflex tachycardia, and flushing, or reddening of the face.

At the same time, it produces a toxic metabolite, called laudanosine.

Laudanosine is neurotoxic, so if it’s not properly excreted in the urine, like in individuals with kidney failure, it can build up in the blood and trigger seizures.

Now, reversal of these side effects can be achieved by giving cholinesterase inhibitors like neostigmine, which inhibit the degradation of acetylcholine by cholinesterase.