When action potentials jump from one node of Ranvier to the next it is known as conduction. 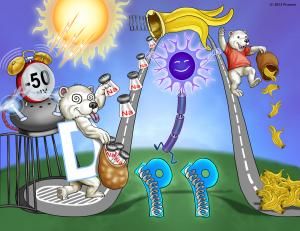 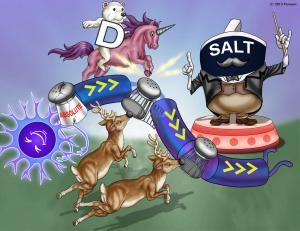 Neurons are the cells that make up our nervous system, and they’re made up of three main parts.

The dendrites, which are little branches off of the neuron that receive signals from other neurons, the soma, or cell body, which has all of the neuron’s main organelles like the nucleus, and the axon which is intermittently wrapped in fatty myelin.

Those dendrites receive signals from other neurons via neurotransmitters, which when they bind to receptors on the dendrite act as a chemical signal.

That binding opens ion channels that allow charged ions to flow in and out of the cell, converting the chemical signal into an electrical signal.

Since a single neuron can have a ton of dendrites receiving input, if the combined effect of multiple dendrites changes the overall charge of the cell enough, then it triggers an action potential, which is an electrical signal that races down the axon up to 100 meters per second, triggering the release of neurotransmitter on the other end and further relaying the signal.

So neurons use neurotransmitters as a signal to communicate with each other, but they use the action potential to propagate that signal within the cell.

Some of these neurons can be very long, especially ones that go from the spinal cord to the toes, so the movement of this electrical signal within the cell is super important!

But why does the cell have an electric charge in the first place? Well, it’s based on the different concentrations of ions on the inside versus the outside of the cell.

Generally speaking, there are more Na+ or sodium ions, Cl- or chloride ions, and Ca2+ or calcium ions on the outside, and more K+ or potassium ion and A- which we just use for negatively charged anions, on the inside of the cell.

Overall, the distribution of these ions gives the cell a net negative charge of close to -65 millivolts relative to the outside environment, and this is called the neuron’s resting membrane potential.

When a neurotransmitter binds to a receptor on the dendrite, a ligand-gated ion channel opens up to allow certain ions to flow in, depending on the channel.

Ligand-gated literally means that the gate responds to a ligand, which in this case is a neurotransmitter.

So if we take the example of a ligand-gated Na+ ion channel, which, when it opens, lets Na+ flow into the cell. The extra positive charge that flows in makes the cell less negative (since remember it’s usually -65mV), and therefore less “polar”, so that’s why gaining positive charge is called depolarization.

Neurotransmitters typically open various ligand-gated ion channels all at once, so ions like sodium and calcium might flow in, while other ions like potassium might flow out, which would actually mean some positive charge leaves the cell.

In the end though, when it’s all added up, if there is a net influx of positive charge, then it’s called an excitatory postsynaptic potential (or EPSP).

In contrast, the opening of only ligand-gated Cl- ion channels would cause a net influx of negative charge, creating an inhibitory postsynaptic potential (or IPSP), making the cell potential more negative or repolarizing it.

Now, a single EPSP or IPSP causes only a small change on the resting membrane potential, but, if there are enough EPSPs across multiple sites on the dendrites then collectively they can push the membrane potential to a specific threshold value, typically about -55mV, although this can vary depending on the tissue.

When it hits this threshold value, it triggers the opening of voltage-gated sodium channels at the start of the axon, which is called the axon hillock.

These voltage-gated channels open in response to a change in voltage, and when these open sodium to rush into the cell.

The influx of sodium ions and the resulting change in membrane potential causes nearby voltage-gated sodium channels to open up as well, setting off this chain reaction that continues down the entire length of the axon, which ends up being our action potential, and when this happens we say that the neuron has ‘fired.’

Once a lot of sodium has rushed across the neuronal membrane, the call actually becomes positively charged relative to the external environment—up to about +40mV.

This depolarization process ends when the sodium channel stops allowing sodium to flow into the cells, which is a process known as inactivation. But this inactivated state is different than when the channel’s closed, or open for that matter, which is what most of the other channels have.

The voltage-gated sodium channel, though, is unique in that it has what’s known as the inactivation gate, which blocks sodium influx shortly after depolarization, and stays in this state until the cell repolarizes and the channel enters the closed state again and the inactivation gate stops blocking influx.