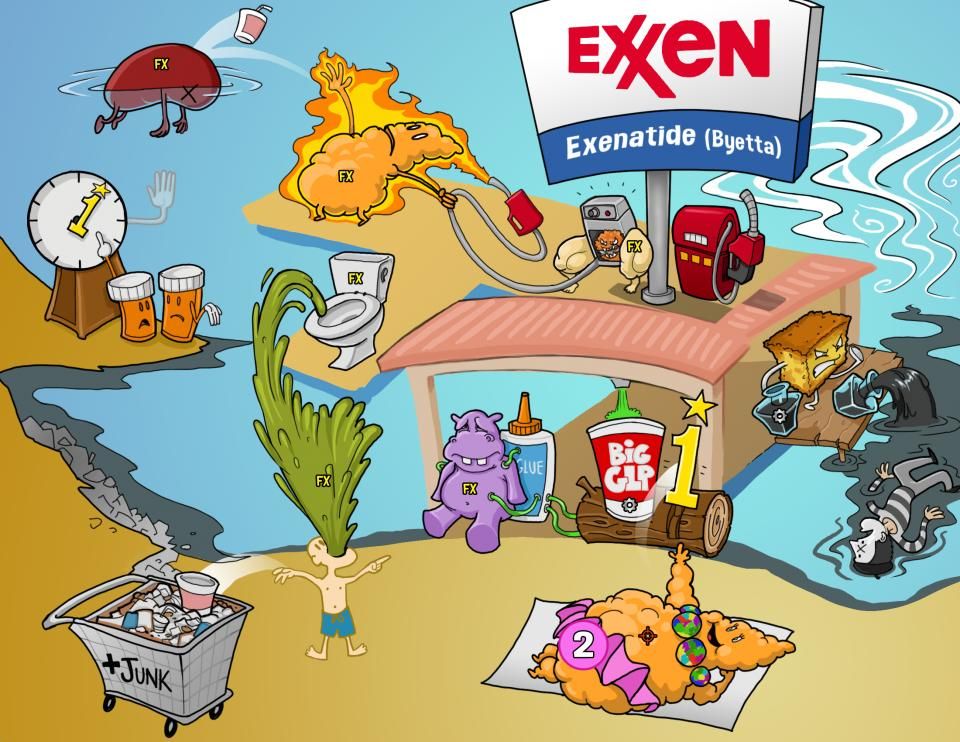 Glucagon-like peptide-1 or GLP-1 receptor agonists, and amylin mimetics, are two classes of medications that are primarily used to treat type 2 diabetes mellitus, but can also be used in type 1 diabetes as adjunct to insulin therapy.

Now, type 1 diabetes occurs when the pancreas is unable to produce enough insulin to maintain normal blood glucose levels. On the other hand, type 2 diabetes mellitus is characterized by insulin resistance, which is when tissue cells have trouble responding to insulin in order to use glucose from the blood.

As a result, tissue cells starve for energy despite having high blood glucose levels, which is called hyperglycemia. Okay, so GLP-1 receptor agonists include albiglutide, exenatide, liraglutide, semaglutide, and lixisenatide; these medications are also known as incretin mimetics, since they act by mimicking an incretin hormone that’s released by intestinal cells in response to a meal, ultimately stimulating a decrease in blood glucose levels.

On the other hand, the only amylin mimetic is pramlintide, which mimics a hormone called amylin that’s secreted by the pancreatic beta cells together with insulin after a meal to help decrease blood glucose levels.

Notice that both medication classes end with -tide, and are administered through subcutaneous injections. Once administered, both GLP-1 and amylin agonists have several mechanisms of action. First, they act on the stomach to slow gastric emptying, which leads to a delay in the delivery and absorption of glucose in the intestines. In addition, these medications can affect the hypothalamus to suppress the appetite.

In the pancreas, they suppress the secretion of glucagon, preventing it from increasing gluconeogenesis, or glucose production by the liver. Finally, GLP-1 agonists also stimulate pancreatic beta cells to secrete insulin in a glucose-dependent manner, meaning that secretion of insulin is proportional to the amount of glucose ingested.

This is why GLP-1 agonists have a low risk of hypoglycemia, in contrast to other anti-diabetic medications, such as sulfonylureas. Now, the most common side effects of GLP-1 receptor agonists and amylin mimetics are headaches, dizziness, and weakness associated with anorexia, nausea, vomiting, and diarrhea.

In addition, these medications can cause injection site reactions like pruritus, and less frequently, renal impairment and acute pancreatitis. Amylin mimetics have a boxed warning for hypoglycemia when used with insulin, so clients taking them are recommended to carry a glucose source with them all the time.

As far as contraindications go, GLP-1 receptor agonists and amylin mimetics should be used with caution during pregnancy and breastfeeding, as well as in children or elderly clients.

Precaution should also be taken in clients with thyroid, renal, or hepatic disease, as well as pancreatitis. Finally, in clients with gastroparesis, GLP-1 receptor agonists should be used with caution, while amylin mimetics are contraindicated.

Now, if a client with type 2 diabetes is prescribed a GLP-agonist like exenatide, or the amylin mimetic pramlintide, start by reviewing their most recent laboratory test results, including blood glucose, hemoglobin A1c, as well as their renal and hepatic function.

In addition, for clients prescribed a GLP-agonist, be sure to check their baseline thyroid function tests. Next, remind them that their medication is most effective when combined with an antidiabetic regimen, which includes following a low-carbohydrate and high-fiber diet, regular physical activity, and frequent blood glucose monitoring.