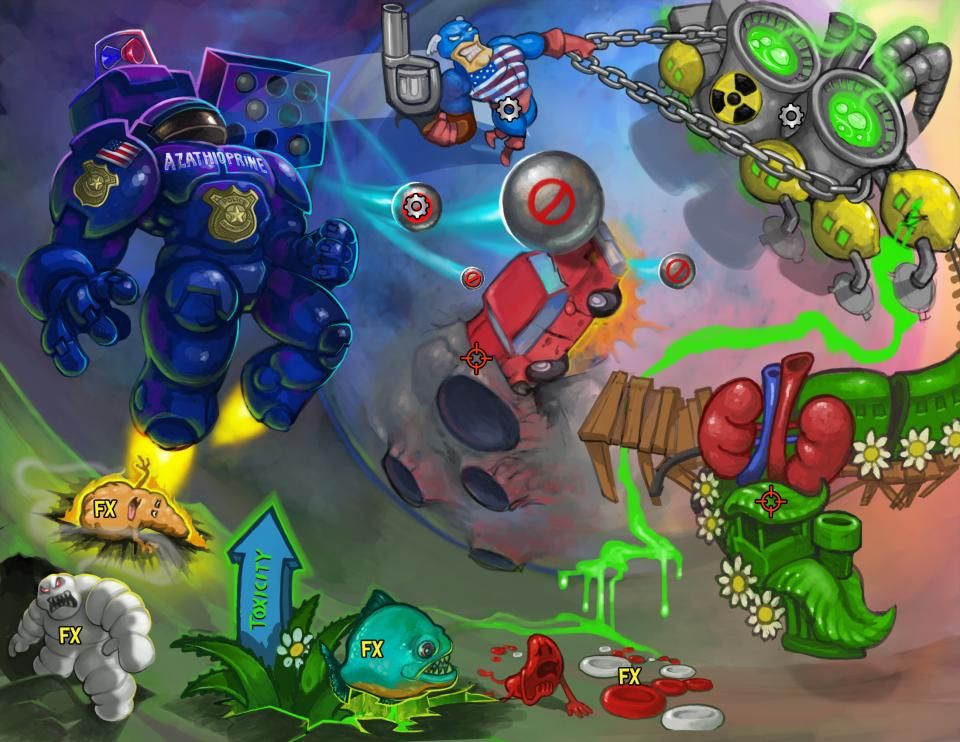 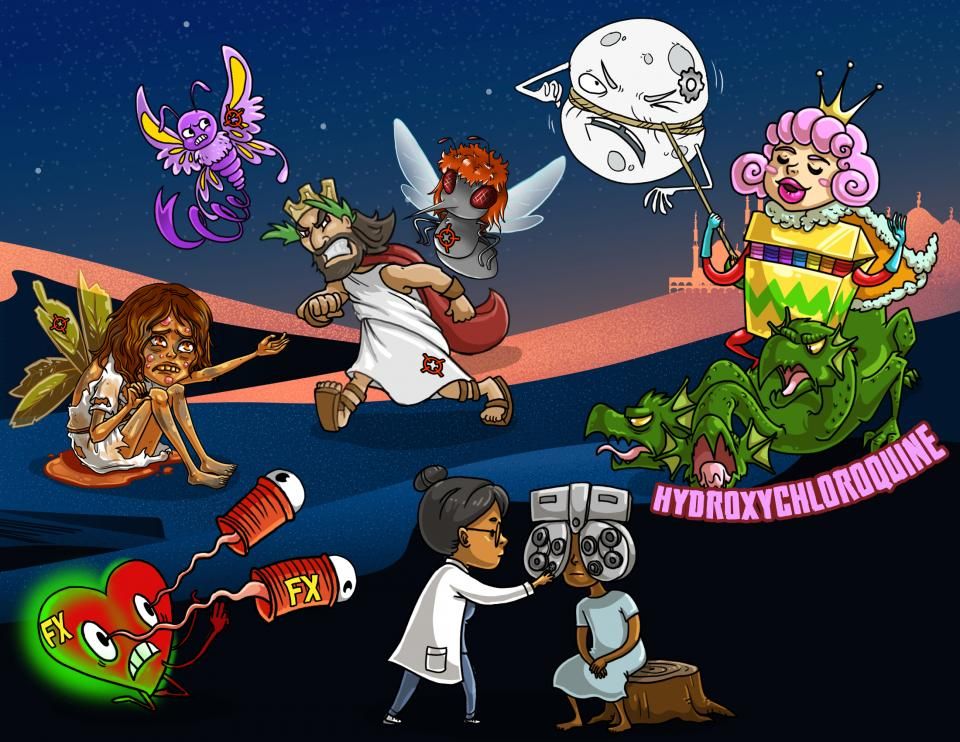 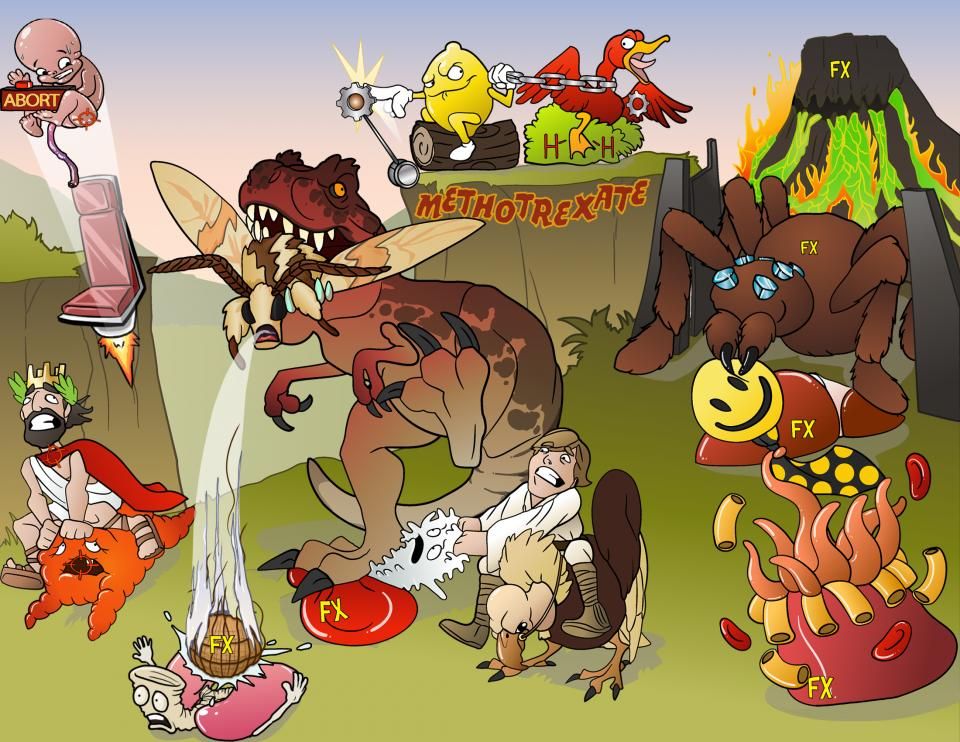 Nonbiologic disease modifying antirheumatic drugs, or DMARDs for short, are a group of medications primarily used to treat rheumatoid arthritis. The most commonly used ones are methotrexate, azathioprine, sulfasalazine, and hydroxychloroquine. Now, in addition to rheumatoid arthritis, each of these medications has its own set of indications. So, methotrexate can be used to treat psoriasis, inflammatory bowel disease or IBD, and certain cancers. Azathioprine can be also given to clients who have received a renal transplant to prevent rejection. Sulfasalazine is also indicated for IBD and HIV infection. Finally, hydroxychloroquine can be also used to treat malaria, systemic lupus erythematosus, and even some forms of arthritis, such as rheumatoid arthritis and juvenile idiopathic arthritis.

Now, nonbiologic DMARDs can be administered orally, subcutaneously, intramuscularly, and intravenously. Once administered, they mainly work by inhibiting the immune response and blocking the proliferation of endothelial cells and fibroblasts at the involved joints, slowing the progression of rheumatoid arthritis.

However, nonbiologic DMARDs can cause some notable side effects, such as bone marrow depression, which can lead to leukopenia and increased risk for infections. Other general side effects include gastrointestinal disturbances, such as anorexia, nausea, vomiting, and diarrhea.

More specifically, methotrexate can also lead to alopecia, photosensitivity, ulcerative stomatitis or painful mouth ulcers, as well as pulmonary fibrosis, hepatotoxicity, and nephrotoxicity. On the other hand, clients on azathioprine may develop alopecia, skin rash, vision problems due to retinopathy, as well as stomatitis, and hepatotoxicity. In addition, azathioprine has a boxed warning for increasing the risk of cancer.

Next, sulfasalazine can result in a skin rash, photosensitivity, and hypersensitivity reactions like Stevens-Johnson syndrome, or anaphylaxis, as well as stomatitis, and orange discoloration of the urine.

Finally, hydroxychloroquine’s most common side effects are vision problems due to corneal or retinal damage, and hearing difficulties due to ototoxicity. In addition, clients may develop alopecia, a skin rash, photosensitivity, and hypersensitivity reactions like Stevens-Johnson syndrome and drug reaction with eosinophilia and systemic symptoms or DRESS for short. Finally, some clients may also experience neurological side effects, such as headaches, nightmares, and even seizures, as well as cardiovascular side effects like heart failure, QT prolongation, and torsade de pointes.

As far as contraindications go, methotrexate is contraindicated in cases of leukopenia, thrombocytopenia, anemia, AIDS, chronic liver disease, and alcoholism. In addition, methotrexate has boxed warnings for bone marrow suppression, pulmonary, hepatic, renal, and dermatologic toxicity, as well as for its potential to increase the risk of opportunistic infections. Methotrexate has other important boxed warnings against its concomitant use with certain NSAIDs, since the combination may result in gastrointestinal toxicity, as well as its use during pregnancy, while precautions should be taken during breastfeeding. Lastly, methotrexate can cause neurotoxicity, which could be manifested by loss of coordination, difficulty thinking and speaking, or seizures.

Now, when your client with rheumatoid arthritis is prescribed a nonbiologic DMARD agent like methotrexate, first perform a focused baseline musculoskeletal assessment, checking for joint pain, stiffness, swelling, and range of motion. Then, review their most recent laboratory test results, including renal and hepatic function, CBC, rheumatoid factor, CRP and ESR; and be sure to confirm a negative pregnancy test for female clients of childbearing age. Lastly, review diagnostic test results, including X-rays and ultrasound.

Next, explain to your client how their medication will help to decrease their joint pain and inflammation as well as increase their day-to-day functionality. Instruct them to take their medication exactly as prescribed, once each week, on the same day of the week. If your client is taking the medication orally, be sure to demonstrate how to measure the correct dose using a calibrated oral syringe.