A 73-year-old man comes to the physician due to difficulty walking. The patient describes his gait as though his feet are “glued to the ground.” Additionally, he has been having difficulty finishing his daily crossword puzzle, which he attributes to impaired concentration. He has not experienced headaches, nausea, vomiting, or visual changes, but he has experienced episodes during which he has a sudden urge to urinate. The patient frequently has difficulty making it to the bathroom due to his gait dysfunction. Past medical history is notable for a subarachnoid hemorrhage that occurred several years ago. Vital signs are within normal limits. The patient’s Mini-Mental Status Examination score is 22/30 (normal: ≥ 24). Physical examination is notable for a broad-based and shuffling gait. Which of the following is the most likely cause of this patient’s symptoms? 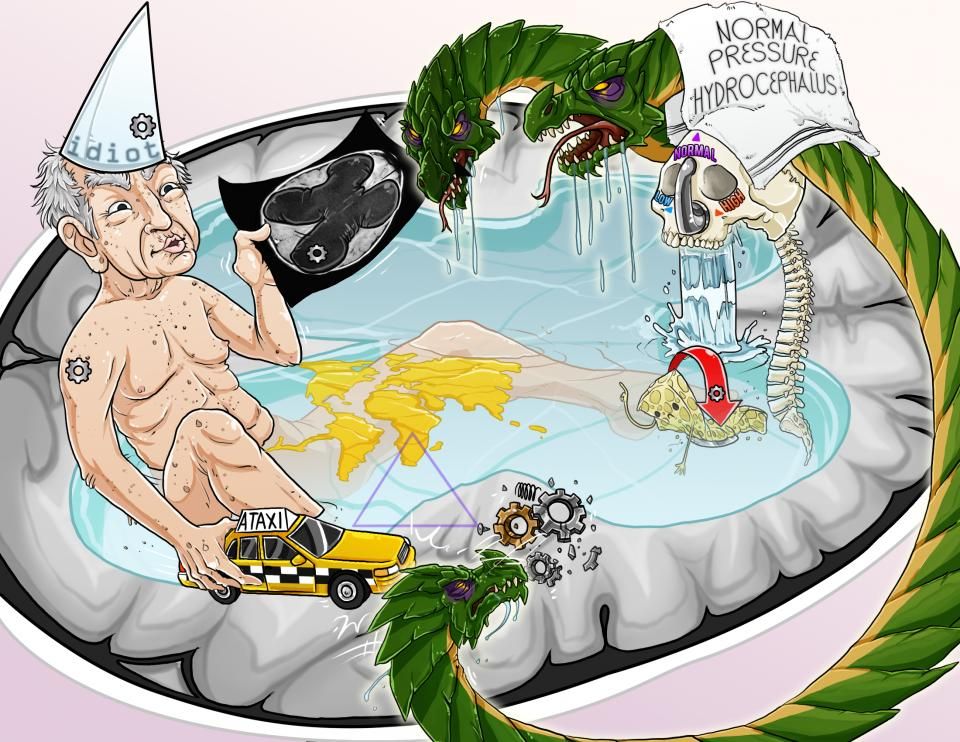 Hydrocephalus, which is also termed as “water on the brain”, is an excessive buildup of cerebrospinal fluid within the brain.

Even though the pressure on lumbar puncture is expected to be increased, in this case, it’s normal, which is why it’s termed as “normal pressure” hydrocephalus.

Let's start with some relevant anatomy. The brain has four interconnected cavities in the brain called ventricles, and each one contains a structure called a choroid plexus.

The choroid plexus is made up of ependymal cells which produces cerebrospinal fluid - a fluid that helps provide buoyancy and protection, as well as metabolic fuel for the brain.

It looks a bit like little fingers poking through, and these protrusions are called arachnoid granulations.

The pressure within the subarachnoid space is higher than the pressure in the dural sinus, so CSF flows through the arachnoid granulations is only in one direction.

Normal pressure hydrocephalus develops when cerebrospinal fluid is unable to get through those arachnoid granulations normally.

This process develops gradually and most commonly affects the elderly.

There are two types of normal pressure hydrocephalus.

The first type is an primary normal pressure hydrocephalus, where the cause is idiopathic or unknown.

The second type is secondary normal pressure hydrocephalus, where the cause is damage to the arachnoid villi which disrupts CSF reabsorption.

Some known causes of arachnoid villi damage are a subarachnoid hemorrhage and meningitis, both of which cause a tremendous amount of inflammation to the protective layers of the brain.

People with normal pressure hydrocephalus present with urinary incontinence, gait disturbances, and dementia. The excess amount of CSF can be temporarily drained through a lumbar puncture, but the long-term management is a surgical procedure called a ventriculoperitoneal shunt, in which a tube is inserted into one of the ventricles of the brain and directed to the abdomen, where the excess CSF can be absorbed.