A patient who is consistently seeking opioid medication without any physical symptoms of need, or a patient who seeks opioid prescriptions from multiple different providers may have .

A 25-year-old woman comes to the emergency department because of intense abdominal pain. She describes it as a sharp pain and rates it as a 10 on a 10-point scale. She says it started last night and cannot identify any triggers. She denies nausea, vomiting, diarrhea, or menstrual abnormalities. She reports having had previous episodes that have been relieved with oxycodone and requests this for the pain.

Physical examination shows bowel sounds are present, and there is diffuse tenderness to palpation in all four quadrants of the abdomen, without rebound tenderness or guarding. There is no organomegaly or masses noted. She declines a pelvic exam. Blood tests show CBC, UEC, TFT, LFTs, amylase, and lipase are all normal. Urine beta-HCG is negative. Which of the following is the most likely diagnosis?
Memory Anchors 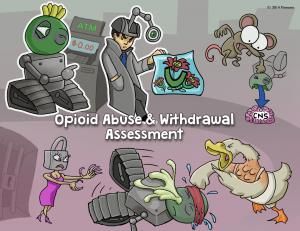