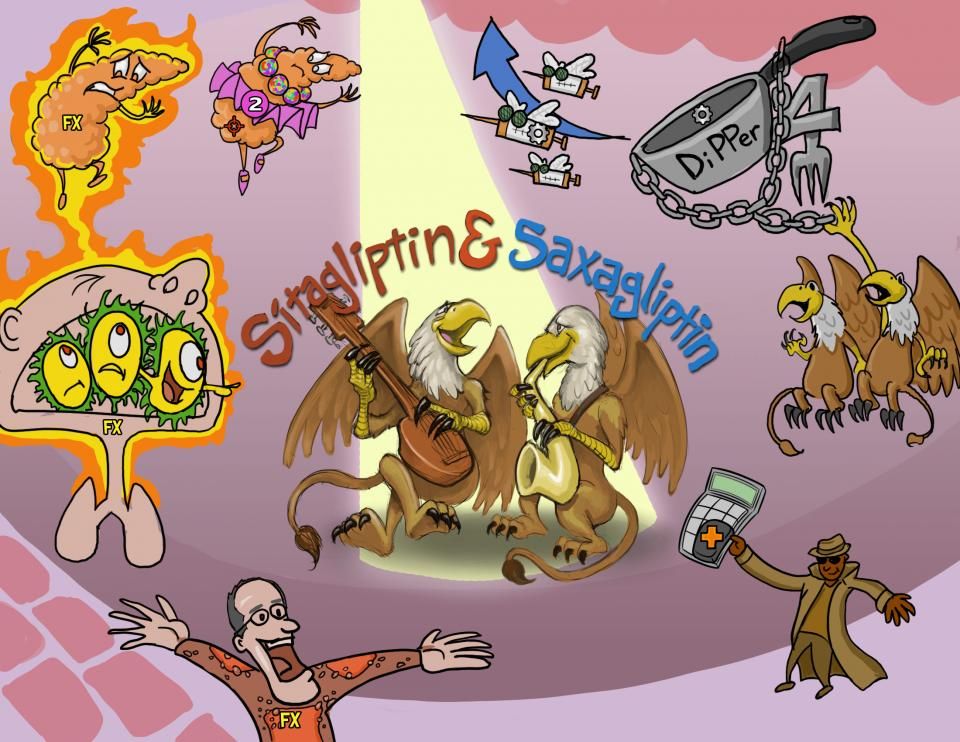 As a result, tissue cells starve for energy despite having high blood glucose levels, which is called hyperglycemia. Now, commonly used DPP4 inhibitors are sitagliptin, saxagliptin, linagliptin, and alogliptin. All of them end with the suffix -gliptin, which makes them easy to recognize!

DPP4 inhibitors are taken orally. Once administered, these medications inhibit the enzyme DPP4, which normally destroys the hormone incretin.

As a result, DPP4 inhibitors increase the levels of incretin, which in turn increases insulin secretion and decreases glucagon secretion. The end result is a reduction in glucose production by the liver, and thus a reduction in blood glucose levels.

Now, the most common side effects of DPP4 inhibitors include headaches, nausea, vomiting, and diarrhea or constipation, as well as mild infections of the upper respiratory or urinary tract.

In addition, they can increase the risk of hypoglycemia, pancreatitis, and acute renal failure. Less frequently, DPP4 inhibitors can cause life-threatening side effects, such as anaphylaxis, angioedema or Stevens Johnson syndrome.

As far as contraindications go, DPP4 inhibitors should not be used in clients with a history of pancreatitis, hypoglycemia, and angioedema.

They should also be avoided in clients with a history of diabetic ketoacidosis, or DKA for short, which is an acute life-threatening complication of diabetes.

Finally, precautions should be taken during pregnancy and breastfeeding, as well as in elderly clients, and those with other endocrine, hepatic, or renal disorders.

Now, if a client with type 2 diabetes is prescribed a DPP4 inhibitor like sitagliptin, be sure to review their most recent laboratory test results, including blood glucose, hemoglobin A1c, as well as their renal and hepatic function.

Next, explain how the medication works to lower their blood glucose level. Be sure to remind them that the medication is most effective when combined with an antidiabetic regimen, which includes following a low-carbohydrate and high-fiber diet, regular physical activity, and frequent blood glucose monitoring.