A 14-year old boy comes to your office with complaints of gradual onset of pain just below his right kneecap over the past month. He has just started playing basketball for the junior varsity team at his school and he is very excited for the season to begin. Unfortunately, the pain in his knee is exacerbated by all the jumping he has to do during practice. He feels the same type of pain when he is going up and down the stairs. He denies any preceding injury to the knee. Physical examination shows full range of motion of his knee, but the pain is reproducible when he extends his knee against resistance. Which of the following is the most likely diagnosis? 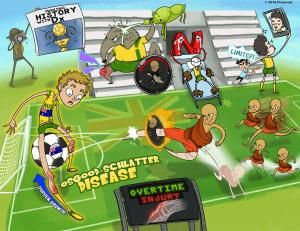 Osgood-Schlatter disease is an inflammation of the patellar ligament, right at the point where it inserts on the tibial tuberosity, resulting in painful swelling just below the knee.

So focusing in on the knee, the proximal epiphysis of the tibia, which is the upper end of the tibia that contributes to the knee joint, has a bony prominence called the tibial tuberosity.

This is considered an apophysis, meaning that it’s a bony prominence that serves as a site for tendon attachment.

The tibial tuberosity specifically serves as the attachment site for the patellar ligament, which is an extension of the quadriceps muscle tendon.

When the patellar ligament contracts, it extends the knee.

At birth, the proximal epiphysis consists of cartilage, but it contains an ossification center inside.

This ossification center begins to ossify or turn to bone between the ages of nine and fifteen, and becomes a bony tuberosity around the age of eighteen.

Osgood-Schlatter disease typically develops between the ages of nine and fifteen years old when the tuberosity hasn’t ossified yet, and therefore isn’t hard enough to resist traction of the patellar ligament.

So, this is why the disease is very common in young adolescents who play sports requiring the quadriceps muscles to contract repetitively, causing the patellar ligament to excessively strain on the not-yet-ossified tibial tuberosity.

This results in inflammation of the ligament at the point it inserts to the tuberosity, what is known as traction apophysitis.