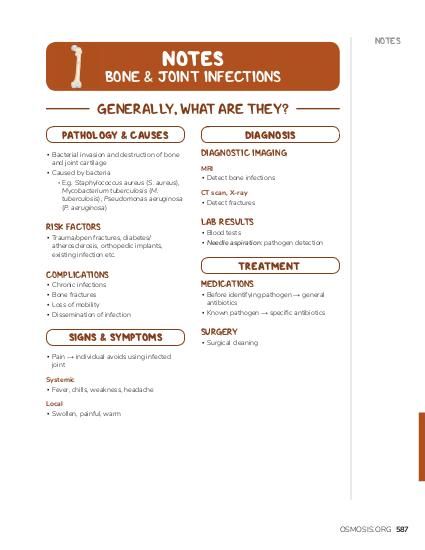 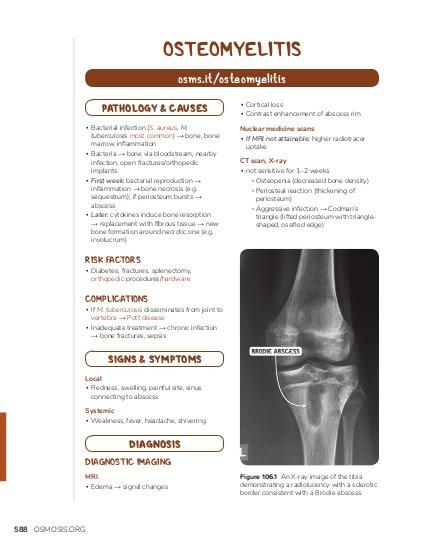 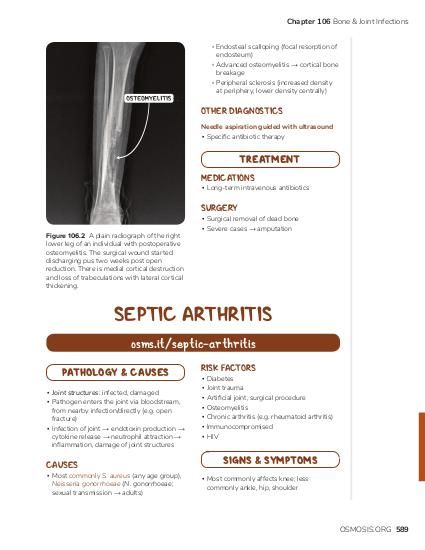 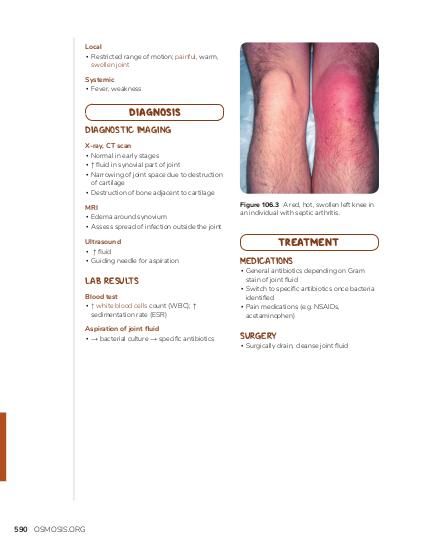 A 33-year-old woman comes to the clinic because of a left foot puncture wound 5 days earlier. She reports that she accidentally kicked a screw sticking out of a board in her kitchen. She denies fever or fatigue, but states she has felt nauseous because of the pain. She has applied bandages and antibiotic ointment regularly. Her temperature is 37.1°C (98.8°F), pulse is 80/min, respirations are 16/min, and blood pressure is 136/72 mm Hg. Physical examination shows she is otherwise healthy, but in mild distress. The wound is located on the medial aspect of the proximal 4th digit. There is mild erythema, fragile white skin, extreme pain to palpation, tenderness on the bone near the base of the toe, and a laceration that measures 3 cm wide and 3 cm deep. A swab culture is obtained. Which of the following is the most appropriate next step in management? 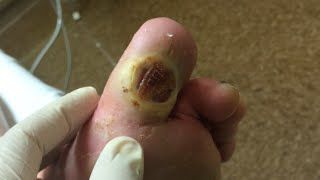 osteomyelitis of the toe 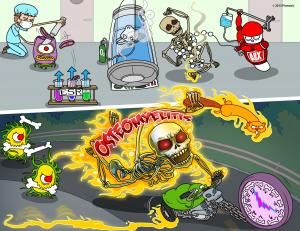 Osteomyelitis can be broken down. Osteo- refers to bones, –myel stands for myelo and relates to the bone marrow, and lastly, –itis refers to inflammation.

So, osteomyelitis is an inflammation of the bone or bone marrow, and it typically results from an infection.

Normally, if we look at a cross-section of a bone, we can see that it has a hard-external layer known as the cortical bone and a softer internal layer of spongy bone that looks like honeycombs.

There’s also another layer called the periosteum that covers the cortical bone - like the lamination of a basketball card - and it's where the muscles, tendons, and ligaments are attached.

If we zoom into a cross-section of cortical bone, we can see that it has many pipe-like structures called osteons running through the length of the bone.

Each pipe has an empty center called a Haversian canal which contains the nerves and blood vessels that supply the osteon.

At the outer-border of the osteon is a ring of cells called osteoblasts which synthesize bone.

Along with these cells are osteoclasts that break down bone.

Between the epiphysis and diaphysis, we have the metaphysis. It contains the growth plate, the part of the bone that grows during childhood.

In osteomyelitis, microorganisms, such as bacteria, reach the bone to cause an infection in a few different ways.

Bacteria particularly affect certain high-risk individuals like those with a weak immune system, and those with poor blood circulation due to uncontrolled diabetes.

In fact, a major way that bacteria reach the bone is through the bloodstream, and it's called hematogenous spread. For example, this might happen in a person who uses contaminated needles to inject drugs or in individuals undergoing hemodialysis that may be contaminated by a bacteria or even through the dental extraction of an infected tooth.

Through the bloodstream, the microorganisms may reach specific places in the body, and this mostly depends on the age of the person.

In older adults, for example, the microorganisms may reach the vertebrae and cause vertebral osteomyelitis. This usually affects two adjacent vertebrae and the interintervertebral disk between them.

In children, the metaphysis of long bones like the femur is commonly affected.

The second way that bacteria cause osteomyelitis is through trauma.

For example, in an open fracture after an accident, the bone may get exposed to the outside environment and come into direct contact with bacteria.

A third way is during surgery when there’s bacteria that’s introduced into the bone.

A fourth way is when an infection spreads from one area, like cellulitis - which is an infection of the dermis layer of the skin - to an adjacent area like the bone, and this is known as contiguous spread.

There can also be combinations of these. For example, when a prosthetic joint becomes contaminated with bacteria during surgery and then that bacteria contiguously spread to nearby bone.

Another example, is when people with diabetes mellitus who develop a severe vascular compromise. A small trauma to the foot can lead to the formation of a foot ulcer, which then becomes infected and spreads to the nearby bone.

Now, once the bacteria reach the bone by any of these routes, they start to proliferate. This alerts nearby immune cells - specifically dendritic cells and macrophages - that try to fight off the infection. This represents the acute phase of the disease and occurs over a course of weeks.

The immune cells release chemicals and enzymes that break down bone and cause local destruction. Usually acute osteomyelitis comes to a resolution - meaning that the immune system eventually destroys all of the invading bacteria.

If the lesion is not that extensive, and there’s viable bone the osteoblasts and the osteoclasts begin to repair the damage over a period of weeks.