A 15-year-old girl comes to the emergency department because of left knee pain. She states the pain has been increasing for the past 2 weeks. She also reports fevers, diffuse joint pain, and a history of sickle cell disease. Her temperature is 38.3°C (100.9°F), pulse is 88/min, respirations are 20/min, and blood pressure is 122/82 mm Hg. Physical examination shows the left knee is erythematous, warm, swollen, and tender to palpation over the tibial prominence. Radiographs of the knee show soft tissue edema and a large radiolucency in the proximal tibia. Which of the following is the most likely infectious organism? 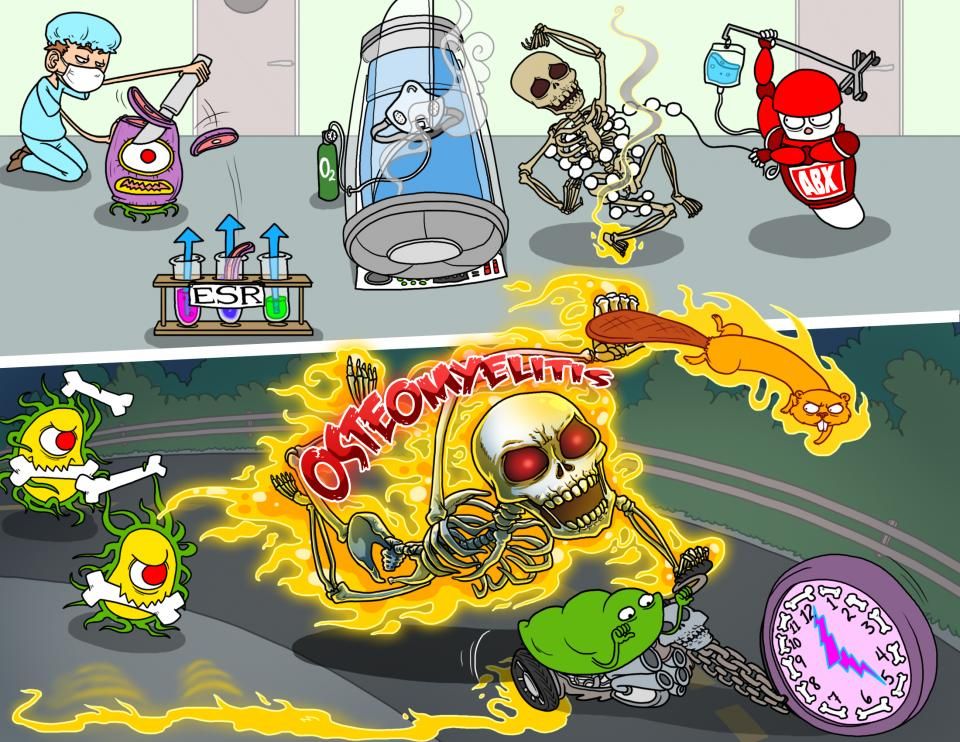 Bone and joint infections comprise mostly of osteomyelitis and septic arthritis, or a combination of the two.

In osteomyelitis, infections most often occur at the ends of long bones where they meet to form joints like the hip and knee, and in septic arthritis, they occur in the joints.

Diagnosis is mostly clinical, and it’s based on the rapid onset and localization of symptoms.

Local signs consist of warmth, swelling, point tenderness around a bone or joint, and cellulitis. Joint stiffness is also common, with single joint involvement being more characteristic for bacterial infections.

If the clinical signs raise suspicion of infection, the next step is asking for additional tests to confirm or infirm diagnosis.

Let’s start with osteomyelitis, which is an infection of the bone. It is usually caused by Staphylococcus aureus, with community-acquired methicillin-resistant S. aureus or MRSA accounting for many of the cases, especially in posttraumatic, post-surgical, and vertebral osteomyelitis.

Vertebral osteomyelitis is also caused by Mycobacterium tuberculosis in about a quarter of the cases.

Additionally, Salmonella species and Streptococcus pneumoniae are commonly found in those with sickle cell disease; Gram-negative bacteria, such as Pseudomonas species or Escherichia coli, are common in infections after puncture wounds of the feet or open injuries to bone, and Staphylococcus epidermidis in some of those with prosthetic devices.

The earliest signs generally depend on the age of the individual. In neonates, the affected limb may be limp and moving it might be painful but fever and other symptoms might be absent.

Older infants and children present pain, fever, and local signs around the affected bone such as edema, erythema, warmth, and some might even refuse to walk.

Back pain with or without tenderness to palpation overlying the vertebral processes is noted in vertebral osteomyelitis.

Later in its course, it can spread to involve the joints which leads to a painful, swollen joint with limited mobility. It can also spread to the soft tissue surrounding the bone which leads to abscess formation, to the veins where it causes septic thrombophlebitis, or the bacteria can escape into the systemic circulation leading to sepsis and even septic shock.

Initial evaluation can include plain radiographs, mostly to exclude other causes like trauma and foreign bodies.

Plain radiographs are usually normal or inconclusive early on, and it takes around two weeks to show typical findings like non-specific periosteal reaction and osteolysis. It can complement the information provided by other modalities and should not be omitted, even if more advanced imaging is planned.

Concomitantly, blood tests should be taken as well, including blood cultures to rule out sepsis and confirm a hematogenous infection.

If the plain radiograph is inconclusive or abnormal, and if blood tests show signs of infection, the next step is getting a CT or MRI.

MRI is more sensitive than CT, and it can identify abscesses and distinguish between bone and soft tissue infection better than other methods.

Radionuclide imaging with Technetium-99 methylene diphosphonate, which accumulates in areas of increased bone turnover, is recommended if there are multiple and unusual sites of infections like the hip.

The gold standard for the diagnosis is bone biopsy with histopathologic examination, tissue culture, and gram stain.

Histopathologic specimens may be obtained by percutaneous needle aspiration or open biopsy, particularly if surgery is required for therapeutic drainage and debridement.

A bone biopsy might not be needed if the blood cultures are positive, especially when there’s substantial clinical or radiographic evidence of osteomyelitis.

Now, treatment consists of antibiotic therapy and in some cases, surgical removal of infected and necrotic tissue.

Empiric antibiotics are usually given after at least one blood culture is obtained.

If methicillin resistance among community isolates of Staphylococcus is greater than 10 percent, vancomycin, usually 10 milligrams per kilogram every six hours, should be given.

Now, in those with sickle cell anemia and osteomyelitis, the primary choice for treatment is a fluoroquinolone antibiotic in adults or a third-generation cephalosporin like ceftriaxone in children.

When the infection is due to trauma, the primary antibiotics - usually nafcillin and ciprofloxacin, should have coverage for Staphylococcus aureus, coliform bacilli, and Pseudomonas aeruginosa.

In case of osteomyelitis with Mycobacterium tuberculosis, the choice of antibiotic is generally the same as for pulmonary infection, which is a combination of isoniazid, rifampin, ethambutol and pyrazinamide.

When pus is obtained from subperiosteal or metaphyseal aspiration, when an abscess is suspected based on MRI findings, or when antimicrobial therapy fails, surgical drainage is usually needed.

Second, septic arthritis is an infection of the joints and is also mostly caused by Staphylococcus aureus and Neisseria gonorrhoeae.

Septic arthritis tends to affect just one joint, usually in the lower extremity, and in neonates and young infants it is often associated with constitutional signs like malaise, joint stiffness, and in some can lead to adjacent osteomyelitis caused by transphyseal spread of infection.

In older children fever and pain are the most common, along with local signs such as swelling, erythema, and warmth of the affected joint, which are more common in septic arthritis than osteomyelitis given that joints are usually more superficial than bones.