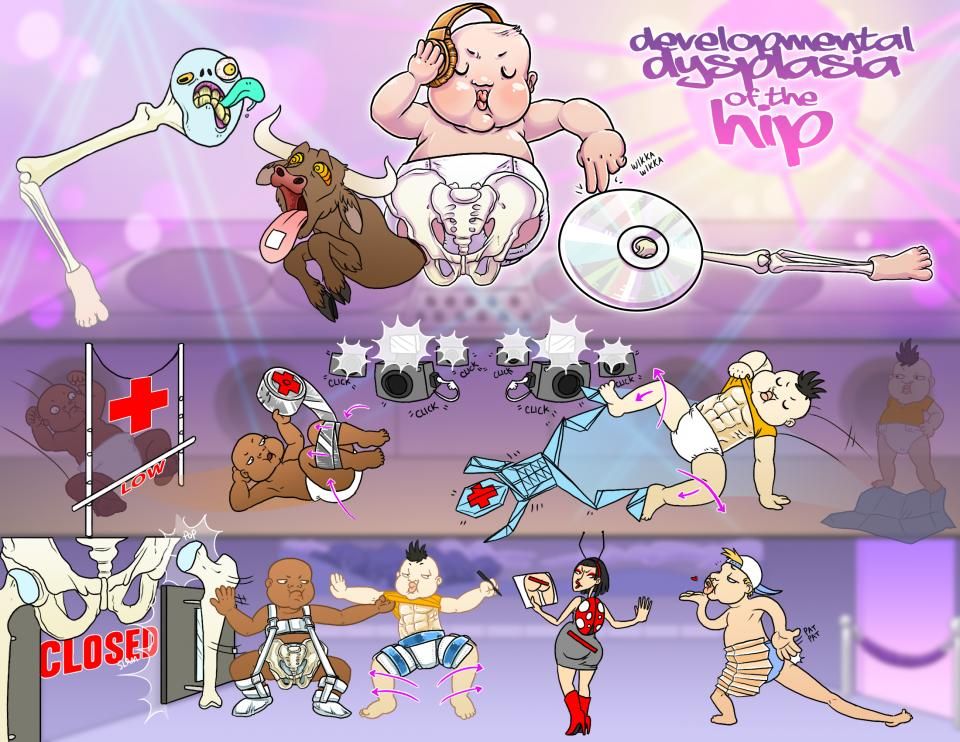 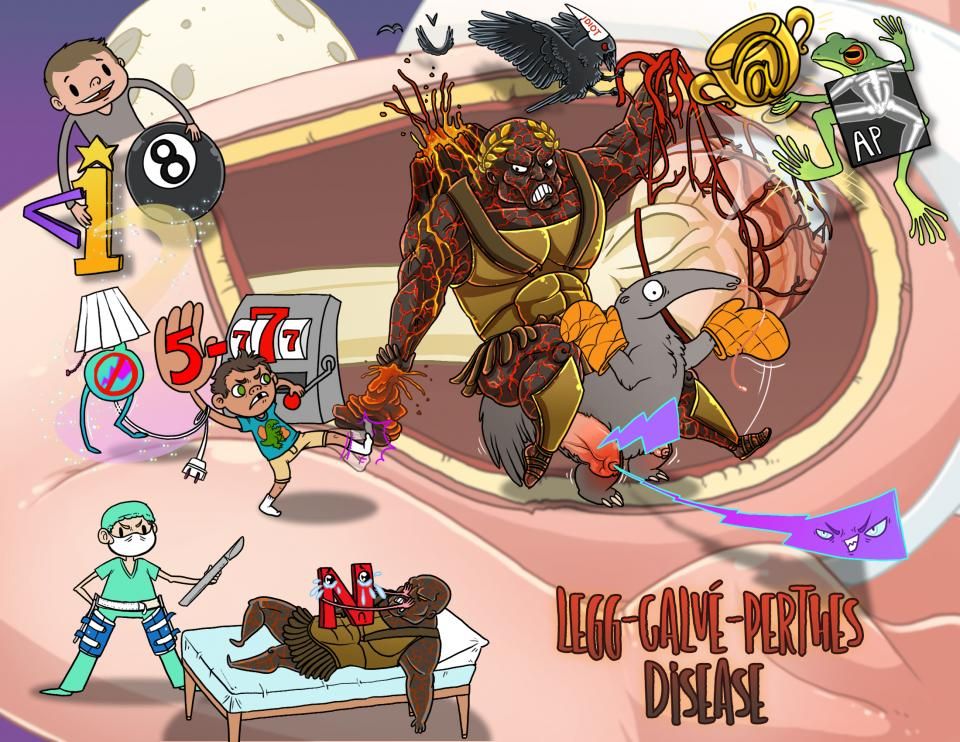 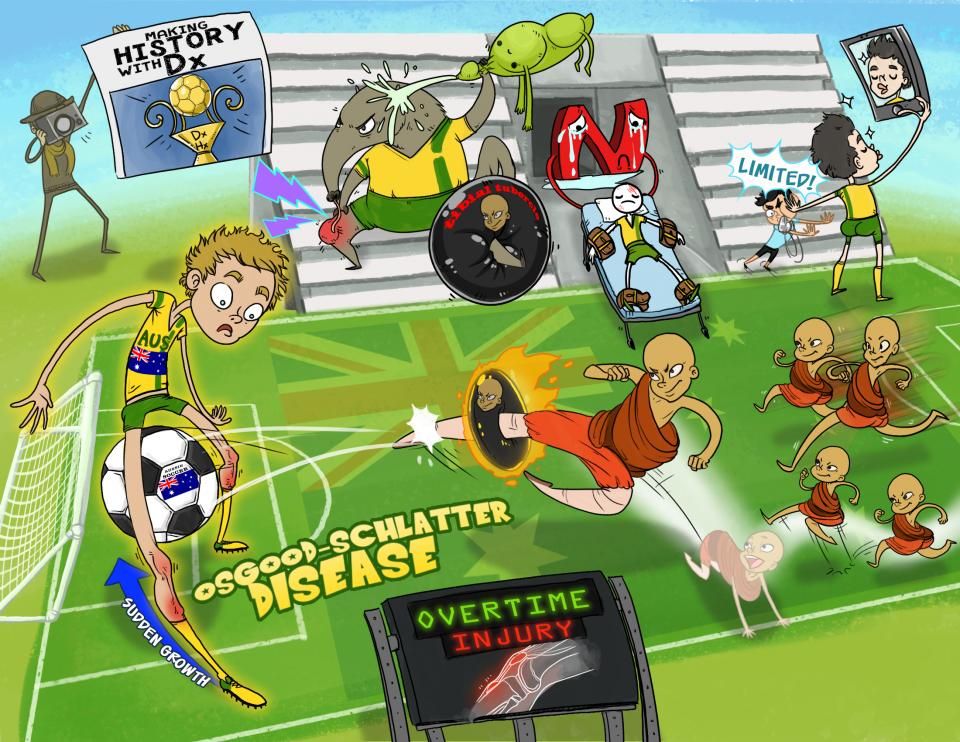 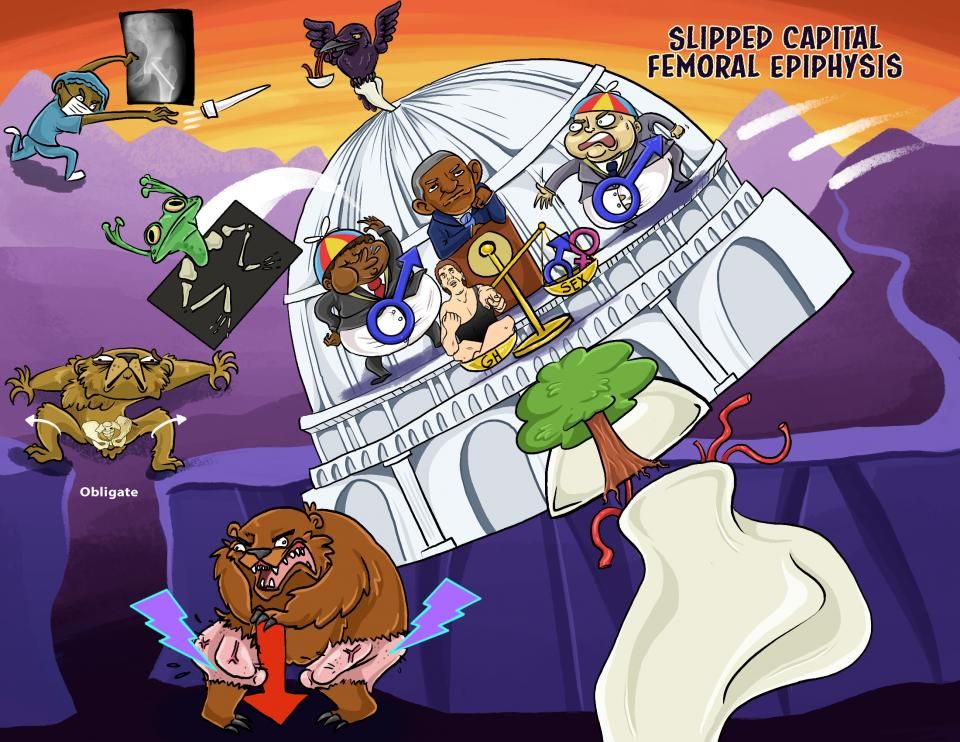 A 13 year old boy named Lucas comes to the clinic complaining of right knee pain, which gets worse when he is running, jumping, or climbing stairs. Upon further questioning, Lucas mentions that he plays basketball for his school team, and recently, he started training more intensely for an upcoming tournament. On physical examination, you are able to move his hip in all directions with no resistance or pain, but you notice that his right knee has a more prominent tibial tubercle, which is also tender to the touch.

Some days later, a 4 year old girl named Sophia is brought to the clinic by her mother. Earlier that day, Sofia’s older brother was swinging her by the arms. Since then, Sofia has been experiencing pain in her right arm when she tries to move it. On physical examination, you notice that Sophia is holding her arm by her body, and cries when you try to move it. You decide to quickly hyperpronate her arm, after which Sophia becomes able to use her arm again without pain.

Okay, both Lucas and Sophia seem to have some form of pediatric musculoskeletal condition, meaning a condition that commonly affects the muscles, bones, or cartilage of individuals younger than 18 years. For your tests, the most high yield pediatric musculoskeletal disorders include developmental dysplasia of the hip, Legg-Calvé-Perthes disease, slipped capital femoral epiphysis, Osgood-Schlatter disease, patellofemoral syndrome, radial head subluxation, and a variety of bone fractures.

Okay, let’s start with developmental dysplasia of the hip, or DDH, which is also known as congenital hip dysplasia. In DDH, the femoral head dislocates out of the acetabulum during development in utero. For your exams, it’s important to keep in mind that this is more common in twin or multiple pregnancies, where the fetuses have to share the space within the uterus, which may put a lot of pressure on them; as well as in firstborns, because the mother’s uterus is not as stretched out; or when the fetus is lying in a breech position within the mother’s uterus, with its buttock near the cervix at the time of delivery. Another situation that can lead to DDH is oligohydramnios, when there’s not enough amniotic fluid to expand the uterine cavity so that the fetus can have enough room.

Symptoms of developmental dysplasia of the hip may vary according to age. In a test question, look for a newborn or infant with legs of unequal length or asymmetric skin folds around the groin. On the other hand, older kids may present with painless limping or hip pain that can radiate to the knee.

Diagnosis of developmental dysplasia of the hip starts with physical examination. For your exams, you must remember two maneuvers. In the Barlow maneuver, the hip is abducted while holding the knee straight, which in the case of hip dysplasia, would cause the femoral head to pop out of the socket. On the other hand, in the Ortolani maneuver, the baby’s hip is flexed at 90°, and then gently abducted; if the femoral head is out of the socket, the Ortolani maneuver will cause it to slip back into the acetabulum, which would feel and sound like a clunk.

In addition, imaging techniques like ultrasound can be used in children younger than four months of age, so as to assess the position of the femoral head and the structure of the acetabulum. On the other hand, X-rays are recommended for children older than four months, as the hip cartilage begins to ossify and can become easily visible on X-ray.

Now, the treatment of congenital hip dysplasia depends on the age of the child and extent of the deformity. Before six months of age, abduction splints can be used for a period of one to two months, such as the Pavlik harness that holds the hip joint flexed and abducted. This helps to keep the femoral head within the socket to promote normal hip joint development. For those older than six months, closed, manual reduction of the femoral head into the acetabulum can be performed under anesthesia. If this doesn’t work, open, surgical reduction might be necessary.

All right, moving on to Legg-Calvé-Perthes disease, this is a hip disorder that occurs when the blood supply to the head of the femur gets disrupted. Normally, the head of the femur is supplied by three main arterial branches, which are the medial and lateral circumflex arteries, and the artery of ligamentum teres.

In Legg-Calvé-Perthes disease, the blood supply to the femur is disrupted, and this causes the bone to stop growing and die off, a process called avascular necrosis. The reason why this happens is not exactly known, which is why it’s also called idiopathic avascular necrosis of the femoral head. However, the main risk factor to keep in mind is repeated minor trauma to the hip joint, which might be associated with a child’s hyperactivity. In any case, over time, the femoral head becomes more fragile and prone to fractures. Over time, the weakened bone may lose its normal round shape and become flattened, so it can no longer smoothly rotate inside the acetabulum.

Symptoms of Legg–Calvé–Perthes disease most commonly present in males, between the age of 3 and 12 years and include a gradual-onset limp, with or without hip pain, that typically gets worse with activity. One high yield fact to remember for your tests is that the hip pain in Legg–Calvé–Perthes disease can sometimes refer to the knee, so these kids might initially complain of knee pain. On physical examination, remember that it’s common to find a limited range of motion, which is particularly evident for abduction, as well as internal rotation of the hip.

Diagnosis of Legg–Calvé–Perthes disease is based on imaging studies like X-ray of the hip, which can show fragmentation or flattening of the femoral head. However, for your tests, keep in mind that early on in the disease, X-ray can be normal, and in this case, MRI can be useful to confirm the diagnosis.

Treatment of Legg–Calvé–Perthes disease is typically conservative, and may include reduced weight bearing on the affected side, physical therapy, and pain management. In severe cases with extensive damage to the femoral head, surgery might be recommended.

Next up is slipped capital femoral epiphysis, or SCFE for short. Now, long bones such as the femur have a diaphysis or bone shaft, a metaphysis or neck portion on each side, and an epiphysis at each end, and remember that the proximal one is the femoral head. Between each metaphysis and epiphysis, there’s the physis, or growth plate, which is a cartilaginous structure that enables growth. Normally, as an individual is growing, the growth plate is relatively weak and vulnerable to shearing forces. Eventually, around the age of 16 in females, and 19 in males, the growth plate ossifies and fuses with the epiphysis.

In SCFE, increased stress on the growth plate causes it to break, and this leads the femoral head to slip away from the neck, just like a scoop of ice cream slipping off a cone. Now, keep in mind that the femoral head remains well held in the acetabulum by the joint capsule and the ligamentum teres femoris.So, it’s just the femoral neck that gets displaced anterolaterally and superiorly. And this is actually high yield!

Now the exact cause of SCFE is unknown, but what’s important to remember for your tests is that it is often associated with obesity. That's because the increased weight is thought to increase the mechanical force on the growth plate, causing it to break. In addition, hormonal changes that normally occur during adolescence or with endocrine disorders, like hypothyroidism, can make the growth plate weaker.

Symptoms of slipped capital femoral epiphysis typically present between the ages of 10 and 16 years, and include hip pain that becomes worse with activity, and may sometimes refer to the thigh or knee. This can also result in limping. On physical examination, remember that these individuals often also have reduced range of motion, especially with hip movements that involve abduction and internal rotation.

Diagnosis of slipped capital femoral epiphysis includes imaging studies like a hip X-ray. To better visualize both hip joints, the X-ray should be obtained in both an anterior view, as well as a lateral view with the individual sitting in a frog-like position. Some characteristic X-ray findings of SCFE include widening of the growth plate, as well as anterolateral and superior displacement of the femoral neck relative to the head. Treatment of SCFE generally involves decreasing weight bearing on the affected side, in addition to surgery to realign the femoral head and neck using a screw.

Moving on to Osgood-Schlatter disease, this refers to inflammation of the tibial tubercle, which is a small bony prominence at the proximal tibia. What’s important to know is that the tibial tubercle serves as an apophysis, or attachment site, for the patellar ligament, which arises from the patella. In this way, contraction of the quadriceps muscles can pull the patella and tibial tubercle, causing extension of the knee joint, and this allows you to walk, climb stairs, run, and jump! And what you need to remember for your exams is that at birth, the tibial tubercle consists of cartilage, but between the ages of 9 and 15, it begins to ossify and at around the age of 18 becomes a bony tuberosity. And that’s a high yield fact!

The cause of Osgood-Schlatter disease is not exactly understood, but it’s thought that intense physical activity that involves repeated sprinting and jumping, like when playing basketball and volleyball, can expose the tibial tubercle to constant strain and traction. This results in inflammation, partial avulsion or tearing, and fragmentation of the tibial tubercle, which is called traction apophysitis. When this happens over a long period of time, the chronic inflammation is followed by a healing process, which occurs by laying down new bone at the tibial tubercle, causing it to be more prominent.

Symptoms of Osgood-Schlatter disease typically present between the age of 9 and 14 years, after the growth spurt, and include progressive anterior knee pain. For your exams, what’s important to remember is that this pain gets worse when going up or down stairs, as well as with physical activities like running, jumping, and squatting. On physical examination, what you'll often see is swelling or a prominent enlargement of the tibial tubercle.

Now, for the diagnosis of Osgood-Schlatter disease, an ultrasound may reveal soft tissue swelling around the tibial tubercle. In severe cases, an X-ray might also show fragmentation of the tibial tuberosity. For treatment of Osgood-Schlatter disease, all that’s typically needed is pain medication, reducing physical activity, and applying ice to the tuberosity to reduce the swelling. That's because the disease is usually self-resolving once the individual stops growing. For severe cases, though, such as when fragmented bones break off and get trapped within the patella ligament, surgery might be necessary.

Next is patellofemoral syndrome, which affects the patellofemoral joint. Normally, this joint is formed by the patella that sits onto the trochlear groove on the distal part of the femur, and is covered by a slippery articular cartilage that allows for smooth movement when flexing or extending the knee.